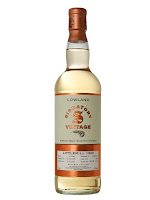 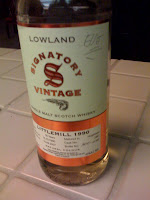 A bottle of Littlemill 1990 is seen on your left. The one I felt it necessary to write my name on is at your right. Why did I do this? Read on…

Just a bit o’blog to update readers on the single malt Scotch tasting my husband Eddie led in our home last week. The few photos that I have running down the right side of this blog, the neat before and after shots complete with open Pepcid AC box, were just the beginning of this teaser.

I will write a full column on all of the bottles we ended up opening, after being warmed up with the 6 we only planned to open, in two week in the West Ranch Beacon.

But the one that I liked has dwindled remarkably with Ed’s out-of town trip this week. So I must write while…well…there’s still some left in the bottle to make remarks about.

The first Scotch we tasted in travelling from the lowlands to the highlands of Scotland was the first time we had ever tried a Scotch from the Signatory collection:

Signatory is an independent bottler of rare Single Malts that would otherwise be lost to the blenders. These Malts are hard to come by, but offer a unique opportunity to taste rare offerings. Signatory selects their casks from large lots of the highest quality scotch. The balance of the casks are then sent back to the blenders. Light filtration ensures the 86 proof malts maintain their natural flavors. The malts are “all natural,”no caramel color is added to change the taste of the Scotch. Signatoryscotch is bottled as it comes from the cask to preserve the original flavor. Enjoy this rare collection of Malts chosen to represent each of the different regions of Scotland and make your own comparisons!
http://www.totalbeveragesolution.com/signatory/

I was slightly put off by the light color. It was really different for me. Even holding it up against my white tasting notes didn’t impart the usual dark honey hue. But there was a natural golden color, not “added”, as the photos above do show.

Trying the nose I found it to be sharp; adding a little spring water heightened it but not to the point of burning off delicate nose hairs and I detected floral notes. The taste had a sweet tinge while the mouthfeel was creamy.

So, there you go, just a sampling of something new for me…tell me was it good for you? Oh, yes, to answer the question I posed at the top of this: I was afraid the gentlemen tasters would like my Scotch too. Writing my name on the label was just a wee bit of insurance that it wouldn’t end up in someone else’s liquor cabinet. Though this bottle isn’t staying long in mine…tis empty.