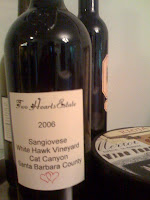 Susie Clark, of Two Hearts Estate, recently sent me news of a winemaker’s conference she and her husband Kerry attended. Tasting and talking to other home winemakers sounded very exciting and she agreed to allow me to run her news in an upcoming guest post.

This last weekend my husband Eddie and I were invited to taste some of their recent vintages. We hadn’t been up to their Castaic home and winery since last year. And that year proved fruitful for us all as the Clark’s met the Carpenters (over a shared story by yours truly). Chris and Jeannie Carpenter are also home wine makers, knew a slew of others in our valley, and organized the first Assistance League sponsored Sunset in the Vineyard event that highlighted private home winemakers.

This year, as last, Kerry had several Winemaker Magazine awarded vintages to try. And I jotted down a few notes during the tasting

We started out tasting with his 2008 Grenache Blanc, a Rhone white. We were immediately brought back a year; these wines were what we had come to expect, incredibly good. Next was a Rhone white blend of Grenache Blanc, Viognier and Marsanne (all Tablas Creek clones by the way). “It’s a blend of all whites,” Kerry began. “It’s a very drinkable Rhone white with characteristics of honeysuckle, spice and refreshing acidity.”

The Gruner came next with 12% alcohol. “I purchased the grapes and this is my favorite wine as it’s fuller and sweeter”.

A 2008 Muscat Susie lingered over. Again with Two Hearts Estate grapes, 11% alcohol. As 10 vines only produced about a gallon, the flavors of honey and fruit made it more than worthwhile.

We then started on the reds with a 2007 100% Primitivo from their hills again. With lots of spice and blueberry notes, his 60 pounds of grapes made 3 gallons. The nose was competitive with commercial Primitivo to me.

Eddie liked the 2008 Cabernet Sauvignon made from Washington grapes that had softened nicely after bottling.

And finally, a favorite, was the 2007 Syrah “Scorched Earth”. The Clark ’s had come home from vacation in time to see a slight dusting of ash on their grapes from the horrific fires last year. It did have a toasted flavor to it that wasn’t toasted barrel oak. Ed and I really enjoyed that one.

Susie makes time for gardening and the back yard, where a year ago landscaping was being done, now boasts several colorful flower pots, a beautiful clay pot fountain and spice garden. Kerry, on the other hand, only has time for farming the vines.

Kerry is now growing over a dozen varieties, made more quantity in 2008, with 2007 being the first time he was turning his own grapes into wine.

“Once the vineyard is ‘dialed in’ everything is okay and it’s just irrigation. But you’ve got to be in your vineyard a lot. We only take a few days off and then we need to work until it’s balanced again.”

We recalled that Kerry does buy some of his juice and he had something new on that front as well. “We can purchase flash-frozen grape juice. It has to remain at minus 10 degrees until you are ready to use it. I bought some Napa Sauvignon Blanc juice that way.” Eddie thought that, theoretically, you could be making the same wine as Mondavi if you can get the same grapes frozen and delivered. But it doesn’t end with the grapes.

“We also experiment with yeast, how much or how little we add. The same goes for sulfites. Sulfites reduce oxygen damage and kills bugs. We follow a formula and you know if a white wine is too gold that there was probably oxygen damage. If we siphon out a little wine to taste, we may need to fill up the the fermenting bottle with marbles to displace space, raising the wine levels and keeping oxygen out. It’s all chemistry. And it’s Susie’s nose that’s more reliable than mine.”

Susie’s guest post coming up soon tells of the Clark ’s recent attendance at a winemaker conference. “There are people there that ‘fix’ wines and wine labs that you can send a sample of your wine to (or they come to you). Then they tell you what you need to do to repair a wine instead of throwing it out or losing your reputation.”

Though the Clark’s are not concerned with their winemaking reputation they are invested in learning more and creating better vintages with each year. The last thing they’ve done besides, planting, farming and studying chemistry is to allow their dog Boomer his opportunity to assist. Because, as we finally rose to leave, it was Boomer that tore out the front door, ran up the hill and zoomed through row after row in the ever enchanting part of winemaking for a dog: chasing rattlesnakes, rabbits, quail and crow. Things sulfites wouldn’t stand a chance against.