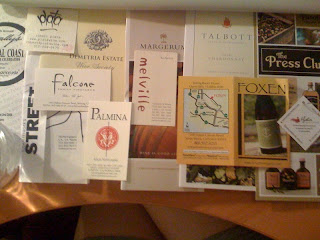 When Michael Bonaccorsi passed away, his death rocked the close knit Southern California wine community. Not only was he just the twentieth American to be awarded the Master Sommelier Diploma, and was Sommelier at the original Spago Restaurant, and then the Beverly Hills location, but his winery. Bonaccorsi Wine Company was making a name for itself as well. He died at the age of 43.

In 2004, The Michael Bonaccorsi Scholarship Fund at UC Davis was created in his honor. Annually, Wally’s Wine & Spirits in West L.A. holds an event to raise money for this fund. I had the pleasure of attending the most recent event.

When I got there, it became evident to me that, even though the event is billed as Central Coast, it was mainly southern Central Coast, which meant lots and lots of Pinot Noir. I am sure they were all very good – the ones I tried were certainly tasty. But, when I am not drinking Zin, I am pretty much stuck in the Rhone Zone, and I began my search for Syrahs and the like.

And I was not disappointed.

The Piedrasassi 2007 Syrah Rim Rock Vineyard was pretty incredible. It had just been bottled and didn’t even have a label on it yet. It had everything I look for in a Syrah, great nose, wonderful flavor and a long finish.

But there were others as well, such as the Syrah from Falcone Family Vineyards, which is the private label from the winemaker at Rusack. The non-vintage Annate blend was delicious as well.

And it was great to taste the blends being poured by Linne Calodo from Paso Robles.

Finally meeting my Facebook friend Dave Corey and tasting his CORE wines was a highlight as well.

Not to mention the food. Several L.A. restaurants as well as ones from the Central Coast were serving, including my favorite from Paso Robles – Artisan.

But the best part of the day…

I’ve known Eve for some time. I’ve been a fan of her writing, we’ve exchanged tons of emails, and I have recently been granted the opportunity to guest-post on her blog. And, she was my first Facebook friend, being the one to encourage me to sign up in the first place.

But, we had never met in person. Last Sunday, we had the opportunity to spend a few hours together, talking about the wine, the food, and a bunch of other stuff. This, to me, is what wine should be all about, sharing it with friends and family, with plenty of food and conversation, not trying to rate it in some sterile environment but enjoying it as part of life.

See you at Rhone Rangers, Eve, and your readers as well. [I’ll certainly get my Syrah fix there!]

MY TURN:
I let Michael have top billing because his post came in before I even sobered up. It was nice putting a face (and a driver!) to my oh-so-pleasant poster. It will be the beginning of a great friendship. And, to keep things even, I did ask Rusty Sly to come with me to Rhone Rangers this Sunday but…he wasn’t available. (Yes, I will ask him again..got to be polite!)
Anyway…the photo I put on the top of the post illustrates MY selections from the Wally’s event. I told myself I was going to try wineries that I hadn’t tried before. So many wineries have small productions that they don’t always get the attention each deserves.
Melville Vineyards & Winery (Lompoc) 2007 Pinot Noir Carrie’s
Falcone Family Vineyards (Solvang) 2007 Syrah Falcone Family
Palmina (Lompoc) 2005 Nebbiolo Santa Barbara County
Foxen (Santa Maria) 2006 Syrah Williamson-Dore
Plata Wine 2007 El Jefe Blue Label
Demetria Estate (Los Olivos) 2006 Cuvee Constantine Red Blend
Hahn Family Wines 2006 Hahn SLH Pinot Noir
Talbott Vineyard (Santa Lucia Highlands) 2006 Pinot Noir Sleepy Hollow
Margerum Wine Company (Santa Barbara) 2006 M5 Rhone Blend
Brander 2008 Cabernet Sauvignon
I also did some damage to the food and will run more photos in a separate post:
Sushi Roku, Hungry Cat, Pasolivo, Full of Life Flatbread, Spago, Cut, Street, Hitching Post 2, Bouchon Santa Barbara, Pizzeria & Osteria Mozza..
(I actually texted my husband Eddie that had to work at the fire station that day…to try and get him to “run a crowd control check” and really check out the food. He has integrity…so he only got photos. Phooey.)
Thank you Michael for covering all that I didn’t. Readers, what do you think? Does Eve Wine 101 benefit from having more back-up? Dang, I do!