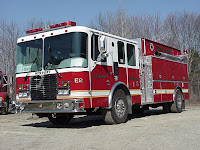 Our Price for Heroes (From my newspaper archives over 11 years ago)My husband announced his intention of returning to a real fire station recently. He has had a varied career as a firefighter these past twenty years. Some of which was spent in fire fighting and some, thankfully for me, have been spent doing other fire department related jobs.

My husband started out as both a firefighter and paramedic, and as a rookie fought many a hi-rise (including rappelling from a helicopter to the top of burning downtown buildings.) as well as delivered many a baby (his most eventful being the breach in a sputtering helicopter over Catalina.) He has programmed LA city’s computers, moved up the ranks to captain and became a member of the swift water rescue team.

Albeit dangerous jobs, excluding computer programming only if you don’t have an impossible budget for approval, none so dangerous as riding a fire truck into anywhere.

My initial, and continuing, reaction to his move has not been good. You see if you’re a firefighter, know a firefighter, are related to a firefighter, or even just kept up with the news you know that their mortality rate, for at least this year, stinks.

It’s difficult not to share your worries with your loved ones but you force yourself not to because you don’t want to jinx or worry them in their day to day tasks. Because for firefighters day to day tasks usually, eventually, include a degree of danger.

In the early days my husband shared stories like war wounds. Now that we have a family his stories are edited for content. Kind of like bringing an R rated moved down to PG for all audiences. And it’s not my three-year-olds ears that he’s concerned with; it’s mine. He can almost feel, like a racing pulse, my sentimentalities as a new mother. My little family is so precious to me; just walking out the front door puts any one of us in jeopardy. He can understand, and sometimes even sympathize with how I feel but he handles it differently.

When visiting at the fire station there is a little thing they do to let everyone know there is a civilian in the station. They call out the words, “Soda Pop!” over the PA system. I used to think that was so they watched the profanity, cleaned up the bathroom and stopped the shoptalk. Through the years I’ve come to learn that firemen don’t need to use profanity; the rookies keep the bathroom floors clean enough to eat off of (don’t ask; they’re not getting hazed anymore) and all that’s left is shop talk.

That’s what is edited because most of the visiting lay people haven’t ever fought a war. We don’t have nightmares about bodies.

We’ve never delivered a crack baby. Never burned our ears. Been swept down into a net during swift water rescue training. Had city cutbacks lessen our ranks at the same time we are facing brush season. Been woken up by alarms and bright lights in the night. And the unspoken grisly parts, that we are left only to imagine, are for their eyes only.

So why does my husband, your friend, son, daughter, husband, wife, etc. etc., have to push the edge of the envelope? Because that’s what they do. And can you imagine for a moment what kind of “spunk” it must require to do this?

For my husband the most I can get out of him is that the morale of the department is low right now. My husband is just one captain out of thousands across our city, county and states that may be feeling the same way. All members are irreplaceable. All members are never forgotten. All members are prayed for. Those that are lost and those that continue to carry on.

And fighting fires, alongside other members, is probably the best morale booster there can be. He would never suggest that that was his personal reason. He would never allow himself that credit. But if your husband wants to get back on that fire truck or helicopter you can only standby. And I think that’s what all the members are “Soda Pop” -ping about right now.

They are by nature, driven to do it. Daring rescue attempts don’t appeal to me any more than entering a burning building does. But then again I’ve never been a hero.

Consider an athlete being told that running is bad on his knees. Does he stop running? Probably not. Does he find another sport? To do as well, yes. Does he get another opinion? No, he doesn’t take the time. Does he just quit? Never.

Eager to be our heroes at our price.

The fire captain’s funeral procession was the most beautiful thing I’ve witnessed in my entire life. The wives were asked to walk behind the LA city members and the members from other cities fell in behind us. My friend Sheryl remarked that she would have liked to see more wives. Silently so did I.

It was a long procession. Within a few blocks our heads were suddenly pulled to the right. We continued to walk in this cockeyed manner until we could no longer see the end of fire trucks winding down Western Avenue from the 405 exit. It was a momentous contradiction to see them proceed slowly and silently to join alongside of us. The only reminder that they active actual fire trucks were the bright and constant flickering of red and white lights. As well as the grandeur of their united strength.

When we reached the fire station we got a glimpse of very young explorers finishing up on the last minute touches. Another glimpse and we saw the frozen looks of young members standing at attention over their lost father figure, their rescuer, their mentor, their captain. This man was leaving more than one family behind.

We couldn’t hear what was being said when we halted at his station. The only break to our silence was the sound of sniffling and then slowly, a constant rumbling that seemed to be approaching. Like a wave our heads began to turn again first to the right and then upwards to the sky. The helicopters were flying overhead in formation. One of which, including it’s crew and victim, we were going to be forced to bear the loss of in just a few more short days.

We then continued our walk to the huge church in south Central that would serve to house so many mourners. I couldn’t help myself then to sweep my head back and forth as rapidly as possible to acknowledge all of the members that had now left their fire engines and lined our processional on either side. Luckily most were wearing sunglasses; I couldn’t have borne to see their eyes.

Once inside the church I could only imagine my husband hunting for me, silently with his eyes, as I did for him. Sheryl found her’s. I was ushered in with the other members and took my seat while holding one open. I never gave that seat up, and strangely, no one pressed me for it. I still thought that I would be fine but that was before the service began.

“Too many similarities” I was thinking as the women that were working the funeral silently strode up and down each aisle offering Kleenex. The music was too beautiful, the photographs too real and the chief’s eulogy much too painful.

When I left the church I felt like an alcoholic leaving my first AA meeting in search of fresh air, a cocktail, a smoke and someone that I recognized. I hurried back to the red department car we had driven in. Apparently I wasn’t the only one feeling this way. As firefighters strode past me faster than they had before, some were telling jokes while some were undressing; it was a clear attempt to lighten their loads.

Then I saw my husband, pulling off his captain’s coat and smiling at me. “Paul is schmoosing some chief. He says he knows a great place around here for Mexican food. And you can have a margarita.” Without words, and during a long hug, I whispered into his bad ear, “ I missed you in there, it was too hard.”

The KFWE is the destination for wine and food lovers alike, affording … END_OF_DOCUMENT_TOKEN_TO_BE_REPLACED