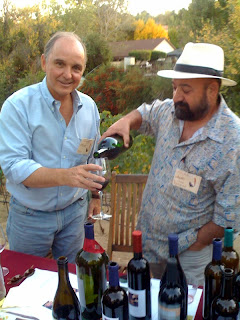 (This year’s event is on November 8, 3-6pm, order blank for tickets is in post preceding this one!)

While the sunset promised by The Assistance League of Santa Clarita for their inaugural Sunset in the Vineyard wine tasting was scorched by recent wildfires, they still managed, quite nicely, to provide a beautiful backdrop to a very different kind of tasting. You were unable to purchase any of the wines served there, and most were not available for purchase, just yet, anywhere.

It was a unique event, with a gathering, for the very first time, of SCV private vineyards and wine makers serving local artisan wines.

Several tables stretched between two private homes, making it easy for guests to linger wherever their glasses desired. And if you wanted you could also tour some commercial wine tastings; as the Assistance League assured everyone would be more than satisfied. Some of the more known wines served included Folie A Deux Manage A Trois, Fess Parker, Coppola, Vina Berri and Marques de Caceres.

When I realized how much territory I had to cover with wine makers from our very own Newhall, Castaic and Bouquet Canyon, I pressed on.

“We do not own a vineyard,” Patty Connolly of Les Deux Chats Cellars began. “Instead we buy our grapes from high quality vineyards in both Paso Robles and Lodi and transport them back to our home in Valencia where we make our wines. We have been making wines since 1997 and our dream is to turn our hobby into a business and go commercial in the next few years. Our current 2008 vintage includes Zinfandel, Syrah, Viognier, and Roussane.”

Chris Carpenter, with his glass wine thief, was drawing out barrel samples of his Cabernet Tempranillo blend from Santa Ynez grapes for Compa Vineyards. His 2007 Lost Pruners 2007 Cabernet was a favorite.

Kerry and Susie Clark had provided several varietals from their Two Hearts Vineyard in Castaic. The 2006 Cabernet from Yakima Washington I was lucky enough to enjoy again. (I had interviewed both the Carpenter’s and the Clarks in a recent article on local winemakers.)

Jeff and Joan Jacobson, you want to remember their names as Jeff is the wine chair of the yearly COC Wine Classic, brought their neighbor, Leah Granen. “Jeff is the pro but I just say ‘I like it’ when I drink with him.”

I spent about a minute perusing two bottles for auction: Opus 2002 and Insignia 2002. Jeff joked that I didn’t need to bid; I guess I must have mentioned our membership with Joseph Phelps which we joined to insure receipt of Insignia. But at this point I was wondering how I could become a member, with my local winemakers.

Dora Zavala, supporting the Assistance League while away from her Soroptimists for the afternoon was with Rose Chegwin, who liked Juan Alonso’s award winning Rosé.

Alonso, with the best local wine list available per the Wine Spectator and Eve’s Wine 101 at his restaurant, Le Chene, was pouring wine with the help of his lovely wife Claudia, from 7-13 year old vines. The unlabelled 2005 Rosé Grenache had a nose I had trouble identifying – which is sometimes the folly of a wine drinker nearing the end of her day – but I loved it. He followed that with his 2005 100% Grenache and a 2004 Felix Cuvee Grenache Syrah blend.

Bouquet Vineyard wines were described as “So good!” by taster Dawnelle Cook. I found myself unable to pour out any of the 2005 Cabernet I had as well. The father and son-in-law team, Carmen D’Argenzio and Danny Mascari were flanked by Carmen’s wife and daughter, Rita D’Argenzio and Nina Mascari. The Italian winemakers, Carmen himself making wines for 20 years, have had their vineyard since 1994. The family affair proved to be a labor of organic wines, made without sulfites and using the “old world” method of winemaking. Moving right along…

“It’s all about a passion for winemaking,” began Roman Weiser of Ben’s Crush Winery (Cellar Masters Silver Medal for 2005 Cabernet Franc Merlot blend). “It’s refreshing as we are not here to sell anything, just to contribute to a good cause and share our love for wine. So Chris Carpenter and I take special pride when our wine label wins Honorable Mention in Wine label Competition of Winemaking Magazine”. Trying their Mantis 2005 Syrah aptly named for the Preying Mantis that flew in during the naming process, Mara and Steve Prutting called it their Mothership.

“Stop making nice with the press and pour me some Zin” Marlee Lauffer, of Newhall Land, got caught saying and agreeing to let me quote as I headed over to Dragonfly Winery. Their newly released Batch #2 Zinfandel will closely resemble the Zin they plan to release only to SCV bars and restaurants very soon. “I like their award winners,” Tamara Brown said, “All of them.” “They are the best so far,” Bruce Brown agreed. “The winemaker did it justice.”

The last winemakers to visit, Tomas and Jenny Lukas’ Vineyard, was surrounded by well wishing neighbors. They were happily drinking what they enjoy at gatherings: both 2006 Prima Syrah Zinfandel blend and a 2007 Bob Cat Red Syrah.

“The Lukas’s are amazing cooks,” raved Rena Tarrant. “And friends and winemakers.” For some reason I felt that statement like an echo. As local winemakers, in the business of making and not selling wine, do it for their friends. And I believe we made a lot more new wine friends this day, via the Assistance League.