A couple of weeks ago a friend of mine was an embarrassingly 40 minutes late for a girls night out at Frankies.

Instead of leaving, I waited it out as her text to me was “Order wine” which to me translated to “Order wine for me to pay for”. So, I perused the wine list. Frankie’s has a decent wine list, and even though I normally have a selection from their fab fresh oyster bar with a martini, I acquiesced to her demands.

I then spied Lee Yoon, owner of Lee’s Wine Bistro, trying to enjoy a quiet dinner out with his family. It slowed me down for a nanosecond. I had remembered that my gal pal frequented Lee’s and he may know her tastes in wine better than I did. He didn’t disappoint. My friend was a Cab fan only…and Lee picked out something in the $90 range. (Lee, if you can recall it please remind me what it was!) Well…I could only pray she would be even later…as the wine needed nothing to pair it with – YUM! (I couldn’t order dinner now too could I? I could only “start” on the wine…) It was perfect, what I would hope to expect from and $90 bottle.

So, a few weeks later, and lamenting my evil-hand, I returned the favor and brought my friend 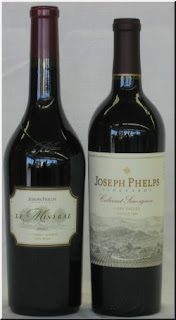 a Joseph Phelps 2002 Cabernet when we met at Cavi for no-corkage Thursday. (The wine is pictured here next to my everyday Mistral wine from a former post). We had done one of our locker clean-outs at home and had more than one bottle moved to our everyday rack. Thought husband wouldn’t notice the removal and my friend would feel…less…used.

Neither of us actually felt a thing as the wine was a perfect send-up to the carnivore delights Chef Tonino had prepared for us. It was perfectly balanced and had aged more than properly in our cellar: it was a standout.

But wait. You guys know me better than this don’t you? I’ve gotten one nice bottle out of guilt, and stolen another. Will my evil-doing see no end?

This week I was invited to the same friend’s home for a little “Holiday Hen Party”, aka a “Women’s Only” shindig.

I asked my husband what I should bring. He asked who it was for. And, as I had told him of her taste for Cabs what do you think he suggested?

Yes, we are now completely nonplussed – at home – in the Joseph Phelps 2002 department. My only hope is that hubby doesn’t check the clipboard once the bottles are moved from the cellar to the every day rack. And, you can bet, that during the holidays I did my best to get through other Phelp’s vintages to muck things up as much as possible.

So, you think he’ll read this post? Am I finally stepping over the line? Do you want to be late to meet me over wine sometime? hehehehehehe

LOVINGSTON, Va./PRNewswire/ -- Virginia Distillery Company and members of the … END_OF_DOCUMENT_TOKEN_TO_BE_REPLACED