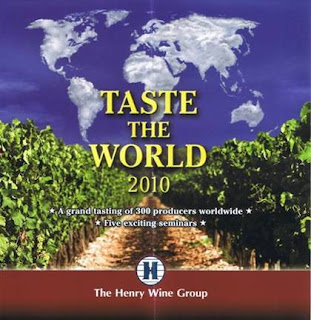 The Henry Wine Group is a US-based wine importer, wholesaler, and broker. Recently, as a guest of All Corked Up [www.allcorkedup.com], I had the opportunity to attend their TASTE OF THE WORLD 2010 trade-tasting at the Beverly Hills Hotel.

Upon entering, I was handed a 264-page Tasting Book. The event is billed as “a grand tasting of 300 producers worldwide”. While I did not actually count the number of wineries represented, I have no doubt they did not exaggerate. Along with the incredible wines being poured, we were provided with crackers, breads, various cheeses, and other noshes to help keep our palates fresh, along with plenty of water.

It was a great opportunity to taste some terrific wines as well as talk directly with the winemakers.

I did my best to keep up with the pros, although I clearly need to work on my spitting technique.


Ancient Peaks: [Paso Robles] 2006 Oyster Ridge – this is a blend of Cabernet Sauvignon, Petite Sirah, Syrah and Zinfandel. Not poured at the event, but wines that I am also fond of from this producer are their Petit Verdot and Petite Sirah.

Andrew Murray: [Santa Barbara County] It was nice to meet Andrew Murray in person. We had previously only communicated via email and I have previously written about his terrific customer service. Today, my favorite of his lineup was the 2006 Syrah Watch Hill Vineyard.

Shafer [Napa Valley]: I am usually not a big Merlot drinker. Nothing to do with Sideways – I am not much of a Pinot Noir drinker either. But the Shafer Merlot was outstanding!

A really great day and thank you to All Corked Up for allowing me to tag along, as well as to The Henry Wine Group for putting on the event.