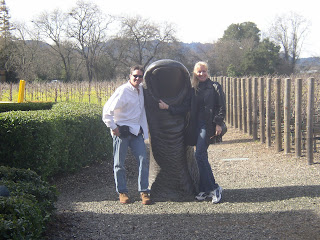 We had planned on opening a 1986 magnum of Robert Mondavi Reserve Cabernet for twenty years.  We had purchased a 1986 Lynch Bages Bordeaux as well; for what wine aficionados suggest just in case the special occasion bottle is bad.  Our guests brought others to have beforehand; hopeful to prepare the palate for the piece de resistance.  We weren’t going to get too cocky about ours being the better wine as we sincerely appreciated their outstanding offerings.
It was our twentieth wedding anniversary but this is a wine column not a love-fest so rest assured this evening was about the wine.  Most couples celebrate the 25 and 50 as the big years.  But, when buying wine, the rule of thumb is a big bottle of domestic or a normal sized bottle of French can go the distance of twenty.  And we had been determined to find this out for a very long time!
We started with an Angeles Crest 2002 Sauvignon Blanc and an Aneas 2002 Chardonnay both from the local Aqua Dulce winery.  They were chilled enough for the early evening leftover heat of the day and paired with the same appetizers we had twenty years ago: Chicken Satay with peanut sauce and Baked Artichoke with Fresh Parmesan dip.
When our wine drinking guests arrived we were quick to move onto the planned festivities.  (Apology to all neighbors, friends and relatives that have known about this plan for two decades and yet not invited:  It’s your own fault for not getting into wines when given the chance, and amply I might add.)
My gift to the husband was a Twomey Merlot and its big sister, a Silver Oaks Cabernet. (Twomey is Silver Oak’s branch that, like their Cabernet only winery, is a Merlot producing winery only.)   I had met the owners of wineetc.com and had personal labels put on each bottle blatantly asking the question in silver foil: “Do I have to wait another 20 years to open these?”
Before we sat down to our gourmet meal we did open a DeLille Cellars Chaleur Estate 2003 Blanc, a Turley 2002 Zinfandel , Pride 2002 Merlot and their 2004 Syrah.  Ed head reluctantly back into the kitchen, while some hovered over him in anticipation, and I put the finishing touches on the table.  Soon the Filet Mignon with Veal Reduction Sauce and Green Pepper Corns was ready.  The roasted garlic and cream cheese laden mashed potatoes had been prepared to a soft swirl and the Spinach Salad with sautéed red onions was chilled over ice.
It was time to un-cork the Mondavi!  We enlisted a friend to oversee the decanting—not trusting our shaking fingers.  We set out two decanters, two strainers and two funnels.  We had not been diligent at all in turning the bottle in its aging process and had only invested in a wine cellar a few years ago.  The cork and the foil had sunken in a bit.  Once removed, with the help of one of those demented looking cork-puller-outers that resemble the uneven bars in gymnastics, we saw that the cork had indeed gotten musty.  Our friend was quick to remind us that was expected.
(After this event I asked Michel, the maitre D of Le Chene, his opinions.  If ever in doubt on whether a cork has tainted a wine follow these simple steps: Add 3 granules of salt for a bad cork smell.  Warm the decanter ahead of time.  Pour an old wine over a candle to see if there is sediment in the neck of the bottle.  Stop pouring if you see sediment.)
It was finally decanted, brought to the table, given it’s proper reverence and…was like butter in it’s smoothness, velvet in the way it bathed out tongues and suffice to say, didn’t need an expensive Bordeaux to back it up.  We were grateful, as were our six long time wine drinking friends, that we could enjoy such a perfect wine.
And after much lingering, and plenty of bottled water, we had to move on.  Friends up the street were celebrating Dave Tanner’s 50th birthday party, rumored to be with Tom Petty, and we wanted to join them.  But not until after we opened a Beringer 1995 Nightingale’s small bottle of dessert wine.  The mini wine glasses went well with a gift of Amy’s Baby Cakes.  Three boxes laden with pink tissue paper nestled three flavors of desserts in little plastic shot glasses.  It was tough to choose between the Toasted Coconut Cream Pie, Key Lime Yum Yums or Amy’s Award Winning Tiramisu.  But, as they were so tiny no one could stop you from having all three.  And then doing it again!

We never made it up the street.  We had to put away the generous gift of a non-vintage champagne for another time.  I can promise you it won’t last 20 more years!  What do you think?  Will we make it?

(FTC disclosure: We purchased our own wine, others listed were anniversary gifts from attending guests.)

VERONA, ITALY (PRWEB) - The CourseJuly 2022 marked an exciting foray into the UK … END_OF_DOCUMENT_TOKEN_TO_BE_REPLACED