Okay, I’m in Boston, I’ve been on the Freedom Trail, had a cannoli from Modern Bakery, even ate dinner in Kennedy’s booth at the oldest restaurant in the US: Union Oyster House.  I want something Irish…now. 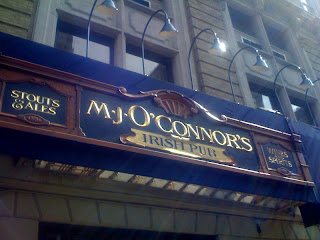 Ed knows that if I have to wait too much longer I’ll be going through the mini fridge at the hotel and he’ll be paying much more than he bargained for.

He led me around the corner from the hotel to the oh-so-convenient MJ O’Connors Irish Pub.  Within five minutes I knew I was in the right place because I could hardly understand our waiter, not for the Boston accent but for his homegrown Irish one.

I told him I wanted to try a few Irish Whiskies.   There were three of us, he suggested three, neat with ice on the side to bring out the flavors.  Like single malt Scotch, our Whiskey flavors would not be diluted by a single ice cube, the flavors would open.

As we chose from their list, we also learned that Irish Whiskey is triple distilled, aged longer than Scotch, and in American Oak.

Jameson 12 year-old: Darkest of all three with a deep honey-ed color, had been aged in a Bourbon cask, and tasted similar to one of my single malt Scotch favorites, Balvenie, that’s aged in Sherry casks.

Paddy: Yellow-colored, like a lowland Scotch, a recent export so will be hard to find, would taste great in an Irish Coffee.

Tullamore Dew: Lightest yellow of them all, with a floral aroma.  Waiter agreed with our perception and suggested we try a Red Breast Irish Whiskey next time.

The short tasting whetted my palate to try more.  But not this time in Boston.  So I lingered over all three and wished I was on one of the Swan Boats in Boston Commons, made famous by Robert McCloskey’s children’s book, Make Way for Ducklings.  Alone.  Save the three Irish that made me linger. 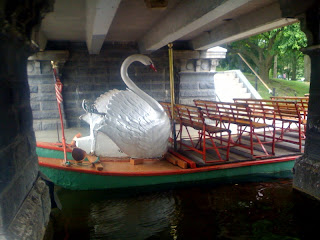 LOVINGSTON, Va./PRNewswire/ -- Virginia Distillery Company and members of the … END_OF_DOCUMENT_TOKEN_TO_BE_REPLACED