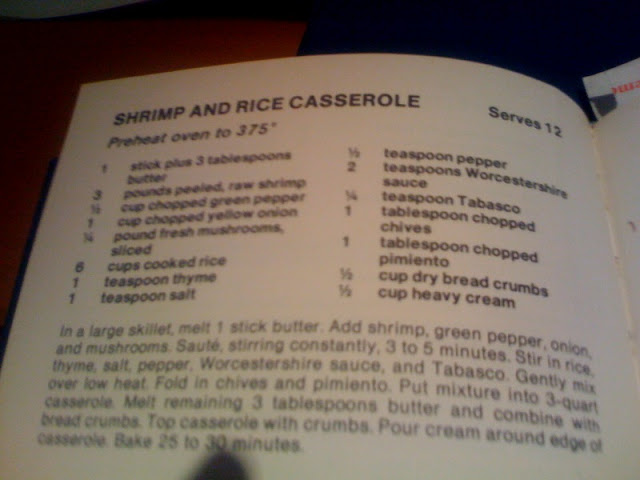 You see that right?  On the upper right hand side of this casserole recipe?  It says, clear as can be, Serves 12.  Now, was I too presumptuous – as all of the other recipes in my Jambalaya cookbook served 4 to 6 – when I went to the supermarket and asked for the 3 pounds of peeled, raw shrimp?  Yes, I was.  And that was only the beginning in this week’s journey for your Chef 101er.

If you read my post on “Supermarket Mishaps” you’ll also know that the fish dude behind the glass counter didn’t correct my faux pas when I queried if 3 lbs was too much for 3 people.  He did, however, snicker at me when I asked if I could get it the way the recipe called for it: Peeled.  “Not here.” And you wondered why I called him a fishy dude…

Once I got home (and at least on this day I didn’t have to return to the market for the one ingredient I invariably leave off) I checked the recipe again.  Not the upper right corner part though.

Then I called Eddie.  He thought it too much.  And, as it sat filling my sink I made a decision no beginner chef should have to make.  I decided, on my own, to freeze half of it without cleaning it first.  I debated, well actually I debated about calling Eddie a second time, and then said screw it.  I knew I wouldn’t be able to clean all 3 pounds without finishing the Kim Crawford Sauvignon Blanc I had opened. 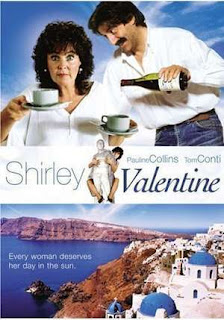 Shirley Valentine always cooked and sipped.  But to be fair, Shirley also sipped after leaving her husband, every day in Greece, through her first affair, and, as pictured above, no where near a kitchen or even thoughts of it.

What in the hell have I gotten myself into?  Shirley moved out of the kitchen and I moved in?

Anyway, the shrimp-full meal was delish.  Even though I only halved the shrimp part and not the butter or cream.  And of course, I did have to open much…more…wine.

VERONA, ITALY (PRWEB) - The CourseJuly 2022 marked an exciting foray into the UK … END_OF_DOCUMENT_TOKEN_TO_BE_REPLACED