While I found the idea of purchasing wine from a kiosk the tackiest thing imaginable, I felt even worse about it after reading the article below.  Can you imagine breathing into a machine to see if you are already too intoxicated to buy wine?  I think the act alone requires you to be intoxicated.  And, egads, what if you happened to use a mouthwash that morning?  Be ready to set off an alarm (and set off on a run) in your neighborhood Ralphs?  That’s only one thing wrong here.  Read on dear wine friends, but you’ve been warned. 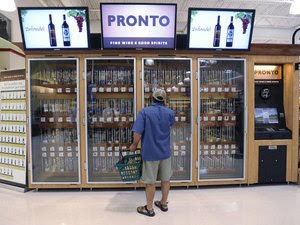 Buying wine in Pennsylvania may get a little easier over the next few months. The Pennsylvania Liquor Control Board is testing two automated wine kiosk machines in an effort to bring wine into the state’s grocery stores for the first time. But the new convenience comes at a cost: two rounds of identity verification and a breath test.

Pennsylvania has some of the strictest liquor laws in the country. Wine and hard alcohol are sold only in state-owned stores, and consumers can buy beer in bulk only from licensed beer distributors.

Nina Yochum was excited and surprised by the tall, glass display case of wine when she walked into a grocery store just outside of Harrisburg in mid-July. This is one of the two kiosks in the state right now, made by the Pennsylvania company Simple Brands. Each kiosk cost about $100,000.

“It just seems like kind of an interesting idea. I mean, you don’t have a big selection, but you do have a selection,” Yochum says.

The machines require customers to go through a couple of tests to confirm they’re at least 21 — and sober. To buy wine, you need to swipe your driver’s license into the machine, and then wait as a state employee sitting in a central office verifies your identity through a remote camera.

“Oh my gosh. I didn’t see that. Oh, that’s really interesting,” Yochum says, after learning about the precaution.

And then, you take a breath test.

Anyone whose breath alcohol content registers over .02 is denied. That’s low enough that if a customer has used mouthwash within the past half-hour, a sign warns them they may not pass.

After buying her bottle of white wine, Yochum decides she won’t be a repeat customer.

“I’ve never gone through so much trouble for a bottle of wine before. I don’t know. I don’t know if this is going to go over or not,” she says. “It’s kind of a hassle.”

Paul Boyer agrees. He cautiously eyes the kiosk while Yochum pries open the door and reaches up to the top shelf to retrieve her bottle.
“Why don’t you just put it out on the shelves like all the other states? We always have to do something a little bizarre,” Boyer says.

Liquor Control Board officials say the kiosks are a way to modernize the state’s wine sales without getting rid of state-owned liquor stores. The two kiosks have each sold about 80 bottles a day since they were introduced in June.

If the Harrisburg area test run goes well, Pennsylvania will begin rolling out the kiosks at grocery stores across the state. By late September, there could be up to 100 machines, each selling 53 varieties of wine at prices ranging from $6 to $20. [Copyright 2010 WITF-FM]

LOVINGSTON, Va./PRNewswire/ -- Virginia Distillery Company and members of the … END_OF_DOCUMENT_TOKEN_TO_BE_REPLACED