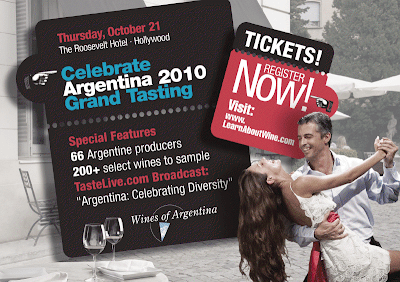 This event produced by LearnAboutWine.com was a triple-score for attendees.  A 30-minute trip (for me) to see the newly re-done Roosevelt Hotel in Hollywood, a one hour wine class and tasting, and then to round out the day no less that 65 wine producers from Argentina sharing their passion, and their wine.

Our class was led by Nora Z. Favelukes, President of QW Experts.  And even though we were to try 4 wines from the 2010 Argentina Wine Awards Competition held in Mendoza last February, we opted to listen, attentively, to our speaker to learn such things as:

Argentina is both blessed and challenged by altitude, the continental divide, terroir extension/diversity, low fertility of soils and dry climate.

Ms. Favelukes explained that the low fertility allowed for complexity, and the climate – namely in Mendoza – made it easy to produce organic wine.

She made several references to the similarity between California and Argentina…that it was the Italians that came to both countries that helped develop the industries in each.

We learned that Argentina is the 5th to 6th largest producer of wine in the world, and it’s 4th largest consumer.  Since 2000 several French families from Bordeaux purchased Argentinian land to grow grapes as they were attracted to the inexpensive land and its quality potential.

She pulled up maps several times in her presentation to explain the different regions, but I had all that WSET stuff floating around in my blond brain (My test was 10/24, so I will know soon how I did!) and there wasn’t room for any more!

The 4 Award Winners (My notes in italics)

Color was a bright strawberry, and the aroma was the same bright fruit, mild acidity and short finish.  With 100% Malbec I was hoping for more. 85 Eve pts.

Bonarda is their Charbono grape and I really wanted to like it, this example was 100% Bonarda.  The color was garnet/ruby with aromas of deep toasted oak, cigar, mint and black fruit, the taste had medium tannins, smoke, dry.  I’d like to have tried it in a full glass, another time.  So I’m between 88-90 Eve pts.

The color was a nice purple, aroma of toasted oak again but this time – WOW – the violet notes were just bursting!  Remarkable!  The taste was very dry with high tannins and not much fruit.  All in all, such a pleasure to try, I’d have to say 90 Eve pts.

Another dark ruby to purple color, I got a very vegetal nose right off of mushroom, black pepper.  The taste was medium on the tannins, medium mouthfeel, high acidity and black fruit.  It was a blend of 70% Malbec and 30% Cabernet Sauvignon.  Not sure about this one yet…about 86 Eve pts.

The Wines  (I’ve used italics for the ones I liked, but don’t judge the rest by me, most I just couldn’t get to in the 138 page booklet.)

A Word About the Water!

Lauquen reserve water was mistaken, by me, to be Vodka on sight.  I didn’t need Vodka, I needed water, and this one was outstanding.  They provided both with and without gas bottles to guests and I thoroughly enjoyed chatting with their reps, sobering up with their water, before leaving Argentina behind…