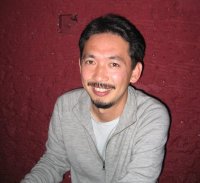 As fringe members of the food and wine cognoscenti of the SCV, Don and I remain alert to opportunities to learn more about these two topics of interest.  (Of course, this is one of the many reasons why we like to hang out with Eve!)  That said, we were enticed by the e-mail last month inviting us to a sake tasting at Sushiya Bar & Grill in Valencia.  On the evening of May 25th, guest sake sommelier Yoshi Murakami would be on hand to share his sake savvy and pour 4 samples of artisan, micro-brews for only $10.

Admittedly, until rather recently, we were convinced that we did not like sake–our negative perception stemming from our previous exposure to the beverage served only hot. The epiphany came a couple of years ago when we attended a sake tasting at Yaki Kui Restaurant in Canyon Country. It was a terrific tasting at which at least 2 dozen sakes, served both hot and chilled, were expertly paired with Japanese and Asian-fusion dishes.   At that time, we discovered that sake served chilled is delightfully different (from the hot beverage) and really quite wonderful!  The only problem with the experience is that we were presented with too much, too soon; that is, more sake than we could reasonably analyze, along with an overload of information.  But we did come away with a fresh attitude about sake and a desire to order it in restaurants.

Then, just which sake to order became the new challenge.  It so happened that my favorite sake at the Yaki Kui tasting came in a pretty blue bottle.  The restaurant owner was even kind enough to allow me to take the empty bottle home with me.  It was labeled Junmai Ginjo, but I had no idea what that meant.  In any event, my strategy for selecting chilled sake was to consider the mid-priced sakes on the list and to ask the server if any of them came in a pretty blue bottle!  On occasion, the strategy served me well, as in the excellent sake at Kabuki in Valencia–the blue bottle and sake glasses served atop a bed of crushed ice and presented in a lacquered wooden box.  Then again, my blue-container strategy has sometimes led to disappointment, as in Trader Joe’s Sparkling Sake. 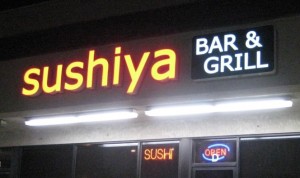 Now, skip to the present and Yoshi’s sake tasting at Sushiya.  He distributed a helpful hand-out and reviewed the basics of sake with the patrons.  Then he came to individual tables to pour samples and engage in one-on-one conversations about each sake.  And we came away informed and enlightened and in possession of new-and-improved strategies for selecting sake.  Here’s what we learned: 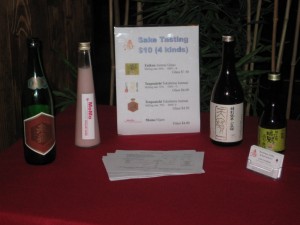 Yoshi poured Zuikan, Tenpouichi, and Oigame (polishing rates of 60%, 55%, and 70% respectively; SMV of +8, +5, and +7, respectively).  He also poured Momo, a sweeter, unfiltered sake.  They were all light and fragrant and paired well with the complimentary salmon carpaccio and the ahi poke appetizer we ordered.  We do look forward to more meals at Sushiya and more tastings with Yoshi.

Update:  On my last trip to Trader Joe’s, I brought home a bottle of Trader Joe-san’s Selected Sake from Japan.  The label indicated that it was a Junmai Ginjo sake, with a polishing rate of 45%, an alcohol content of 14-15%, and an SMV of  +3 (medium dry).  It was actually quite good.  The fact that it came in a pretty blue bottle was just an added bonus!