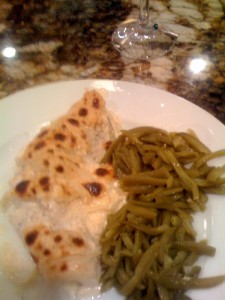 The Official Cookbook of the 1984 Louisiana World Exposition

Published by the Junior League of New Orleans, Inc.

This cookbook, a family favorite that I’ve quoted several times on this website, has yet to fail us.  Eddie said that the topping would be reminiscent of baked muscles, he was right.  And, even though I chose to make fish for “lighter fare”, this dish, as always is the case with the recipes in the book, proved that great tasting meals require substance.  At least we weren’t hungry an hour later!

An added plus, I had all of the ingredients, save the fish and the onion, in my house already!  LOVE THAT.

We served it with boring French cut green beans (from a can!) that we mixed the sauce and onions into with each bite, and the 07 Ghost Pines Chardonnay I’d reviewed once before on this site:

Salt and Pepper to taste

In a shallow baking dish, salt and pepper fish liberally; cover with sliced onion; dot with butter.  Bake 20 minutes or until fish flakes easily.  In a small bowl, mix mayonnaise, mustard, and vermouth.  Pour over fish and broil 2 to 3 minutes, until brown and bubbly. 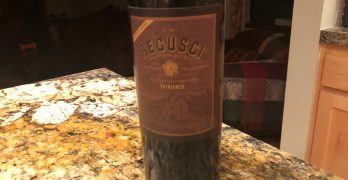