Marco Pierre White is one of my gastronomic heroes. I was first introduced to him on the NBC television series Chopping Block a couple of years ago. Now you can see him on the Knorr Stock Pot commercial. But neither do him justice. Eileen Wright’s article about his restaurant does… 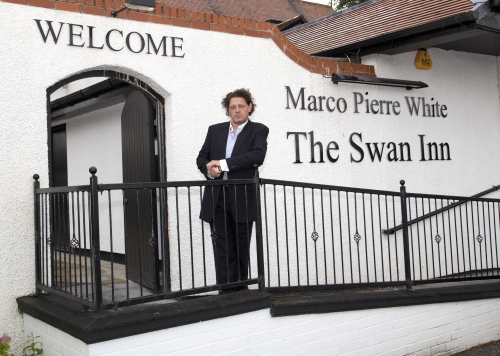 Today was a day that had been set aside since the moment I arrived in England.  This day was reserved for my extensive dining experience at Marco Pierre White’s The Swan Inn.
buy albuterol online

First, an introductory to Marco Pierre White; Marco was the youngest (and first British) chef to receive three Michelin Stars.  White is known as the “Godfather of Modern Cooking” and is considered the first celebrity chef in England.  On his way up the ranks he worked alongside Mario Batali, as well as mentoring many new and upcoming chefs such as Gordon Ramsey.

He made a television appearance as head chef in the first airing of Hell’s Kitchen in 2007 starring Gordon Ramsey.  Today, I am ecstatic to dine and experience the cuisine of Marco Pierre White’s gastronomy.

The following five courses had me rolling out of the restaurant after finishing a very enchanting feast.J.

First up, White Onion Veloute: this amazing creamy onion soup was magnificent; a velvety creamy texture with the flavors of sweet onions and thyme were a match made in heaven.

Next, Salmon Rillette with Horseradish Cream and Pickled Cucumber: this dish was served in a timbale and had the consistency of pate. When I hear horseradish I think of a hot and peppery essence but this was not the case.  The dish was so mild that I could not determine there was any hint of the mustard relative.  Instead the mix of steamed salmon, horseradish sauce and pickled cucumber was perfectly composed.

Following, Bresaola and Buffalo Mozzarella: Bresaola is salted and air dried for two to three months in house. The buffalo mozzarella is produced within the restaurant walls as well.  The combination of the sweet, salty, musty Carpaccio style beef combined with the creamy panna cotta texture of the cheese and lemony tang addition of the micro greens made an exquisite combination.

The main Course came just as I soaked up the last of the sauces with the fresh roll just begging to be consumed.

Pan Fried Sea Bass, New Potatoes, Wilted Spinach, Chive Veloute:  The mélange of the crispy bass skin, softness of the steamed potato along with, the mild oniony chive sauce, and spiciness of the spinach was beautiful harmony.

I only have room for one more dish; Breast of Goosnargh Chicken, Smoked Mash, Saute Mushrooms, Red Wine Sauce:  Goosnargh is a village near the town of Preston which is where I am currently staying. The Swan Inn gathers all their ingredients fresh from the village.  The chicken was fork tender with a beautiful silky red wine sauce with the umami flavors infused from the wild mushrooms. The smoked mashed potatoes rounded out the astounding compilation of flavors.

The suggested wine for the feast was a Colombard Sauvignon Blanc from France; the characteristics of the wine balanced perfectly with the ingredients of the courses; a soft texture, aromas of passion fruit and green apple followed by a dry fresh finish; splendid!