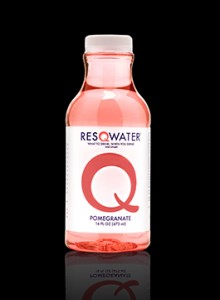 What defines a hangover? Is it just feeling a little crummy after a late night that included good wine, good food and good times with friends? What I call feeling a little Worse For Wear [WFW]? Or is it the severe symptoms that one associates with drinking way more than you should? I’ve always associated the term with the latter definition, which would mean hangovers would never happen to Eve Wine 101 readers. But, if we assume for our purposes that the former definition also applies, then you might find this article interesting.

I read about purported hangover cure ResQwater [www.resqwater.com] in The Tasting Panel magazine, a well respected trade journal.  I assume most Eve Wine 101 readers do not have access to this publication, so I decided to follow up directly with ResQwater CEO Steve Earnhart. As ResQwater is based in Arizona, a face-to-face meeting wasn’t feasible, but a telephone conversation was.

Steve said that he and his business partner, company President David Schuman, developed ResQwater as a “labor of love”. While Steve is a fairly big guy, he says his petite wife develops hangover symptoms after only consuming two glasses of wine.

Steve had previously heard of the drug “antabuse” which is used to treat alcoholism by causing severe unpleasant symptoms when consumed with alcohol. Steve reasoned that there should be a way to do exactly the opposite, i.e. process the alcohol out of the body to reduce unpleasant symptoms.

You can read the technical information on the company’s website, but I decided to give ResQwater a shot, again taking into account that I was trying to combat the above mentioned WFW feelings, not a full-hangover [which I don’t think I’ve experienced since college].

ResQwater is supposed to be available at BevMo, so I stopped into our local store a few weeks ago to buy some. Unfortunately, I couldn’t find it on the shelves and the store clerk had not heard of it. I let CEO Steve know and he said he would follow up with his distributor, but in the meantime would send me a sample of the product. Well, a few weeks went by and the sample never showed up.

Figuring it was a USPS issue and not wanting to be piggish over a tiny cost, I dropped by BevMo to see if they now carried ResQwater.  Good news – it is now on the shelves. I purchased 4 bottles – 2 pomegranate flavor and 2 lemon-lime flavor.

We recently had dinner [which included wine] with our good friends Mike Ortiz and Carey Babcock. As the evening wound down, I figured it was time for the “great experiment” and opened the two bottles of the pomegranate flavor. We all tasted the ResQwater, and, to be honest, we found the smell and taste a little off-putting. Not bad, just not entirely appealing. [Carey said it tasted like “Kool-Aid with vitamins.”] CEO Steve had warned me that this isn’t “yummy water” like certain beverages. I expect it would have benefited from being colder than the temperature I was serving it at.  [CEO Steve confirmed this, saying: “it’s best cold – no different than every other non-alc brand in the US. You’d never think of drinking a warm Coke…”] Two of us elected to drink the ResQwater, and two of us did not.

We compared notes a couple of days later. The two who drank the ResQwater both reported that they actually felt good the next morning, while the two who didn’t experienced those WFW feelings. Can I say for sure this was only the effects of the ResQwater? No, I can’t. This was definitely not a scientific experiment. But, the results would at least not rule out the benefits and definitely encourage further use of the product on my part.

CEO Steve wanted me to point out that ResQwater is not intended to encourage excessive drinking [and neither do I] and to remind people that drinking ResQwater doesn’t mean it is okay to drink and drive. As he put it “A bulletproof vest can’t stop a bus”. But, Steve says drinking it as the last drink of the evening or even the next day when already feeling bad, it will help to alleviate the negative after-effects of alcohol.

If anyone else has tried this product, I’d love your feedback.

[By the way, in the interest of full disclosure, when CEO Steve heard I hadn’t received the samples, he sent me replacements. Thanks Steve!]

The KFWE is the destination for wine and food lovers alike, affording … END_OF_DOCUMENT_TOKEN_TO_BE_REPLACED