Appetites’ Easy as Pie is based on Clear-Media’s award-winning cooking platform, one of the only cooking apps to be named iPad App of the Week by Apple, Inc. Unlike traditional text or photography-based cookbooks, Appetites’ Easy as Pie uses bite-sized, first-person videos to teach chefs of all ages the steps to creating both unique and classic pie recipes. Users simply swipe to advance to each new step of the recipe. Evan Kleiman also shares her helpful hints and secrets on preparing foolproof homemade doughs, toppings and decorative flourishes.

“Making pies can seem intimidating, so we wanted to bring the successful educational and entertaining platform we built for Appetites to teach users how to make Evan’s amazing pies,” said Nick Alt, CEO of Clear-Media and Creator of Appetites.  “We are very excited to partner with Evan! She makes it so simple.”

“It’s no secret that I love pie, and what better time of year to express that love than the holidays?”   said Evan Kleiman. “This collaboration with Clear-Media is unique in that Appetites’ Easy as Pie” breaks down each step of the recipe into a short video clip from my own point of view in the kitchen.  No guesswork and no fear.  Just cook along with me to make delicious pies!”

Appetites’ Easy as Pie is now available on App Store for iPad, iPhone and iPod touch or at www.itunes.com/appstore.  The app offers 20 original pies, 5 different pie crust options and 5 toppings all detailed in nearly 5 hours of video content. 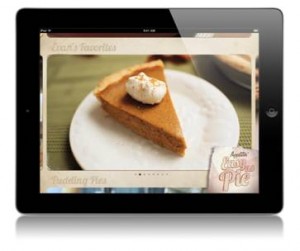 About Appetites’
Appetites is the award winning step-by-step video cookbook app created by Nick Alt and his company Clear-Media, an award winning video strategy and digital communications company based in Los Angeles and New York City.

About Evan Kleiman:
Evan Kleiman is owner and executive chef of one of LA’s favorite restaurants, Angeli Caffe, best-selling author of numerous cookbooks including “Cucina Fresca” and “Pasta Fresca,” host of Good Food on KCRW and beloved local food personality.

BLADNOCH, SCOTLAND sing - In celebration of its 200 year anniversary in 2017, … END_OF_DOCUMENT_TOKEN_TO_BE_REPLACED