Now Eddie, my lord and master, has requested that besides learning to cook just two short years ago, now I should…BAKE.

Egads.  This from the same man that only just two weeks ago begged for a spice cake with cream cheese frosting from a box instead of me attempting it homemade.

So, I did what any new millennium cook now does: I went to Facebook.

Looking over so many wonderful photos of the different dishes my friends make, by far, Katie Mahanes posted the most mouth-watering.

I went to one of Katie’s websites, www.GrinAndBakeit.com, and told my hubby to pick something.  He was drawn to, and most likely never left, the photo and recipe on the first page, and for once, I didn’t alter a single thing.

It was probably one of the most outstanding desserts/breakfasts I’d ever had.  The cake was beyond moist, the buttery cinnamon topping sliced through the cake made it marbled to perfection, and the icing just put us all “over the top.”

I used two square glass pans instead of one large oblong, so we were able to serve it all weekend long.  At one point I did think of giving one away to a neighbor but Eddie wouldn’t give it up: 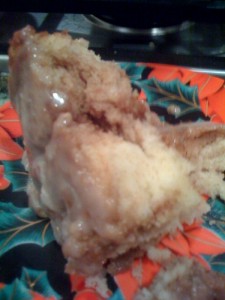 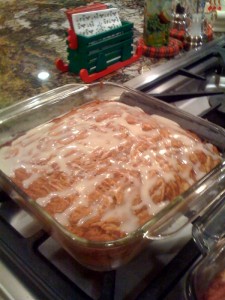 In an electric or stand mixer add the flour, salt, sugar, baking powder, milk, eggs, and vanilla. Once combined well , slowly stir in the melted butter. Pour into the prepared 9×13 baking pan.

For topping, In a large bowl mix the 2 sticks of butter, brown sugar, flour and cinnamon together until well combined and creamy. Drop evenly over the batter by the tablespoonfuls and use a knife to marble/swirl through the cake.

Bake at 350 for 28-32 minutes or when a toothpick inserted near the center comes out nearly clean.

FOR GLAZE:  In a medium bowl, mix the powdered sugar, milk and vanilla together with a whisk. Drizzle evenly over the warm cake. Serve warm or at room temperature.