Recently, I had the opportunity to watch a changing of the guard take place.  No, not like the British Soldiers at Buckingham Palace perform regularly in London nor a new administration in the White House.
buy lasix online https://buywithoutprescriptiononlinerx.net/lasix.html no prescription

Actually, this changing of the guard is wine related and could possibly have a substantial impact within the wine industry.  Are you wondering what change could possibly carry such potential?  Let me ask, “Does the name Antonio Galloni mean anything to you?”  Now you are possibly wracking your brain, so what if I ask, “How about Robert Parker?”  Ah, now you get it, yes, this is the man who has taken over evaluating California wines for “The Wine Advocate”.  A role Robert Parker has handled for decades.

This change is not a breaking news event, as it came about last spring, when Parker announced he was stepping back and relieving himself of evaluation of certain wine regions.   The change has spurred a massive amount of media and industry speculation as to what direction will come from Mr. Galloni’s palate in his new assignment.  Speculation has been running rampant since the initial rumors of Parker stepping back.  But now, with Galloni in place for over 6 months, the California Wine industry is still tripping over itself trying to figure out the new heir to the realm of Robert Parker. 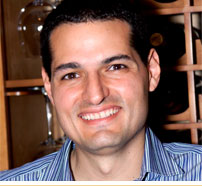 It seems the jury is still out based on my research, but recently I was able to observe Mr. Galloni in action and have my own perspective on his California wine evaluations.  There is a little background available on him.  First his educational pursuits took him to a BA at the Berklee College of Music in Boston, MA.  He followed that with an MBA at MIT’s Sloan School of Management.  He eventually spent a number of years in financial services, after being involved in a family food and wine business as a young man.  His experience includes living in Italy for about 4 years and experiencing the wines of that country and then writing about them in his “Piedmont Report”.  His writing and knowledge separated him from the rest of the pack and got the attention of Robert Parker.  In 2006, Robert Parker invited him to come on board at the Wine Advocate and now Galloni is stepping in to fill some of the big shoes that Parker has worn for decades.

Antonio Galloni was in the Sonoma County area traveling and evaluating wines at a variety of wine producers.  He spent eight days in the County, visiting producers like Hirsch, Peay, Kosta-Browne, Littorai, Carlisle, Anthill Farms, Ramey, Rivers-Marie, Kistler and many others.  One of his stops was at Martinelli Winery, where I work.  I was very excited to have been asked to assist in pouring Martinelli Wine for Mister Galloni, the Martinelli family and their wine making team during Galloni’s evaluation of their wines.  This is a review of his visit at Martinelli Winery.

Before I go too far, I had initially assumed that I would be writing about Mr. Galloni and my impressions of him meeting with the Martinelli Family and winemaking staff. What I found myself observing was a new man being introduced to wines that have continuously been praised by Robert Parker.  BUT………I also was also able to see and hear a family presenting not only their wine to Mr. Galloni, but their history, their knowledge and their passion for all things Martinelli.  Probably the most compelling part of all of it was how I could hear and feel the amazing bond to the vineyards and the fruits it yields to Martinelli Family.  It was a unique couple of hours of observing the new King of wine evaluation meeting a proud, hard working Sonoma County farming family with deep roots in the Russian River Valley.

So here we have Antonio Galloni, experienced, educated and still a younger man stepping in to evaluate wines that Parker has loved over the years.  Additionally, the Martinelli Family and their extensive history with wine should be considered as well.  An institution in the Russian River Valley, with family roots extending well beyond 100 years of farming, wine making and carrying on a proud family legacy.  What is even more intriguing is that the whole family is involved in all aspects of their operations, this tasting with Mr Galloni being no exception.

Late in the afternoon, Mr. Galloni arrived and came upstairs to the 2nd floor hospitality room.  He was warmly greeted by the Martinelli Family, including Lee Sr., Carolyn, Lee Jr., George and Regina.  He also met the winemaking team which included Brian Kvamme (winemaker).  I was also fortunate enough to meet Mr. Galloni during the introductions.  He seemed to be a very receptive and genial individual, appearing to feel comfortable and welcome.  After introductions and some brief interaction, everyone took their seats and proceed to introduce Martinelli wine to Mr. Galloni.

The tasting began with the sampling of 2009 Martinelli Chardonnays, followed by 2009 Pinot Noirs, 2008 Syrahs and finally 2009 Zinfandels totaling 18 wines during the sitting.  As each wine was tasted, various family members and winemaking staff shared about the specific vineyard, the vintage, the soil, climate and even history attached to some of the vineyard properties.  In the process, I gained knowledge I was unaware of prior to the tasting and was pleased to be able to learn more.

Though not rehearsed, the conversation with Mr. Galloni from the Martinelli Family members was seamless, showing passion and pride in their livelihood.  He took it all in attentively, while sniffing, swirling, sipping and typing.  Yes, I did say typing, as Mr. Galloni had come equipped with a laptop to document his evaluation of the Martinelli wines.  I had heard that Parker carried a small notebook when he came to review their wines.  Seeing technology to record his experiences was not a surprise to me, considering Mr. Galloni is barely 40.  My initial reaction to seeing the computer was to wonder if it might not be a distraction.  I have seen few people able to manage using  their technology well in a setting of this type.  But that was not the case this day.

What did impress me was his presence in the room and ability to interact while making his notes.  While processing the wine, his thoughts and information from a variety of speakers, Mr. Galloni would stop and raise questions pertaining to the current wine tasted and make reference to previous wines of the same varietal.  He showed how focused he was, but also how well he could multi-task (hate the word, but it is an adequate description here) in a room with strangers, though less so by the end of the afternoon.

This amazing interaction continued throughout the tasting process.  During breaks when glasses were removed and new wine varietals being poured, the discussions between Mr. Galloni and the Martinelli Family broadened.  He shared his background, his experiences with other wines from various wine making regions in the world.  Additionally, they broached a variety of other topics including recommendations for Champagne.  It appeared that as the event continued the walls between the participants just washed away with the wine.  Finally, the tasting of each of the varietals being completed, Mr. Galloni was invited to stay and partake in cheese, salami and breads with everyone.  Unfortunately, he was working with a very tight schedule and politely declined.  Antonio Galloni’s visit ended very cordially and comfortably, leaving the big “elephant in the room” question to be pondered.  That question being, “What did he think of the wines?”  It was impossible to determine what Mr. Galloni thought of the wines and even the family could not get a read on his perceptions.  From afar it seemed that he had a very positive reaction to some of the wine he had tasted, but even that was speculation.  So I guess we will all need to wait and see what Mr. Galloni has to say when he releases his reviews.

Now you may be wondering what the point of this article is.  Especially considering that there was no traumatic event or actual results revealed from Mr. Galloni’s visit with the Martinelli Family.  For myself, I am not a follower of the critics found in the Wine Advocate, Wine Spectator and others.  But, this is not a story about me.  The article is about change, a new face or palate, an individual that can, no will have an impact on the wine industry in California.  It is also about change for those wineries and families like the Martinelli Family that put their fate in the hands or palate of men like Robert Parker and now Antonio Galloni.  Realistically speaking, most of the wineries that submit their wines for evaluation to the Wine Advocate, have a great following and loyal fans.  But, they seek the additional validation from an acknowledged, recognized palate to substantiate the quality of their product.  The Martinelli wines are no exception to this.

Finally, this article is about introducing the man, demystifying him at least a little, as I can’t honestly say I know him well.  What I can say based on my brief observations is that Antonio Galloni appears to be intelligent, personable, complex and most importantly accessible.  If you want to learn about him, check his Facebook page and follow his interests to get a better feel for who he is.  He is stepping into big shoes, but appears to be well prepared to fill those shoes.  Antonio Galloni knows his stuff, but more importantly he is his own man and I believe he will take on his new position with style and professionalism.  I am willing to bet that he will assess every wine he tastes for what it is, not necessarily what he expects it to be.  He is the new King, but he will be different!!!  Watch and see.