(Editor’s note: This article is not written by me, nor are the questions mine.  It came via e-mail on DiMaggio’s behalf.)

It’s been more than 60 days since The Cellar Wine Bar and Restaurant closed their doors.  Like any business that goes through this difficult decision and process, there are many questions left unanswered and issues that need to be brought to closure.

I chose to post a few comments and updates at the time of our closing and most specific to our wine club members. I purposely kept things very general and gave as little detail as possible. Unfortunately, my professional decision, and what I thought to be a courtesy, was not met with the same respect of those involved. I continue to receive all types of communications in regards to things said, questions or more importantly issues where people are being misinformed.

With that in mind, I’ve decided to answer the questions, speak out and let some things be known. I’m not approaching this with the intent to create a forum nor a mud-slinging session. I’m merely looking to share that which remained behind the scenes and to shed some light on a lot of misinformation being passed along.

Some of the ongoing questions received and my responses:

So how is/was it having “them” as landlords?

Taking over from All Corked Up (ACU) immediately followed with a series of broken commitments and misgivings from the landlords.  The hope was to let the issues go and chalk this up as lessons learned.

It was originally agreed that the executive wine lockers were to be owned and operated by The Cellar. Like many other things, that agreement was rescinded almost immediately upon taking ownership. We never owned or operated ANY of the wine lockers, executive or otherwise, during our 16 months in business.  ALL wine lockers were owned and operated by the landlords.  We never collected rental money for any of the lockers nor did we have access to the content of any lockers. The only access we had was to assist someone into the area where their locker resided.  Hence, the comments that we “walked away” with anyone’s wine is absolutely not true.  The only people who had access to the lockers were the landlords and those that owned (paid rent) for the lockers.

Why am I receiving these emails from ACU regarding another wine bar and their wine club?

How did this “other location” end out with my information? No one gave ACU permission to sell my personal information (to include email, address, phone and credit card information)?

We continued to address this question by referring concerned customers to contact either ACU or the  purchasing competitor.

(Around May/June time frame) Why/When are you closing?

From the emails I’ve been receiving I thought you were closing or had been bought … or are you going to be the second location for the competitor that was announced in their emails?

Starting around the end of May or early June time frame The Cellar began having to explain that we were NOT closing.  That ACU had sold the wine club/database to a competitor and had been very actively endorsing that company and encouraging all customers to attend and support that business.  In those same emails as mentioned above, they also announced that they were closing ACU. The email was presented in such a way as to infer that “everything” was closing.  ACU had continued, from day one, to create a connection of ACU and The Cellar.  Up until the day we closed the doors, they still referred to The Cellar as ACU in any and all conversations; both professional and personal.  Hence, when the email blasts went out to all who communicated with them, interacted, read the emails, owned lockers, etc., it read as if “everything” was being closed down.  At this point we experienced a significant decline in business and spent the next several months trying to “undo” the damage.

Why would they do this?

Our answer is only speculative, but all that we can come up with since our rent was paid 3 months in advance at that point and we continued to pay utilities in advance, per their billing; which yes, we know is not legal, but again we attempted to keep the peace.   Our answer is simple and fitting to their previous and ongoing business and personal practices; they like to maintain control and were truly only looking for a “front person” to run things. They wanted to create something along the lines of “The Cellar at ACU” or an illusion of such.  Wanting someone else to incur the headache of employee issues, “clean house” and dig it out from what it had become, a heavy financial burden. Any time a step was taken to create autonomy (i.e., street signage, move/remove ACU signage by the front door, separate entrance to wine lockers, own and operate executive wine lockers that remained in The Cellar room, separate bathrooms from ACU retail and wine locker area and plenty more) it was met with a resounding “no!”

Why did you close so abruptly?

The overall behavior of the landlord provoked an immediate closure of The Cellar.  We were packed and out of the space in less than 36 hours and left behind food and other supplies, materials and equipment that we were unable to take due to storage and logistics.  What became obvious was that ACU wanted to remain in the light and have The Cellar operate under ACU as The Cellar at All Corked Up.

Is there another restaurant moving into the space?

We are not aware of what’s happening with the space but would not be surprised if the next business actually operates under the unfortunate paradigm they were trying so hard to create. 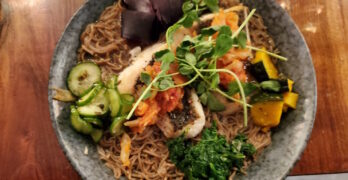 The term “embarrassment of riches” is often overused, but it is hard to come up … END_OF_DOCUMENT_TOKEN_TO_BE_REPLACED