There was no way out of it.  I wanted my Holiday Home Tour tickets.  It was coming up soon, December 2, and I was afraid it might sell out.  I wanted them as soon as I realized it would be the only way I was ever going to see the inside of some of my neighbor’s homes.  I could almost smell the pine garland, almost see the festive lace & ribbon bows and try to touch whatever was arm’s reach beyond the velvet ropes I imagined would attempt to press me back.  I convinced Eddie, Dr Kim and new co-worker Grace that this was something we had to see.  They agreed and off I went merrily along to purchase the tickets.

I was at Valencia Pharmacy to pick up yet another new prescription for my blasted headaches when I noticed Margo’s boutique next door.  I’d walked past it many a time, afraid to go inside and never had the excuse that I had to.  But I knew I had to go inside for the tickets, you couldn’t order by phone, but I was nervous.  It could have been because the designer dress in the window—you know the one with the tiny pink rosebuds covering the bodice—had been calling to me.  It could have been that the music wafting from false rocks around the entrance reminded me too much of a fantasy.  It could have been because I was afraid I wouldn’t be able to afford anything besides the tickets and they knew it.  But most likely it was because I was wearing Eddie’s grungy sweats from the fire academy with only the fired dept logo for an accessory.  My hair was sweaty from spin class, my feet slipped casually in my $10 Payless clogs and my skin wiped free of any makeup remains.  I hoped to slip in and out unnoticed.

It wasn’t the case.  Margo herself greeted me.  She put me quickly at ease by casually showing me around her store and when I lingered over a pretty display, proceeded to offer me a more detailed tour as well of it as well as the other unique shops within it.  It was as if time had stopped and all I had to do was been led around this wonderland.  Margo showed me the back room where they offer their clientele champagne, cappuccino, coffee and hot chocolate.  There was another sitting room with a television that could be used for a child’s video or a husband’s look at CNN.

She introduced me to her hairdresser brother Udo who housed his salon within Margo’s.  One of Udo’s clients told me she had been seeing him, even though she lived over the hill, for over twenty years.  They also had a manicurist that had some new nail lacquer that promised to replace porcelain nails.  The same customer held her hands up alongside Margo’s to show me the amazing lengths they had reached with this new polish.  At this point I wished I were doing a formal interview as I thought I would NEVER remember everything Margo had shown me.

I got a tour of Dahbe next.  This is not just a makeup studio.  It was stocking stuffer shopping heaven!  Every little nook and cranny had been filled with different color-coordinated displays of candles, makeup brushes, perfumes and spa items.  My favorite was antique looking crystal-type bottles with silver lids that sprinkled four different types of powder through pepper-holed tops.  Some had what appeared to be hand paintings on the outside while others held just the mintiest of green bath balls.  I made a mental note to stop by again at least for that.  Then Margo showed me the latest addition: a room for custom fragrance blending!  My mind and senses completely assaulted; I reluctantly dragged myself away.

One final round of the main store before I exited and Margo showed me teeny bubble blouses that could fit Udo as well as a tiny shopping bag artfully decorated.  Long jacketed pant suits, wedding dresses and suede blouses became a blur for me.  Each staff member rose from her desk to outstretch a hand to me in greeting.  If I couldn’t get through a normal retail store how would I ever survive touring four houses that promised equal, if not more, excitement?

In the long run what impressed me most was Margo and her staff.  The extras, the overwhelmingly beautiful stock of items, were just an additional treat.  Margo treated me like I had entered her store wearing that rosebud dress, smelling of rosebuds, dusted in a rosebud glow.  And even if she swears that it doesn’t matter what you wear in her store I know she honestly sees her customers that way.  And her graceful attitude puts them immediately at ease.

No how can I convince Ed to go to the Bootlegger’s Ball and use my “Get Acquainted” coupon for $25 off for my rosebud dress?  If I promise to wear it a la Minnie Pearl with Margo’s tags showing?  To the Holiday Home Tour? 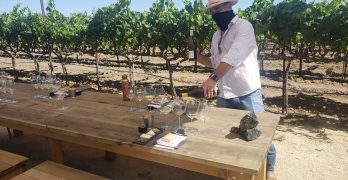