Sutter Home Family Vineyards today announced the 2012 kick-off of the 21st annual Build a Better Burger Recipe contest and cook-off.   The contest is now officially open for recipe submissions, closing September 3, 2012. Finalists will compete for the $100,000 grand prize for the winning all-beef burger, and a $15,000 prize for the winning alternative burger.  Finalists will be announced the second week of January, 2013 and the cook-off will take place in California’s wine country on May 18, 2013. 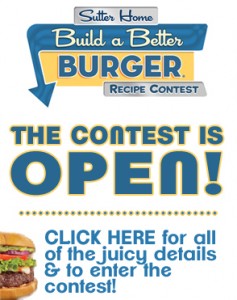 “This competition started 21 years ago as a way to demystify the wine experience by pairing America’s favorite everyday meal with its favorite wine brand – Sutter Home.  Everyone has a chance to win, so we encourage casual cooks of all levels to submit their recipes,” noted Wendy Nyberg, Marketing Director for Sutter Home Winery. “Over the years our winners have hailed from different careers, geographic locations, and heritages – all of which have influenced their burger recipes.”

The winning burgers will be selected by notable chefs and culinary experts. Past judges have included such icons as Iron Chef Cat Cora, Chef/Restaurant owner Thomas Keller, and Celebrity Chef and Restaurateur Art Smith. The judges for the 2012 contest will be announced with the finalists in January 2013.  Burgers will be judged on originality, creativity and taste.

Entrants can visit www.buildabetterburger.com to review past winners, judges, and recipes. The website also includes guidelines for creating winning recipes and suggestions for pairing wine with burgers.   This year the contest has been expanded to include a social media element.  According to Megan Steffen, Social Media Marketing Manager, “We encourage everyone to enter the Build a Better Burger contest via Facebook. For those who prefer reservations over grilling, we will have other fun and engaging social media promotions such as burger-related sweepstakes and contests throughout the summer burger season.”

Tracey Altman, Vice President of Marketing for Wholly Guacamole, a sponsor of the 2012 competition, commented, “Being involved with a legacy program such as Build a Better Burger is an exciting opportunity for our brand. Wholly Guacamole is known as a dip, but we are also a great condiment, ingredient and snack.”

“True connoisseurs know the buns are just as important as the meat and fixings for a truly great hamburger,” said Julie Abraham, Director of Consumer Marketing for King’s Hawaiian, who is participating as a Build a Better Burger sponsor for the second year. “We are anticipating some great recipes to share with consumers and hope that everyone will be inspired to look for our New Original Hawaiian Sweet Hamburger Buns in the deli or bakery section of their store and build their own better burger with “aloha” in every bite!”

Full rules and details for the contest can be found on the website www.buildabetterburger.com, which will be updated regularly during the contest.