Medea and I made our way up Tbilisi’s Abashidze Street . As usual when I am with Medea, we are running late. Tonight we are dining with two longtime clients from Tokyo, Fumio and Kenji. 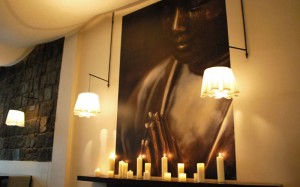 At length, we arrived at our destination. To my surprise, our guests had not yet arrived. The Sakura Restaurant is the best place in Tbilisi for business meetings, sushi, and sake. The food is delicious, prepared in the traditional Japanese style, and the ambiance most pleasant. The Sakura’s decor is expressive of the elegant simplicity that is Japan.

As our guests were escorted to out table, and after the customary pleasantries and a multitude of bows, we took our seats. Motioning for our waiter, I was quick to order sake and ask to see our chef.

Chef Giorgi Chincharashvili and I have developed a close relationship over the years. With each trip to Tbilisi, I have shared his table many a time. Quite the charmer, Giorgi welcomed our guests and made them feel comfortable.

“Grigol,” Giorgi paused to contemplate the moment. “Shall we go fusion or stay traditional?”

Knowing I am multi-ethnic, Giorgi is always quick surprise me with his culinary delights. However, aware my guests palates, I gave Giorgi a quick wink. “Let’s stay traditional, but of course with a touch of Georgian flair.” 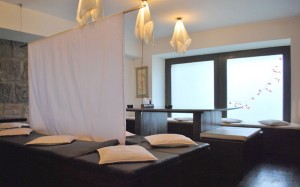 As Giorgi politely excused himself, my focus shifted to Medea. “My apologies, I need to speak to Fumio and Kenji  in Japanese.”

Once we concluded our business, Kenji flashed Medea a quick smile. “Has Gregory ever told you the story of when he returned from his first trip to Japan,” he asked with a heavy accent.

“I spent the summer in Kanazawa, just outside of Tokyo. I was visiting relatives and studying Japanese. When I came home my grandmother, Hanako, asked me what I had  learned. I was quick to share with her that I learned I had an LA accent when speaking Japanese. But not to worry, I worked hard to correct this flaw.”

Both Fumio and Kenji erupted euphorically. Fumio was first to realize that Medea did not understand the humor behind the story and was quick to explain. “His grandmother, Hanako Takeuchi, was born in Los Angeles.”

Medea now joined in our merriment. Seeing that our sake had arrived she was quick to take charge and ensure that our guests were properly served.

“Grigol, when did the Japanese side of your family first immigrate to the States?” Medea queried.

“About 150 years ago. My great-grandmother, Yoneko Takeuchi came by way of Bremerton, Washington.”

“Wakarimasen, I do not understand.” Medea struggled with her Japanese pronunciation.

“And the Spanish side of your family,” Medea paused slightly. “When did they come to the States?”

“With Cortez actually. We Alonzo’s were quite the conquistadors. We raped, robbed, and pillaged with the best of them.”

Fumio patted me on the shoulder. “Share with Medea the James Bond story.” 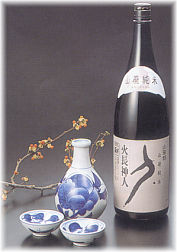 A smile filed my face. “In the film, ‘You Only Live Twice,’ Bond is served sake. 007 is quick to show his cultivated palate and country club manners and comments that he especially enjoys sake when it is served at the correct temperature, 98.4 degrees Fahrenheit.”

“Yes,” Kenji replied. We Japanese have long associated overheating with low grade sake. Heating is used to mask the impurities of cheaper sakes.”

“Ah so desu ka? Is that so?” Medea broke out in laughter.

“Kampai,” we raised our glasses in the first toast of many to celebrate the evenings festivities.

Sake, more properly called nihonshoshu, can be served at a range of temperatures. However, true connoisseurs tend to favor serving on the cool side. Pending on the brand, I prefer my nihonshoshu at room temperature.

“If chilled, 68 degrees Fahrenheit is quite appropriate,” Fumio added.

“Once again, depending on the brand of nihonshoshu, 50 degrees Fahrenheit is acceptable,” Kenji broke in.

“So you see Medea,” Fumio smiled politely. “Mr. Bond, James Bond may be a connoisseur, but with regard to nihonshoshu, he is most definitely not an aficionado.

When our food arrived, we all delighted in the sumptuous feast before us. Agadashi tofu, gyoza, yakitori, motoyaki, tempura, sashimi, maki and nigiri sushi, unagi, and my favorite, soft shell crab.

Several dishes and many flasks of nihonshoshu later, we finished out meal.

“In Japan,” Kenji struggled to express himself clearly in English. “We say a real man can drink 8 flasks of nihonshoshu.”

“Only men in a samurai film,” Fumio laughed.

“What happened?” Medea asked with interest.

With fond reflection I laughed under my breath. “Let’s just thank the gods for taxis. Oh yes, and the maitre d’ who got me into my cab and safely back to base.”

“Gentleman, shall we now imbibe in some fine Georgian white wines?” Fumio queried.

“Yes,” Medea was quick to add. I have something very special for you gentlemen to try.”

“Medea is referring to a lovely Georgian wine called Kisi.” I then called for our server to invite Giorgi to join us.

Medea, confident in her tone, “Kisi is fermented and matured for 5 months in traditional Georgian amphoras and another 12 months in oak barriques …”

But that my friends is another story …

ELLINGE CASTLE, Sweden, PRNewswire -- On behalf of the Purity family we are … END_OF_DOCUMENT_TOKEN_TO_BE_REPLACED