What is a supra? This is the Georgian word for a “feast.” Food and drink are especially important to the cultures of the Caucasus. The supra is comprised of a vast array dishes oftentimes representing the various regions throughout the country. Let’s not forget the wine. The supra is also accompanied by large amounts of wine and a dinner can last for several hours.

During a Georgian supra, the role of the “tamada or toastmaster,” is an important and honored tradition. Since the dinner is more of an event rather than a meal, the tamada is expected to keep the festivities moving along and ensure that the wine keeps flowing. Since the tamada is in essence an entertainer, it is not unusual for our toastmaster to sing songs or recite poetry, and of course, make the obligatory toasts.

Since it is my last day in Tbilisi, Medea’s family have honored me with a supra. Medea’s mother, Dedisimedi Khetsuriani is a chef par excellence. Her specialty is Kakhetian cuisine which which is quite befitting as my favorite Georgian wines are from the Kakheti region.

Georgian cuisine is somewhat Mediterranean and Middle Eastern in flavor. Ground walnuts and cooking with walnut nut oil is what gives Georgian dishes their distinct and savory flavor. Also characteristic of Georgian cuisine is the spice mixture of khmeli-sumeli which combines garlic, chilies, pepper, and coriander. What, no saffron to such a rich blend? Georgian chefs prefer to substitute saffron with dried marigold petals. Meat dishes are not only the most popular, they are typically served with fresh parsley, dill, coriander and scallions.

Since boyhood, I have been reading the adventures of Marco Polo. The quest for spices has always intrigued me. Men willing to travel thousands of miles through uncharted lands to find the “end of the rainbow.” Georgian cuisine is completely indicative of what lies at the other end.

At length, dinner was served. To my delight there was batsurma, grilled lamb, and chikhirtmi, a lemony chicken soup. An assortment of dolmas, tomatoes, eggplant, and grape leaves stuffed with beef. A particular favorite, karcho, a rich spicy rice often flavored with lamb broth. A second rice dish, shilaplavi is also served with potatoes. Kinkali pork dumplings and of course, fresh baked lavash bread.

“Medea, will your Uncle Shalva be joining us for the supra?” I queried.

“Who knows, he is often so busy with work.”

Shalva Khetsuriani is the head of the Georgian Sommelier Association. I’m not actually sure if he is a blood relation or a friend of Medea’s father, Khevitso, whom he brought into his family as the Khetsuriani clan have opened their hearts to me. I have known Medea’s father since my first trip to Georgia. He has always been instrumental in helping me with the necessary documents for export such as, bills of lading, and letters of credit. In fact, it was Khevitso who first introduced me to Medea.

As the supra progressed, we shared several bottles of wine, however, I would like to focus on three semi-sweet selections. Kindzmarauli, Khvanchkara, and Ojaleshi.

Regarded as one of Georgia’s premier appellations, the wines from Kindzmarauli are indeed a national treasure.  Our Telavi 2007 Kindzmarauli is vinified from saperavi grapes and have a little natural residual sweetness. This gives the wine an appealing and rounded texture. Inferior Kindzmarauli can sometimes be overly sweet and feel sticky on the palate. Our selection is a deep inky purple red with notes of crushed blackberries, damson jam, and spice on the nose. To taste, there are vivid berry fruit flavors that are gently sweet with supple tannins. This wine pairs best with sweet cakes, farmhouse cheeses, and walnuts.

“Khevitso, what is it about Kindzmarauli that you love?” I queried.

A smiled filled his face. “I love saperavi, it is our national grape. Kindzmarauli displays  the versatility of this grape.” He then popped a walnut into his mouth. “It also goes well with walnuts.”

The second of our semi-sweet wines is a 2005 Khvanchara from Tbilvino. It is a blend of two local specialities, Alexandrouli and Mujuheretuli. This wine comes from the picturesque slopes of the Cacusus Mountains of northern Georgia.

Khvanchara is a deep purple in color and our wine is no exception. There are aromas of smokiness and wild strawberries that are quite alluring. On the palate there is a subtle blend of dried fruit, pomegranate, and a hint of caramel. There is plenty of lively acidity to keep this wine fresh and balanced. Try it chilled at about 50 degrees Fahrenheit as an aperitif, or with chocolates and nuts. On a different note. It is well-known that Khavanchkara was a particular favorite of Joseph Stalin.

“Grigol,” Reza, Medea’s brother, called for my attention. “Did you know Stalin was a Georgian? his real name was …

“His name was Ioseb Jugashvili,” Medea’s grandfather, Anzori, broke in. “The name Stalin mean, ‘man of steel.’ I spit on his grave!” He said with complete scorn and disdain. “Pour the next wine.”

Medea selected a 2005 Ojaleshi from Teliani. This is an interesting and often over-looked wine by Western palates. Ojaleshi is an intriguingly pleasant wine from grapes of the same name. It is dark ruby red in color with a delicate herbaceous bouquet and hints of cherry and raspberry. It is well-balanced between fresh acidity and natural sweetness.

“It can be served as an aperitif or with any desert,” Medea was quick to add. “I prefer Ojaleshi chilled at somewhere between 46-54 degrees Fahrenheit.”

One of the things I like most about Georgian semi-sweet wines is their versatility. These wines pair nicely with a wide array of foods. In Russia, Georgian semi-sweet wines are often paired with huge platters of red meat. Russians love to quaff down a seemingly endless stream of wine during a barbecue. Another point I will make about these wines is they can be served as an aperitif or with any desert. They range in alcohol content from 11-12 per cent and are quite mild. Room temperature or slightly chilled, it makes no difference, Kindzmarauli, Khvanchara, and Ojaleshi are simply a delight on anyone’s palate …

As my plane began its ascent, I drifted languidly into thought of a time long since gone by. A time of heroes, magic, and enchantresses. Just before dozing off my thoughts settled on the Golden Fleece, Jason, and his marriage to Princess Medea of Colchis … But that my friends is another story … 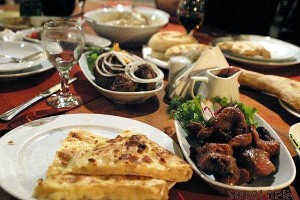 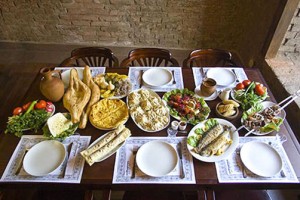 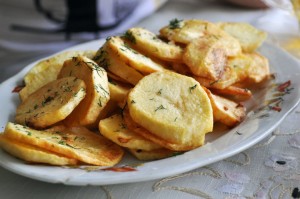 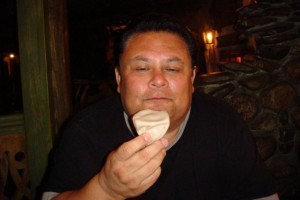 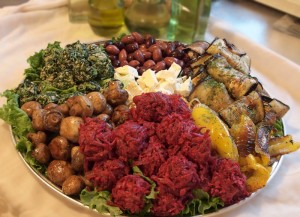 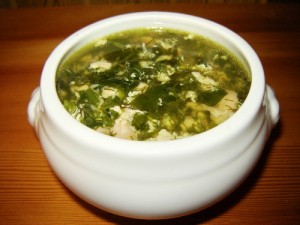 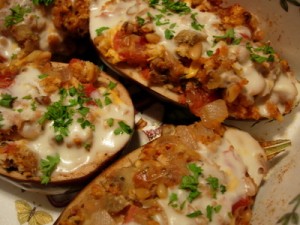 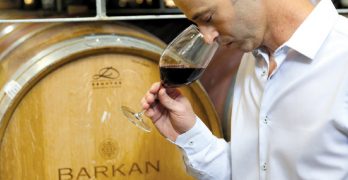