Wes Hagen is decidedly one of, if not the, most entertaining winemakers in the Santa Ynez valley.  His vineyard tour is more of a wine class held amongst the vines between his home and Cathy and Steve Pepe’s home.  From this one spot we could see the sheep grazing on the vegetables (“turning cover crop”) purposely planted between the vines and keep our ears open for every drop of Hagen’s witty intellect. 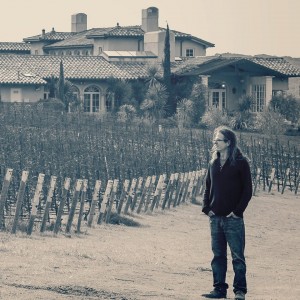 “I’m a competent vineyard manager and winemaker,” began Hagen.  “I started here permanently in December of 1994.”  A handy Fact Sheet delivered this information: They purchased the vineyard in 1994, planted Chardonnay and Pinot 1996-1998, the first vintage was 2000 in the Lompoc Ghetto, they get about 10 inches of rain a year, hand harvest at night, the wines are aged 10-11 months and released 6 months after bottling.

Then came a little history lesson.

We learned that 12 million years ago the area was completely under water which accounted for the marine deposits/white stones still found in the soil.

All wine came from the forest grape, a hermaphroditic grape that grew diverse vines.  The grapes adapted themselves to the different places it traveled – via bird feedings and droppings according to Hagen.

Now, fast forward to present day where a long growing season accounted for longer hanging time, and translated to ripeness on the vine. Hagen mentioned buying fruit before it is ripe and how his ripened naturally.  Being located on the 37th parallel Clos Pepe had the longest and coolest growing season that benefited from ocean breezes.

Hagen needs 7 clusters of grapes to produce one pound of Pinot because, as his Pinot skin is thicker, it lessens the amount of juice per grape.  But it also accounts for a darker color in the glass.

“As 60 percent of wine is consumed without food, wine is a cocktail,” Hagen said.  “People have a more ‘stylistic appreciation’ and I want wine to taste more like the place than how I made them.  Every five years or so I make a big one, and it gets high ratings as it stands out against other Pinots.  But that’s like having a Pam Anderson verses a ballerina.  People notice big round things – but I prefer ballerina to Barbie.”

Made from Pinot Noir in the Champagneois method there was a lovely Brie on toasted French bread nose followed up with apricot, strawberry and rose petals in a lovely long finish.

Hagen called this “A wet nap for the mouth.”  I called it creamy, with Asian pear and some grassy undertones.

A blend of Grenache and Syrah gave off hints of mint, raspberry, eucalyptus and a balanced finish.

Hagen said this one had received high scores.  Juicy strawberries came to mind.