Part 2 of a Tasting with Clos Pepe winemaker Wes Hagen, in which Wes allowed me to tape every little tidbit of his philosophy on wine and the wine business:

At a certain point during my note taking, my husband flipped on the audio recorder of my cell phone.  I had been diligently writing down as much as I could, but I was concerned that I wouldn’t get all of Wes Hagen’s philosophical one-liners, or what he referred as his “take-home messages.”  I played the tapes when I got home and this is what made me smile and pause a second time:

“A young wine looks great naked, as it’s good to look at but good luck having a conversation at table.”

“When the baby fat falls away the character emerges.”

“Like dating a grandma – it’s all about conversation and not about beauty.”

“French oak doesn’t get me as excited as a Lumberjack.”

“I don’t have any apologetic shit (about cellaring) – take it home tonight.”

“An hour at the table, with people in love, is a good wine.”

“When the going gets tough the tough get drunk.”

“I practice a new kind of farming called ‘common sense’ as we are 80 percent organic only because it makes better wine.” 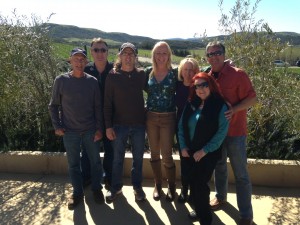 “Sold out for those people, not for the in group.”

“I’ll be doing a book ‘50 things I wish I knew before I was in the wine business’, a bathroom book, with short little anecdotes, like yes, you can move a barrel off of the barrel rack without having to empty it.”

“And I’ll be doing a food and wine pairing book, an anti-text book on how to find your own flavors, not of what some French dude says about Foie Gras.”

“I like wines that are more jazz than heavy metal.  Those same notes, D, C and A, over and over.  Great Pinot Noir is jazz.  The idea that we’re moving through time more creatively.  Heavy metal is so monolithic you have to pay attention to it while jazz is orchestral.  Sending a wine like this to Robert Parker would be like sending a beautiful orchestral recording to Cream magazine.  They’re used to getting music from Def Leppard and they don’t get Debussy.”

“Taste 100 wines in a row, what is going to stand out?  Delicate?  Elegant?  Wine is judged like cars are – based on how hot the bikini girl is standing next to it without ever taking it for a drive.  Taking it for a drive is like drinking at table.  And how well it integrates into a meal is how it should be judged, but to a critic it’s how well the wine dominates its peer group.”

“If I make a dominating wine I basically ruin my friendship with my chef friends, and I want 50 percent credited to the meal.  The perfect meal is 33 percent wine, 33 percent food and 33 percent company.  I’d rather drink shitty wine with this group than the best wine in the world with a bunch of dicks.”

“…I joined a friend at Senor Taco in Pasadena with a full carafe of hearty Burgundy made by E & J Gallo.  That hearty burgundy was better wine with my best friend than wine with a dick.”

“The right wine with the right people, that’s gestalt.”

“Richard Nixon, believe it or not, would pour Bordeaux secretly at the White House into an American bottle – and that bottle stayed by him while others had California Cabernet.  You’re not allowed to serve imported wine at the White House.”

“After a meeting with our new marketing people, now officially our drinking window starts with one word, ‘now’, you can drink this now.”

“This wine has got some hips and it’s not afraid to shake them.”

“You can tell I’ve been drinking when I bring up the anthropology of breasts.  Do you know why men are attracted to round breasts? Anthropologists say because it looks like the butt on a person.  So if you are coming or going men can see something that looks like a butt.”

“Intensity to intensity and structure to fat in food pairing.  The third rule is that sometimes it’s best to match low alcohol wine or beer with spicy food.”

“Wine is a shitty working buzz.  I drink two glasses of wine I want to quit and find a hammock.  Beer I can drink all day and still work or play Frisbee Golf.  Unless it’s Belgian, as it’s like 10% alcohol.”

“I’m not a hater of big ones as now I make them.  But I do believe that there is an appropriate wine for everything.”

“The best thing about being ADHD is I just don’t give a f— about being late.  You guys are my focus, and eventually the next people will be my focus, but not until I’m done.”

As a child Hagen, cleaning up after his parent’s dinner parties, wondered, “What is this magic potion that turns lawyers into children?  Then they’d bring me their glasses to wash after dinner and say something like, I’m not saying a 7 year-old shouldn’t drink wine but my wife says this 71 Latour shouldn’t go down the drain.  So I thought wine was a time machine that took me to some magical place, has a wonderful ability to unlock something in us so we can enjoy each other and causes interaction among people talking about what they love.”

“And there’s plenty of wine if you want to taste everything again.”

LOVINGSTON, Va./PRNewswire/ -- Virginia Distillery Company and members of the … END_OF_DOCUMENT_TOKEN_TO_BE_REPLACED