Even though my actual career is writing about wine and spirits and consulting for wine based businesses and events, it seems that I’ve been organizing and hosting a lot more charity wine events than usual.And there is always one winery that has supported all of the non-profit events when asked by me, or by others: Pulchella.

To name just a few off the top of my head:Pour into Haiti, Pour into Sandy, Sunset in the Vineyard, a Toast and a Wish, the Santa Clarita Wine Classic, Vine 2 Wine and the new event, morphing the two, the new Vine 2 Wine Classic.And most of these are annual events. 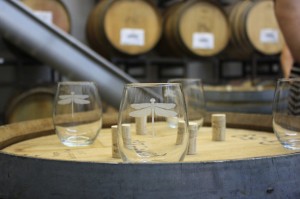 Now, with Pulchella opening the only licensed and bonded winemaking facility in the Santa Clarita Valley, and wanting to keep my reputation for finding new venues for Eve Wine 101 events, it was a logical step for me to ask winemakers Steve Lemley and Nate Hasper to open up the winery for a fundraiser for my church, the Unitarian Universalists of the Santa Clarita Valley, www.UUofSCV.org for short.

Steve and Nate had donated to my church’s annual dinners and tastings for years.As I worked as the winery’s first unofficial “publicist” (Steve’s term) we had an unofficial “trade” of services – and more of an official respect for one another.

So, my church was the first, the little church that could – and did – get first dibs on a wine tasting event at the crush pad.Steve said he could manage up to 70, he upturned barrels to turn them into tables, created a raised platform/stage for speakers and set up a nice check in-and-out area.

Steve and Nate were there along with assistant winemaker, Jeff Prange, to lead us through a tutorial and tasting of several of their Paso Robles wines:

After Steve gave a short introduction – “Thanks for coming and supporting the church!” – Steve and Jeff talked about the flavor profiles of each wine and a little history of the winery.Pulchella had started in 2005 and went commercial in 2010.Steve said, “We like to let the wine make itself…the fruit dictates characteristics of the wine – that’s our style –we let the land make the wine while we just control the quality.”

Steve went on to discuss winemaking practices and answer questions from the group. 1.How secondary/malic acid is converted to malolactic acid and that’s what adds a creamy texture to wine.  2.Alcohol content can fluctuate by a percentage point or more.  3.It can take some 20-hour days “to express what you are capable of doing in blends.”

Jeff talked about how wine grapes soak up soil, flora, fauna and that process is commonly referred to as the terroir.Then he discussed tasting:“Don’t drink as fast as you can; instead look, smell, and then taste.” Begin by checking the color by holding your glass over a sheet of white paper, swirl the wine, notice the legs (equals the level of alcohol content).Note that as a white wine ages it will turn yellow then brown; while red goes to dark red to lighter red, then brickish, and then to brown.  Smell and then swirl and smell again.Now, Jeff told the group, “get your nose in there.”  It’s the taste and smells that make the wine interesting.

Steve added that the 2011 vintage has aging potential, or if it’s your preference, drink it now.  Decant your wine, according to Steve, only to introduce oxygen. White wine, that is usually not decanted, we want to drink no more than a year or two after bottling.

As we neared the end of the tasting, Steve announced that if anyone wanted to purchase any wine that day they would give 20 percent back to the church.One more instance of Pulchella’s unexpected generosity.

The winery is expanding this year to better accommodate winemakers that reside within a 200 mile-radius.   And though they are near capacity now, most of the wine in the winery barrels are Pulchella.And of that, 85% goes to their wine club. 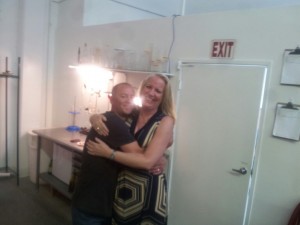 All in all it was a good 90-degree day to spend inside a winery.With three educators, a nice line-up of different varietals, a good crowd of church friends and their friends, nice stemless glasses (that I witnessed are nearly impossible to break), and a winery sink or floor drain to use as pour out buckets – we didn’t lack for anything.

Eve’s Wine 101 would like to welcome to our newest sponsor Santa Clarita, California, SantaClarita.com! You can see now their advertisement on every page of our site.  Sounds like a good plan for your biz to advertise with us too?  Email me: eve@evewine101.com

BLADNOCH, SCOTLAND sing - In celebration of its 200 year anniversary in 2017, … END_OF_DOCUMENT_TOKEN_TO_BE_REPLACED