There are times that I wish I was not so technical but I am what I am, the plague of being a rocket scientist for 30 years I guess.  Recently I wrote an article on corks where I covered the proper way for a server to place a cork to the right of the patron who ordered the bottle and why this is done.  In this article I explained how you can check for leaks and verify that the cork is soft from proper or improper storage.  There are quite a few people who feel that corks do not offer the best protection for wines and therefore every aspect needs to be reviewed to guarantee the wine is servable before it is poured.  So what about screw caps?  How many times have you seen servers leave the cap to the right of the patron who ordered the bottle for his or her review?  Should this be done rather than the server immediately dropping it into their apron as they would the foil from a wine that has a cork?  Have you ever seen a server inspect the cap before pouring the wine?

This week I opened a bottle of wine from Paso Robles that had a screw cap and found a big surprise,  something that I would have never had suspected.  Below are three pictures of the screw cap that I removed. 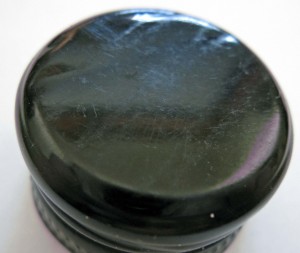 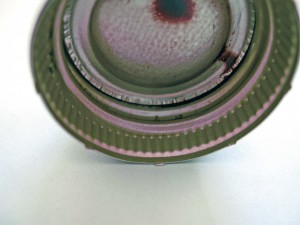 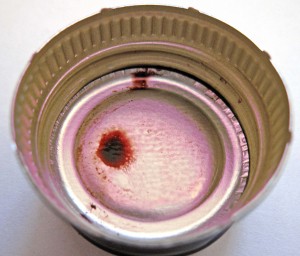 Looking at the outside of the cap you notice that it  is deformed and dented.  These caps are made from aluminum that is very soft and thin.  It doesn’t take much to cause an indentation.  In this case  the bottle that I opened this indentation deformed the inner seal causing a leak.  This can be seen by the wine that has migrated up and over the seal in the two pictures of the inside of the cap.  I also found wine in the threads of the cap which are difficult to see in the pictures due to inaccessibility of the camera.  However, this creates a situation that is no different than a wine that has a cork closure resulting in oxidation of the wine.

In engineering we are often asked to do risk assessment of situations.  Which would be more likely to allow oxygen from getting into the bottle through a leak a cork or a screw cap?  This could be lengthy as there are many variables.  If wines are properly stored to prevent drying they have a lot of benefits.  The cork is recessed and has a lot of surface area to seal the wine in the bottle.  This removes impact damage as a probable cause as well as the cork has  a very large seal.  Looking at the screw cap we see that the cap is on the outer surface of the bottle making it susceptible to impact during bottling, boxing, shipping and handling.  The seal inside of the cap is very small in surface area and the slightest deformation will allow wine to leak out and oxygen to migrate in.

In conclusion, I am beginning to realize that what has been stated over and over in wine circles that it will probably continue to take many years, if not decades, for us to realize the truth about the pros and cons of screw caps over cork or vice-versa.  For me, I will probably ask to see the screw cap if I order a wine that has such a closure after this learning experience.  I actually believe that the cap should be placed on the table next to the person that ordered it for inspection when served at a restaurant or bar, just as a cork would be.  It may not be as romantic as a cork being placed on the table but it allows the guest the ability to evaluate the seal before the wine is poured.  The bottle that I discovered the leaky screw cap was not over oxidized but it did not taste the same as what I sampled in Paso.  As a recommendation in purchasing bottles with screw caps, I would avoid the ones that show signs of impact or have dents as you may not be getting what you expect.

Art Beyond the Glass VII: L.A.’s Top Bartenders Come Together To … END_OF_DOCUMENT_TOKEN_TO_BE_REPLACED