Why do Indian writers evoke more imagery than their American contemporaries? If you believe that reading prose should be as moving as reading poetry, you must pick up any of these recommendations, turn to any page, read a paragraph or two and see what you think. Maybe it’s our differences that allow for greater perceptions. Maybe it’s our sameness that speaks to us as we read, as we, ultimately, all are immigrants …

Jhumpa Lahiri, Interpreter of Maladies: This debut work, international best seller and Pulitzer Prize winner, introduced me to my love for Indian writers. Reading it on a plane trip I recall a woman that spied me reading the book, and, from several aisles away, had to comment how worthwhile she had found it. The compilation places us at different times in the lives of people of Indian descent. Nine stories in one slim volume; as I look over it today I find I want to re-read it. My favorite was the one the author chose to title her work from: our Interpreter takes place in India. He translates for a medical doctor, languages the doctor doesn’t know and neither value. In the Interpreter’s other job, as a tour guide, he is unexpectedly asked to “interpret” more than he is able to.

I could also easily reread her second novel, The Namesake, which a film was recently released of. Two first-generation Americans are the children of an immigrated Indian couple. The boy, Gogol, named after the Russian writer, seems transfixed in his maturity by the unexplained shadow of his naming. He changes it, himself, and it isn’t until he looses his father that he returns to his Indian roots and all that roots can do to stabilize us. No matter what name we take.

Rohinton Mistry, A Fine Balance: In a State of Emergency, called by the Indian government in 1975, four virtual strangers are forced together for protection, food and, a very possible dismal future. Very neatly tied up at the story’s end; I was reluctant to let go of the characters I had seen through so much. Not only do you learn all about the Indian caste systems, religions and languages, you also survive the violence to see the beauty the storyteller gives us in his stellar writing and turning of events. The cover of the paperback depicts a child being balanced on a plate held up by a stick. I didn’t expect this to truly happen in the story, but it did. One of my favorite books of all time, and, to think, I might have missed it if I hadn’t started the journey into Indian literature.

And also by Mistry is Family Matters: How a family manages its patriarch stricken with Parkinson’s disease is sad in its truthful telling. Set during 1990s Bombay, the father’s illness is further complicated when he is bedridden with a broken leg. His two stepchildren turn his care over to their half-sister and her family – the stepchildren keeping his larger home for themselves. What follows is a character study of how each reacts to the omnipresence of illness and familial duty. Due to their concerns with their nuclear families and financial needs – little thought is spent, except by the half-sister, to their father’s obvious discomfort.

Amit Chaudhuri, Freedom Song: This collection of three novellas meanders through Bombay and Calcutta. The style is as close to poetry as I have ever read; albeit not in developing story inasmuch as mood. I found myself writing down so many passages from the first story of the collection I admit that I hardly gave the second two just as much thought. A Strange and Sublime Address, my favorite, is about a boy from Bombay that visits his poorer relations in Calcutta. The end of every chapter is stunning. Here are two:

“Though Chhotomama was far from affluent, they ate well, especially on Sundays, caressing the rice and the sauces on their plates with attentive, sensuous fingers, fingers which performed a practiced and graceful ballet on the plate till it was quite empty.”

“Her legs, like two romantic indefinite paths on a mountainside, were lost in her sari’s vast landscape.”

Manil Suri, The Death of Vishnu: Another first novel, the story is about lazy alcoholic Vishnu, who lies dying on the first floor landing of the Bombay apartment building for which he is the houseboy. While the reader, at first, can’t imagine that as a life, Vishnu lays while the life around him scurries by on its own. As Vishnu crawls, or lies still, for the entire book, he begins to recall his healthier days and we can then start to see more depth. Indian culture seen through Vishnu’s memories, and the thoughts of all of the healthier inhabitants of this small apartment building, are remarkably engrossing for such a slight premise.

Sanjay Nigam: Snake Charmer: Another debut tells the tale of a snake charmer, that, angry over a snake bite, bites and kills his snake. Consumed by guilt and nightmares he tries to continue on without his beloved snake and livelihood. If he hadn’t played a “false” note the snake wouldn’t have rebelled against him to begin with. Is this a story of clashing cultures? The answer will change the Snake Charmer’s destiny. It also allows the reader a peak into Indian culture as the snake charmer seeks help from all of the resources within his grasp.

Kiran Desai, Inheritance of Loss: This one is not a debut – it’s actually the second for this second generation Indian writer (Her mother is Anita Desai). It’s 1980’s India, deep in the hills bordering Nepal and Tibet. The story centers on a retired judge that lives with his cook and teenaged granddaughter. On the flip side of the tale we read about the cook’s son, diligently working in a Manhattan restaurant and trying to fit into the American lifestyle. And the granddaughter’s budding romance with her teacher. Comparison of class and country is examined in the most unexpectedly beautiful prose. While waiting for something to boil we are assaulted with every view of the cook’s home and health:

“The walls were singed and sodden, garlic hung by muddy stems from the charred beams, thickets of soot clumped batlike upon the ceiling. The flames cast a mosaic of shiny orange across the cook’s face, and his top half grew hot, but a mean gust tortured his arthritic knees.” 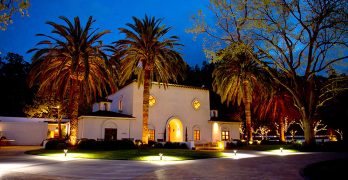 Wente Vineyards has been around forever (see below, since 1912 to be exact) and … END_OF_DOCUMENT_TOKEN_TO_BE_REPLACED