My wife, Tracy, and I moved to Santa Clarita in 1982 with hopes of providing our children with a rural and safe environment to grow up in.  That was over 30 years ago, we had mountains around our house and a goat farm just a stone throw away.  For entertainment we had bowling, the drive-in and of course Magic Mountain.  If you wanted to go out for dinner you really had only three choices, Cal Islands for seafood, Backwoods Inn for steak and El Chaparral for Mexican food. 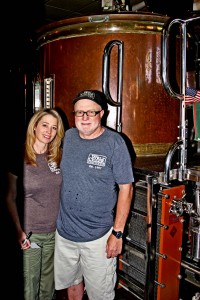 On April 1,1997 (interesting date to open a new business), Rob and Laina McFerren opened Wolf Creek Restaurant and Brewery which is located on Decoro and McBean Pwy in Valencia, California.  This restaurant was unique as well as satisfying a passion and drive that both Rob and Laina had within them.  So how did this all come about?

Rob and Laina, believe it or not, met in a restaurant and not just any restaurant but The Cheesecake Factory in Marina Del Rey.  Rob was a manager and Laina trained the servers.  While working at The Cheesecake Factory, Rob completed his BS degree at USC before going on to my alma mater, California State University Long Beach where he completed his MS in engineering.  Laina told me that she feels that Rob’s training in engineering has paid huge dividends in dealing with all the technical aspects of Wolf Creek.  Laina completed her Communications Degree at UCLA.  Rob and Laina continued their quest of opening their own restaurant while working in various restaurants to make a living.  Doing this not only increased their desire but provided valuable training that has led to the success of Wolf Creek.  One of their greatest attributes is their service and quality  of food, in my opinion.  Laina takes great pride in this and it definitely shows in her staff by the customers and the crowds of people that come back on a regular basis to eat at Wolf Creek.

The beers that are produced by Rob at Wolf Creek are his own recipes and tend to be styles that have a solid hop character.  They have a full body and are full of flavor.  What I personally enjoy are the changes in types of hops which add unique variations to a beer.  Too many beers, in my opinion, use only Cascade hops which give that citrusy grapefruit flavor.  Rob’s adventure started 22 years ago, according to Laina, when she bought him a home brew kit from Beer, Wine and Cheese in Woodland Hills, Ca.  This shop has been in existence for 35 years and has sponsored the Maltose Falcons since 1974.  The Falcons have been responsible for many national club awards and there have been many brewers that have gone professional from this group.  So with the Christmas gift in hand the fire was lit, as it has been for many of us that are involved with this fascinating hobby.  Rob wanted to go further than just making homebrews for friends so he went to Goose Island Brewery in Chicago where he attended a brewing program sponsored by the Brewers Association.  The remainder of his training was provided by the people that he purchased  his Bohemian Brew System from and can be seen behind the glass barrier at Wolf Creek in Valencia.

To see how well professional brewers are doing with their beers one only needs to look at their track record in competition.  Rob’s very first award was at the California State Fair in 2001 for his fantastic Howlin Hef, which he still brews today and is one of my favorites.  This is a wheat based German beer that displays aromatics and flavors of banana and clove.  Many micro-brewed versions are over hopped for this style and therefore are outside what the judges are looking for in competition.  To show the continued success of his Howlin Hef, he has won a gold medal at the LA Fair a couple of times and took the “Best of Fest” at the inaugural Ventura Beer Fest.  Overall, Rob has won well over 25 awards for various beers that he has brewed.

I asked Laina what both of their favorite beer styles were and her answer was, “I think Rob would tell you it is impossible to pick a favorite style, it’s like picking a favorite child.  He tends to like beers with a lot of flavor and substance in every different style.  I tend to lean towards the West Coast Reds, IPA’s and Pales with Rob’s Yellowstone being one of my very favorites.” 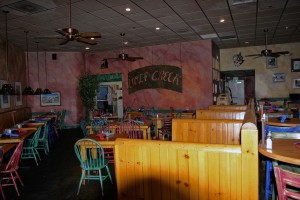 Once Rob and Laina made the decision to open the original Wolf Creek, a colleague of Laina’s that had an MBA from Harvard helped them by writing a business plan to present to friends to invest in their restaurant.  Since the original Wolf Creek new partners with outstanding credentials have joined the team being John Maly and Darren Utley both of which have significant business experience.  John grew his business,  Maly’s Beauty Supply, from 1 to 100 locations before selling it in 2006.  Darren was the original franchise owner of Baja Fresh, need I say more.  Obviously, they both have tremendous experience developing successful businesses.  These two new partners are both interested and enthusiastic in developing as well as growing the business of Wolf Creek not only as a restaurant but also as a commercial beer.

Since the creation of the first Wolf Creek Restaurant in 1995, they opened a second restaurant in Calabasas, Ca in November 2010.  The reviews of the location in Calabasas mirror those in Valencia from the service to the food and beer.  The Calabasas restaurant relies on beers produced at the original Wolf Creek as it does not have an onsite brewery.  With success comes additional challenges.  Laina told me they could not keep up with the demand of both restaurants with their present brewpub set-up and they also had many other restaurants and individuals asking for their handcrafted beers.  This is the challenge of dealing with the current climate and explosion of mircro-brewed craft beers.  So how does one increase beer production to satisfy the two restaurants needs and beyond?  You open a full size commercial brewery, easy answer but not an easy task,  However, with all of the aforementioned partners and plans in place it became a reality with their grand opening July 1, 2013.  This new brewery is supplying both Wolf Creek Restaurants as well as many restaurants in the area, and they have only just begun.  To read more about the Wolf Creek Brewery go to Eve’s Wine 101 (http://evewine101.com/2013/05/20/rusty-sly-wolf-creek-brewery-the-first-commerical-brewery-in-santa-clarita-valley/) for my previous article that covered this new addition to Santa Clarita. 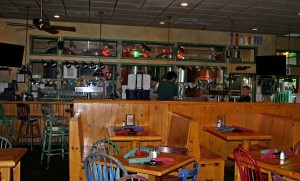 Although this article is focused on the beers I did mention that Wolf Creek was a restaurant.  I have had a few ask if it is a bar that serves food and I will tell you that is definitely not the case.  Look at Rob and Laina’s backgrounds, does this look like a couple that would just serve bar food?  Our family have been patrons of Wolf Creek since the beginning and have always been intrigued by the many unique items that graced their menu over time.  My wife and I never get bored.  We have eaten there for breakfast, lunch and dinner.  The food has its own unique flair drawing from Southwestern, Cajun and their own interpretation on pasta and pizza.  There is a wide variety of food on the menu for you to chose from to satisfy any palate.  I was very surprised to learn from Laina that Rob designed many of the original dishes on the menu at Wolf Creek, though she quickly added, “along with a little help from me”.  What a team, no wonder they have had the success they have had and will continue to have.  Laina also said that over the years, their kitchen managers have contributed a lot to the menu, especially their daily specials.  Wolf Creek’s current chef is Martin De La Cruz.  Also, most restaurants bring in their desserts, however, Wolf Creek has their own on-site pastry chef,  Meghan Launier, with a variety of selections available daily.

In a nutshell, you can see that this Wolf Pack is destined for success.  From the creativity of Rob and Laina in developing food and beers that will rock your to the financial team of  John Maly and Darren Utley working their already proven successful business magic so much is on the horizon.  I can see the day that I travel to another state and can order Rob’s “Howlin Hef” on tap or in a bottle.  Their website sums it up best,  “As Wolf Creek grows, the original mission remains the same: To provide great brews, great food and great service in a comfortable atmosphere.”  Well said but more importantly, well done!

BLADNOCH, SCOTLAND sing - In celebration of its 200 year anniversary in 2017, … END_OF_DOCUMENT_TOKEN_TO_BE_REPLACED