Mama wants more…what a great idea for a book. Wish I’d thought of it. If I did there wouldn’t be a chapter on More Support. Or it wouldn’t take away the one thing I need to get through parenting. “If Mama doesn’t get the support she desperately needs, well then she’s gonna need more things like Prozac and Merlot to get her through her day. No one wants that.” I never had the Prozac, but give up the wine…?

Finding a local published author on a nationwide online book club I had just joined was a pleasant surprise. Even though she wasn’t accepting new “friends” and her profile was set to “private” it only slowed me down a nanosecond from shooting her an e-mail.

Before I met Stephenie I read most of her website www.mamawantsmore.com and felt I knew much about her. I expected a rich southern accent from the Oklahoma transplant. I expected both the Cheese Eater and Bald-Headed Monkey, from her first book, Living with Cheese Eaters and Bald-Headed Monkeys, to be with her. I expected her to mention her column that she wrote here and sent to her hometown newspaper and how she’s acclimated to the big move to the SCV. She didn’t disappoint.

Her only small-in-size inspirations, Bentley and Palmer, busied themselves as I would expect children of Mama writers would the hour we spoke at a local Starbuck’s, with juice boxes, Oreos and more than a couple of books to read on their own. They were well behaved cherubs; so I decided to start my interview. But, as an experienced mother, I wondered how long it would take before a demand for cheese was made.

It all started with more than a passing interest in journalism in high school, she had an earnest goal even then of becoming a syndicated columnist. In college this was cast aside just long enough to pursue a marketable degree in elementary education. She kept her hand in by taking an online course in novel writing.

After marriage and children came, Stephenie started writing down some of the funny insights she gained as a “Mama” and e-mailing stories to her friends. That morphed into weekly columns and blogging. Keeping her columns current with a mom’s perspective a recent one was entitled, “I Miss Tornado Season.” (Wait until her first California earthquake.)

She designed her own website when she decided not to be one of the many writers blogging. For a while she wrote a blog for Disney. She has completed a young adult novel that is set in the south during the 1960’s, but hasn’t found the time to do anything with it yet.

Raised and schooled in Oklahoma, she and husband Derek, left behind friends, family, and all things familiar to chase Derek’s dream job of becoming the Head Golf Coach at UCLA.

“When we were looking for a place to live, we were told that Valencia is the best place for families. Lots of people ask why we don’t live closer to campus, but we love it up here. We’ve found this community more than just welcoming. The great public schools, prices, and friends we’ve made make the commute worthwhile.”

Relocating was lonely at first, especially with a husband that travels for work and young children to entertain. So Stephenie took the opportunity to focus on her own dreams.

“It wasn’t until we moved to California that I started compiling a collection of my columns into one book. I was feeling displaced and a little homesick, so my mom encouraged me to spend the time focusing on my writing career.”

“I’ve always wanted to have a bound book with a title page, a dream I could attain through self-publishing. So I went for it and through iUniverse and was given the Editor’s Choice award for outstanding editorial quality. I personally believe that if you have a dream you want to accomplish, you have to do it yourself.”

One of Stephenie’s favorite things about living in the SCV is community atmosphere and friendly neighbors.

“I was spending a lot of time inside on my computer working on my book, which isn’t the best way to meet new friends, but a trip to our community pool changed all that.”

“The first time I struck up a conversation with another mom at the pool, I realized, later, that we forgot to exchange phone numbers. The next day my new pool friend tracked me on the internet. We quickly became friends and through her I’ve made lots of other friends who are now reading my stuff and supporting me.”

“I love getting feedback from my readers. The e-mails and notes I receive serve to validate an audience of mom’s that want compassion, humor, and what I call ‘positive Mommy writing’.”

“What do I want more of now? Time. More time to write. More time to hang out with my new friends.  More time to sit around and do nothing. But any mama knows that time is actually the one thing that there is never enough of. Writing is my true joy, and knowing that I make other mamas laugh and smile is why I find the time to do it.”

Being a member of the international mother’s group, MOPS, garnered her a position on the local leadership team. But how would other moms find her?

“You can order my book through my website, Amazon and BarnesandNoble.com. I’d like to call our local Barnes and Noble and see about a book signing or having the book available locally, but…I…haven’t made the time. Time is obviously something that I have an issue with, but somehow I manage to find enough to take care of my kids, my husband and, late at night, my writing.”

At this point in the interview the cheese kid and the monkey kid wanted more Mama. And, more surprisingly, the lady that had taken her attention for the better part of their hour.

“Hold my hand” came from her little one, Palmer, aka Bald Headed Monkey, and I was more than happy to oblige. Turning my pen and pad over to them I asked what they would like to say in mom’s interview.

Palmer continued with, “We are going to the Del.” This in Palmer-speak was the Hotel Del Coronado in San Diego and spending time with his grandparents for Mother’s Day. From Bentley, aka Cheese Eater, was a quote prompted from his mother.

“What did you tell me when I asked if you wanted to be a good writer like Mama?”

“I’m already better.” I can’t wait to see how that will translate in Mama talk.

The next book Eve has to read is recommended by Jeff Jacobson: What to Drink with What You Eat: The Definitive Guide to Pairing Food with Wine, Beer, Spirits, Coffee, Tea – Even Water – Based on Expert Advice from America’s Best Sommeliers by Andrew Dornenburg. “I find it one of the most useful research tools I have, and that I have given several away as gifts to friends and family members. I like it so much that this is the second year that we are featuring it at the Wine Classic.“

Mags Kelly runs the book club for The Betty Ferguson Foundation (BFF). She sends monthly post card reminders for the upcoming choices and to meet at Borders the second Saturday of the month at 10:30 a.m. For May they are reading A Heartbreaking Work of Staggering Genius by Dave Eggers and The Swallows of Kabul by Yasmina Khadra in June. I read the former and highly recommend it, Eggers writing style has a captivatingly modern pulse to it. 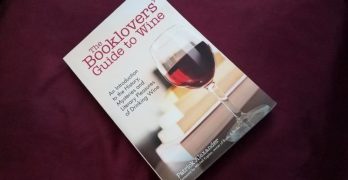 Okay all of you “book club” people, I know the real reason you meet: to talk … END_OF_DOCUMENT_TOKEN_TO_BE_REPLACED