Visiting Vegas gave us the opportunity to try another Perlis Pick, Pinot Brasserie, as we wanted something grand for a night out, and loved the idea that Perlis knows all the best places, with this one of having the added benefit of no corkage fee.

Our waiter, Fab, was as attentive as we wanted him to be.  He poured the 2001 Joseph Phelps Insignia we brought in as quickly as we wanted it and let us linger before we settled in and ordered…the 20 ounces of Chateaubriand with both Béarnaise and Bordelaise sauce for two. 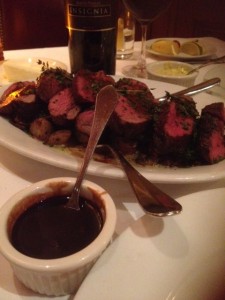 Our steak, ordered medium, had been sliced and placed on a medium-sized platter over roasted potatoes, spinach and mushrooms.  We didn’t need to order appetizers, salads, soups or sides as the dish would definitely cover us.  Fab suggested we dip into both sauces – which we did – for the perfect blend.  I noted some dill in the Béarnaise that made it that much more tasty.

We also offered Fab a taste of our wine and he poured himself a splash.  He lingered as long as we wanted him to…as we discussed wine and ended up sharing photos of our children.

Note: When we chatted about wine Fab mentioned how people sometimes tell him what they smell or taste in a wine before sharing it.  He said that makes the experience entirely subjective.  He himself suggests coffee following a meal and described one selection as, if I remember right, a dark earthy roast with a hint of honey.  He said, with a sly smile, that he made up the honey part!

After our leisurely meal Fab brought us a Belgian chocolate soufflé with vanilla sauce on him, as a thank you for sharing our wine.  Rich and warm, it was impossible not to eat the entire dessert though we were amply full from devouring our main dish.

Then, you guessed it, we couldn’t resist a little coffee – only because it was guaranteed fresh as it is served in individual French presses.  I don’t recall which we had, mine was decaffeinated and my husband Eddie’s was full strength, but Fab did serve it with a small metal pitcher of honey that had been warmed and slightly watered down.  (He didn’t need to tell me that using it would add that hint of honey we were looking for.)

In conclusion I’d have to say the combination of outstanding service (Fab was assisted by Javier in bringing and removing our plates) and an equally outstanding menu.  In a place like Vegas, where the experience is everything, it was nice to find an experience that we would welcome experiencing again and again.

To see a better copy of the menu see this pdf version: http://www.patinagroup.com/restaurants/26/menus/Pinot-Brasserie-Dinner-Menu.pdf

Wandering around the Vegas casinos and all of the malls we stumbled upon Minus 5 Ice Bar in the Mandalay Bay.  (There was one in our own hotel, the Monte Carlo, which we somehow missed!)  My husband was enthralled with the idea of sitting in a frozen environment and having a drink.  Me, not so much.  It was expensive; I think $37 per person for two drinks each, a parka and a set of gloves.  But, in reality, it was not expensive by Vegas standards.  So, we went for it.

After you get “geared up” you enter an anteroom that was about 50 degrees before going into the final minus 5 room.  Once inside the bar, the first thing I wanted was a drink.  Most people ordered from the one page cocktail menu of sweet drinks but you could order anything – as long as they had the ingredients as the bar was small.  I spied Chopin vodka (made from potatoes) and went for a dry martini.  Everything was served in thick ice tumblers.  We were instructed to hold our glasses with both hands lest we drop them.  I didn’t see the issue, so what would be the problem with a broken glass made from ice?

We found a “booth” of ice, sat comfortably on furs, and leaned against the back of the thick ice seats.  I didn’t freeze.

When the bartender came around to pick up discarded glasses – most people didn’t linger for more than an hour – we had a few of our questions answered.  The room held up to 81 people not because of a capacity rule but because any more than that and their combined body heat would start melting the walls.  On busy nights they sometimes had to close the booths as the chandeliers above them would drop their large “lights” onto unsuspecting guests.  If a guest got sick only a blowtorch would remove the mess.

And finally, a photographer strolled around and took photos of the guests – no cellular phones are allowed – in glass frames, at booths or next to an ice sculpture.

Not sure I would do this again, but it was fun.  I’d suggest trying it at least once. 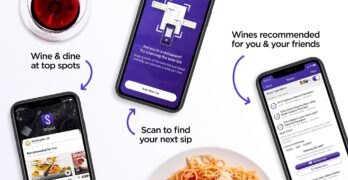 WASHINGTON (PRWEB) - Sippd has partnered with Skyy John of Tipsy Bartender, the … END_OF_DOCUMENT_TOKEN_TO_BE_REPLACED