There were more food, wine, lifestyle vendors and appreciative guests this year, in only its second time around, at Reyes Winery for the Sierra Pelona Valley Wine Festival last weekend.  While VIPs were given early access and other perks, every guest seemed to be feeling the VIP treatment with unlimited access to both commercial and non-commercial home winemakers, international dining options, and new lifestyle members showcasing their wares not seen at dozens of other wine fests.  And, a just a week before the event we were to learn this fest was the only fest on the calendar that would be a large scale outdoor event. 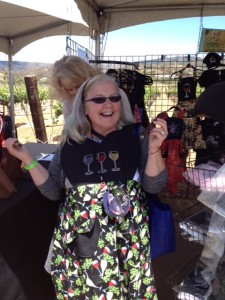 I wished I could have visited every tent but, alas, I sampled from most and these are my highlights:

The 2011 Bouquet Vineyards Merlot, made with grapes from Temecula, by winemaker Danny Mascari.  What an awesome bouquet!

Got a great photo of a cigar-smoking guest, wearing her wine yoke and trying on a really cool apron at the Agua Dulce Accent booth.

Both non-commercial wine labels, Du Nasi and Bobcat, were very well received at the fest.  Two friends making wine, what could be better?

In the Kym’s Kreations tent I found Ron and Kym Cappi and all kinds of goodies: hand painted barrel staves, wine-bottle shaped chalkboards, small custom-made paintings and my favorite: necklaces and key chains fashioned with corks –  so I had to buy the Pulchella Winery necklace!

Of course our very own locally owned and operated winery, with a tasting room in downtown Newhall, Pulchella Winery, had a tent so crowded that even I couldn’t get in.  No worries, I had just tasted and reviewed all of their wines with winemaker Steve Lemley already!

Coruce Vineyards and Winery 2012 100% Viognier (sweet and nice!) from the Bien Nacido Vineyard near Santa Maria, CA; and their 2012 Semillon (great fruit) with a blend of 90% Semillon, 5% Chardonnay and 5% Viognier.

Portos Bakery, I limited myself to what I think was called the “Dulce de Leche Kiss” and described on their website as “Light and crispy butter tart dough, filled with dulce de leche, topped with powder sugar” and it was OMG good.

I had reviewed a few of the reds from Chavez Cellars this year, so this time I tried and dug their 2012 California Chardonnay for its butter (from the time in oak aging) fruit and balance.

Happy to see that Persia Restaurant served up many of the items from their popular lunch buffet, and this was NOT in the VIP tent.

At Antelope Valley Winery many of the guests, including myself, were loving their 2010 Malbec for its peppery nose and full flavors on the palate. 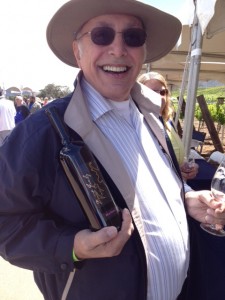 Chef Cindy Schwanke was in VIP tent, standing next to a table of paper cone-wrapped sweets her students had prepared.  (The 2014 beneficiary of the fest was College of the Canyons Institute for Culinary Arts.)

The 2012 Harris Ranch Biz Cabernet Franc was another winner.  The wine had a high alcohol percentage that was not overwhelming on the palate at all, very balanced.

Also at the Harris Wine Biz table was a very popular, very pink-colored Sangria they wanted people’s opinions on.  Made with Chardonnay, Merlot, vodka and tons of fresh cut fruit, it was very popular.  I heard later that Reyes Winery had an even more popular Sangria on their table!

BBQ Catering, aka Smokin Bar-B-Quties, had their yummy BBQ beans in the VIP tent.  I ate them up, leaving just enough sauce in my bowl to dip some grilled chicken into.  I also ran into Chef/Owner Sonja Randall at the event, she and her two adult children were having a grand time working the event.

One of my favorite couples, Susie and Kerry Clark, are the two hearts that make up Two Hearts Estate Vineyard.  They don’t surprise me anymore with their two-dozen bottles with grapes (Castaic, Lodi, Paso, etc.) or juice (Australia?) that they turn into extremely expressive wines.  This time I especially enjoyed, among others, their 2012 Australian Chardonnay, 2012 Monterey Chardonnay and the 2010 Castaic Syrah.

Isidora Designs makes both wine, and non wine, themed bags from clutches to duffels.  I snatched a card so I can shop online later.

Silver and gold awarded wines from the LA International Wine Competition had their own booth.  I enjoyed the Stark Raving Malbec made by Rosenbloom.  This was not a Malbec that needed food, it was very approachable now.

My Facebook friend David Simpson loved the treats served up from Truffles n’ Toffee…bummed I missed them myself this time!

Of course the Reyes Winery tent was the most sought after wine tent to visit, heck they hosted the event and they have award-winning wines too! 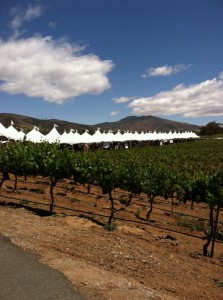 I got to sample the Tochigan Farms salsa with a Malbec, wanted more!

Golden Star Vineyards made a big impact on people with award-winning wines made in the high dessert AVA.   I made sure several people got to try the Perlis Pick 2012 Syrah and my own fave, Purple Haze, a blend of Zinfandel, Merlot and Malbec.

Artist Michael Harder had beautiful wine-themed paintings…there’s one I have my eye on still.  His website is called Hard Art.

The Six Foaks wine table was fun.  Six pals got together and made a lot of wine, and several of their newer labels feature original art of iconic film stars such as Sophia Loren, Audrey Hepburn and Natalie Wood.  I enjoyed several, including the Grenache-Syrah-Mourvedre blend and a Pinot Noir, from this non-commercial winery.

Chef Juan Alonso of Le Chene restaurant was serving up a Salmon (not crab) cake with cole slaw and dressing…it was truly a taste treat!

Though SCV Wine Enthusiast group leader and winemaker Doug Gould couldn’t attend, his red blend wine, “Lil Bastard” was there to be enjoyed by all.

Ooh oh!  And Eve’s Wine 101 Consulting LOVES the top-billing we received in the program under “supportive members of the media.”  Gotta love alphabetical listings!

The 5th Annual Harvest Festival – A WiSHful Evening at the Vineyard will be held on September 6 and will benefit the Wish Education Foundation. 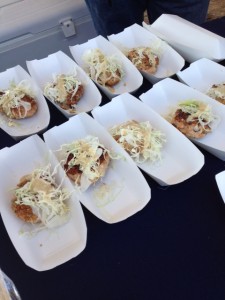 Reyes Winery is “happy to be part of one of California’s most exciting burgeoning wine regions. The Sierra Pelona Valley Vintners Association is an organization that brings together the talents and resources of its members, partners and community to promote the production and appreciation of fine wines grown or produced within the Sierra Pelona Valley AVA and surrounding areas. Nestled in the Sierra Pelona Mountains of Southern California, just 30 miles north of downtown Los Angeles, the Sierra Pelona Valley’s untouched natural beauty provides the perfect environment for burgeoning vineyards, boutique wineries, tasting rooms, and outdoor activities. Visitors can enjoy a day of discovery and relaxation exploring the area’s fine wineries, tasting rooms, events, and hiking trails.”

Love reviewing bubbly, and this time it was a Piper Sonoma Brut NV from Sonoma! … END_OF_DOCUMENT_TOKEN_TO_BE_REPLACED