My husband Eddie auctioned off a single malt Scotch tasting in our home, for 6 guests, this past November. The event is now coming up on January 10. Some of our friends have threatened to join our group and we might take them…for a price. 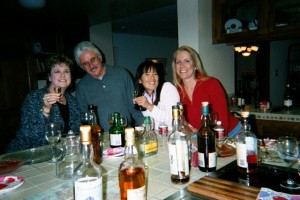 I visited Cookbooks Plus on Main Street in Newhall and found a rare copy of “Enjoying Scotch” by Dion Pattullo and Derek Cooper. As the “Water of Life” has been made in Scotland for over 200 years it didn’t matter that my edition was from 1980. Not much has changed in how Scotch has been produced. At least it’s not illegal anymore.

I’ve been bantering with Eddie across our u-shaped desk about how Lagavulin failed to copy Laphroig with its replica stills, water and land while Balvenie was developed by the Glenfiddich family using the same malt and water, again with the same findings: taste could not be duplicated.

So, back to making our plans, we printed tasting sheets, maps of the lowlands and highlands of Scotland and are deciding if we want to use our many existing wine glasses or purchase some new glasses. Either type can be used; depending on how serious we want to get.

In tasting single malts the purist will at first pour a “dram” – small 1/2 to 2 ounce pour – without water or ice into the very-accepting vessel. (Preferably a glass and not the gaping mouth of the over-zealous taster.) So that is why any glassware, glass being important for tasting any liquor, is appropriate. Riedel makes a reasonably priced connoisseur Scotch tasting glass that looks like a tulip shaped wine glass. They would be nice for the tasting but for drinking we like the look and weighty feel of crystal double old fashioned glasses.

Then, as in a wine tasting, the guests are encouraged to smell, swirl and taste.

But, not like a wine tasting, we will then prompt our guests to do it all again…this time with a little water added. And, like aerating a wine, adding water to Scotch will change its taste.

I ordered 3 sets of spherical ice cube trays from MoMA (Museum of Modern Art in New York). The trays only holds 2 “large ice spheres” each of a 2 inch diameter. I had a single malt Scotch “On the Rock” at an upscale restaurant in Pasadena a few years ago and had never seen them since. The idea behind the “rock”, as opposed to the “rocks”, is that for a single malt a single large cube (or ball as the case may be) will melt slower thereby diluting the Scotch less. I don’t have enough for the tasting but just enough to show them off as a novelty to our guests.

Then, as we continue to travel Scotland Eddie will pull out his map…and we both will try and recall what our teachers said about when single malts will loose their easy smoothness and dip into peat territory. Or what I like to say: “This smells like a wet Band Aid.” Or Eddie, “Bad day at work, pour me some angry Scotch please.”

We will pair some light appetizers along with the different selections, and, most likely, take breaks so our guests can take their time, make some notes and not become too intoxicated.

But, as most tasting parties go at our humble abode…eventually it becomes a memorable evening that was centered on liquor. We have fun. We laugh. We make fun of our friends. So…we expect that our guests will leave with a little education and a long shopping list. In the meantime, feel free to suggest any Scotch, pairings…or a rich distributor that wants press.

Haven’t done a “round-up” article in a long time. That’s where I ask pals on … END_OF_DOCUMENT_TOKEN_TO_BE_REPLACED