When I was a teen, and home sick with a cold, my mother tried to make me happy with a gift of a large Hershey’s chocolate bar. I was so anxious to have it I ripped it open and took a big bite. My first thought was that something was wrong with the candy, maybe it was past its expiration date or something as it didn’t taste like chocolate. It tasted like nothing. It dawned on me later that my stuffed up nose prevented me from smelling the candy and thereby removed an important part of tasting it as well. Has that ever happened to you? If not try it as an experiment. Take a scarf and tie it over your nose, then take the scarf and…tie it over your eyes. 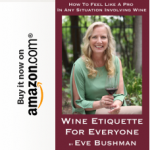 Along with the sense of taste, some of your other six senses are needed when tasting wine, and for this wine 101 article I will focus on smell and sight.

Detecting wine aroma is not just for the aficionado and/or wine writer, it’s part of the process of enjoying wine. Noting things like fruit, floral or vegetal components, spice, minerality…it is all part of your evaluation before tasting. Remove that key component and your wine may taste like an expired piece of chocolate.

I’ve read about wine taste tests where the audience was blindfolded and there were remarkable results. One study said that drinkers could not discern red wine from white wine! Hard to believe? I find this more interesting than going without a sense of smell:

“At the University of Bordeaux in 2001, Frederic Brochet conducted an experiment where he offered 57 wine experts two glasses of wine, one red and one white, and asked them their impressions. A sizable number of the experts described the red wine’s qualities in terms of its redness: that it was jammy, or displayed red fruit. The trouble was that Brochet had served them two glasses of the same white wine, and one was dyed red with a tasteless, odorless dye…. A test given by the Department of Viticulture and Enology of the University of California at Davis that asks its students a simple question: red or white? To test their tasting acumen, a series of room-temperature wines are poured into black cups. Just as with the experts in Bordeaux, the Davis students tend to fail embarrassingly at noting a difference.” (read entire article here: http://www.huffingtonpost.com/molly-laas/the-red-and-the-white_b_80308.html)

A rather scientific but easy to understand article by Jonah Lehrer, “The Subjectivity of Wine”, includes another test result of how subjective our sense of sight is, “…a middling Bordeaux (was) served it in two different bottles. One bottle was a fancy grand-cru. The other bottle was an ordinary vin du table. Despite the fact that they were actually being served the exact same wine, the experts gave the differently labeled bottles nearly opposite ratings. The grand cru was “agreeable, woody, complex, balanced and rounded,” while the vin du table was “weak, short, light, flat and faulty”. Forty experts said the wine with the fancy label was worth drinking, while only 12 said the cheap wine was (not)…”

In conclusion Lehrer wraps it up quite nicely, “What these experiments neatly demonstrate is that the taste of a wine, like the taste of everything, is not merely the sum of our inputs, and cannot be solved in a bottom-up fashion. It cannot be deduced by beginning with our simplest sensations and extrapolating upwards. When we taste a wine, we aren’t simply tasting the wine. This is because what we experience is not what we sense. Rather, experience is what happens when our senses are interpreted by our subjective brain, which brings to the moment its entire library of personal memories and idiosyncratic desires…” Read entire article here: http://scienceblogs.com/cortex/2007/11/02/the-subjectivity-of-wine

One more article on a taste test with the color of the wine hidden:

Now who wants to taste with a clogged nose or a black glass? I’ve never done the latter but I’m intrigued to try it! Anyone else?