Soroptimist International of Santa Clarita Valley held their 6th annual Bras for a Cause inside the Oaks Grille at TPC Valencia on October the 4th – the first day of clean air (no fires) and crisp weather (no sunscreen required). And that was the only part that hadn’t been meticulously planned. This year was the first time that the decorated bra event had a “theme”…

With boutique items from around the world greeting guests as they meandered up the atrium into the main event, where the Bras serving their Cause was held, guests happily shopped and chatted. 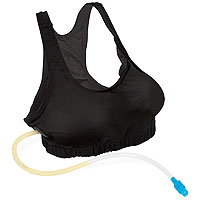 It was the first time Cheri Fleming greeted me at an event, as the Soroptimist’s Governor, her duties included volunteering time.

Then entering the main room, and seeing some wildly decorated Bras, baskets for raffle, and several displays just dedicated to appetizers, I meandered with the ladies in pink. Pink boas, to be exact, that designated the Soroptimist Bras for a Cause committee members from the guests. (Soroptimists who were not on the committee wore black and pink.)

And, for me, shopping with wine is near Nirvana. Lil Lepore, co-owner of Vino 100 Valencia, was once again on tap pouring wine, this time from around the world, which was included in our “passports”:

I happily sipped from her generous pours, came back more than once, and then gabbed and shopped like everyone else. I bid on “America Shines” because I liked the biker boots that went with, “Abroad” because it came with wine and “Ooh La La” for it’s Parisian theme.

“We got the idea from that movie, Sisterhood of the Traveling Pants,” began co-chair and club historian Lori Hollister. From your ticket looking like a passport, to the food, the items in the boutiques, and of course the bras, they were representing a ‘travel the world’ theme. “Now we want to have an annual theme as this first one was so much fun.”

Others that helped come up with this theme, ‘friends’ as they call themselves and not ‘members’ or ‘networkers’, were Vice President Donna Kreutz and Sandy Mintz.

“This is not a ‘fluffy pink event’ – men are welcome,” said Mintz. “We may be a hardworking group, but we still drink wine!” I was thinking men, wine and bras should work too…so I sent a TwitPic to Twitter and Facebook just to drive them a little wild…for next time!

“We are really pleased with the attendance and how the event is going, “Began Pam Jaffke, club recording secretary. “I think the food is amazing, and everyone is very impressed with the bras and raffle items.  The wine is pretty good too.   All in all it is a very successful event.  We plan to carry on with a theme and this venue next year and build on what we’ve accomplished.”

Before I left, $20 lighter from raffle tickets myself, I spied several ladies enjoying the weather outside. Councilmember Laurie Ender told me a story:

“Years ago, before I was on the City Council, I attended this event, bid, and won a bra with a USA theme. It had all the glitter like these, but also streamers hanging off of it. I decided that if I won that first election I would wear that bra under my clothes at my first council meeting. I won as the new ‘fit’ for the council – but the bra didn’t!”