Before the event (Wine 101 Moves Up: Leccio Gold Award-Winning Valentino Restaurant Paired with 2010 Brunello di Montalcino, Part One, 2/27/15) I received a 12-page press packet to familiarize myself with the Consortium: the history, the wine and the people. Among other things I learned: 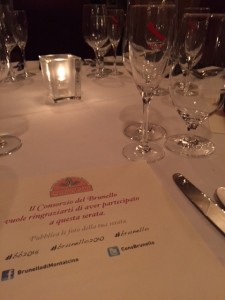 The Consorzio del Vino Brunello di Montalcino was created in 1967 right after the recognition of its D.O.C., as a free association of producers, intent on safeguarding their wine.

There are 250 producers in the Consortium that combined total 3,500 hectares of vineyards.

Brunello is obtained exclusively from Sangiovese grapes (locally known as “Brunello” grapes) grown within the territory of the Montalcino township.

The wine is currently considered the “diamond edge” of Italian production.

The main feature of Brunello is its long aging before being put on the market.

The oldest bottled Brunello is dated 1888 and kept in the cellars of the Tenuta Il Greppo.

The name Brunello can be given solely to wine produced and bottled within the township of Montalcino.

Brunello di Montalcino can undergo long aging, improving as time goes on from a minimum of 10 years up to 30 years.

While Brunello is “destined for long aging”, the Rosso di Montalcino is considered a “younger brother” with more liveliness.

Piero Selvaggio and VALENTINO have made a significant contribution to the Los Angeles restaurant scene for over forty two years, introducing authentic Italian products, wine and regional cuisine to the public and nurturing many of our most influential chefs and restaurateurs. Selvaggio was recently recognized for his achievement in Angeleno and Wine Spectator magazines in October 2012.  VALENTINO was named among the best Italian restaurants in the United States by Travel & Leisure and The Daily Meal. The restaurant was named among the thirteen restaurants that changed the Los Angeles dining scene by Zagat.comin 2012 and awarded Top 10 Romantic Restaurants, Top 10 Wine Lists, Top 10 Italian Restaurants in Los Angeles by Gayot.comin 2012. In 2013 Piero Selvaggio was one of five recipients of the prestigious Grana Padano Italian Cuisine Worldwide Awards and was also profiled for the “Lifer” interview in Eater LA about his legendary career the same year. With its intimate dining rooms, unsurpassed wine cellar, and the consummate graciousness of owner Piero Selvaggio, VALENTINO remains the favored destination for some of the best dining in Los Angeles.