I just had a very nice tasting with a female vintner new to me – and I bet new to most for making wine here and in Bordeaux? Really? Read on as all will be revealed after the tasting. 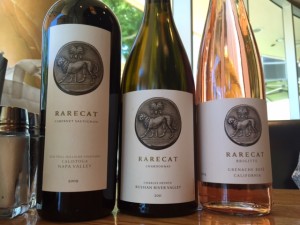 With a touch (8%) of Viognier, this Provençale style rose delivers aromatics that are bursting, a beautiful color, and what Harris called “Liquid happiness…like summer…smell of wet tar is a summer thing.” The Viognier adds minerality, and is akin to “an elegant lady that works out at the gym with a small bicep you can’t quite see but know it’s there.” Small production (not quite sold out) of 170 cases, but will do closer to 600 cases next year.

Fermented in barrel for up to 22 months, malolactic fermentation due to 2011 being a highly acidic year.

The color of golden yellow, clear.

On the nose you may find freshly churned butter, lemon grass, yellow delicious apples, a hint of anise; while on the palate you will find the perfect balance of fruit and acid, lingering oak through the finish, Meyer lemon and white pepper.

Planted in 2000 on a steep hillside vineyard (33 plus degree slope) in Napa County, Calistoga, southern facing, no direct afternoon sun, small fruit clusters, with cool wind blowing out heat in the vineyard every afternoon.

A beautiful bowl of black fruit, blueberry, plum, black pepper, black licorice, dark chocolate, wet bark will greet you on the nose; while bold dark fruits, pepper is there but softened, chewy chocolate, and a dazzling long finish on the palate.

Harris’ goal is to make small production wines, and has been ever since her early days of education in Bordeaux.

A rare beauty, a woman, is sometimes referred to as a rare cat, Harris explained. And a great wine is made unique as “they don’t reveal themselves all at once.” Harris believes that part of enjoying wine is the context – who you drink it with and when.

These things guide Harris: She wants to make beautiful wines. She doesn’t want to make a lot of wines; she wants to stay small to keep the connections valid. She’s in the business of creating great experiences, so when you visit her property and home she makes her guests feel connected and special.

Why make it a business tool? Wine brings people together and keeps them together. Harris plans on keeping her female-run business a profitable and responsible one; to that aim she wants to sell direct.

Harris is the only American woman making a wine in Bordeaux and is going through the process of making an estate-specific St. Emilion wine right now. And the Grand Cru vineyard is 200 yards from her home there. She can limit a few tiers of the usual distribution process, so Harris plans to import her wine for less cost. Produced by Rarecat for Rarecat, instead of selling her Bordeaux for up to $100 she will sell direct to her California customers for $48. She is just waiting for the federal license to come through. She is already working on the label, and it could just be another 4 to 5 months before we see the fruits of her labor.

Additional to all of this Harris spends much of her time teaching. One class, “Don’t give up the wine list” was developed as she believes that women can be cheap with themselves as we don’t spend on ourselves. Harris uses wine as a tool, helping women in business.

Harris feels “an obligation to be a great mentor to other women…now that the doors have been opened to us by other women before us.” Causes for women and children are “nearer and dearer” to Sharon’s heart.

Tastings available only by appointment at the office in St. Helena

Sharon’s love of wine started when she spent her junior year of college abroad, at the Université de Bordeaux. She was taken under the wing of the wife of the University’s president, which is how she found herself, at age 20, being taken on a personal tour of Chateau Haut Brion, producer of one of the greatest wines in the world. The tour was led by the legendary Monsieur Delmas, who kindly let her taste the renowned 1982 vintage out of the barrel, followed by the 1966. After graduating from college Sharon returned to Bordeaux and lived with the Boutarics, the famed cheese mongers at La Marche des Grands Hommes, while she worked at The St. James, a two-star restaurant, under Jean-Marie Amat, the owner and chef. That moment changed her life and sealed her interest in wine and the Bordeaux region itself. Some years later, after a career in publishing and technology, with a young family in tow, Sharon applied and was accepted to the prestigious DUAD program (the Diplome Universitaire d’Aptitude a la Degustation des Vins) offered through the Université de Bordeaux’s Oenology department. The DUAD is an intensive yearlong program that takes four years of oenology and condenses it into one compacted year: it is a technical oenology degree program taught in French. Several years later Sharon returned to the States and moved to Napa Valley. Today Sharon is one of only two women working as vintners in the Napa Valley who hold the DUAD degree. Sharon keeps her links to Bordeaux very present, maintaining a second home in Bordeaux today. As she works on the RARECAT wines, her passion extends to empowering women through wine and supporting women in the wine industry. Several years ago she formed an unusual ‘trade’ group called Wine Entre Femmes, comprised of female vintners from Napa and Bordeaux. In 2012 she established A Woman’s Palate, a company that celebrates wines by women for women. “I am lucky; I am living my passion,” Sharon says.

Visit Experience: By appointment Sharon welcomes guests into her home, where winery business takes place in a rehab’d warehouse, reached through a stylish courtyard ringed with olive trees and a firepit. The warehouse, with its enormous high ceiling and roll-up garage-style industrial chic wall-door, is an intriguing mix of family antiques (fifteenth century Spanish throne!), rare early California-era paintings, antiques and a 30’-long wooden farmhouse table. One façade of the warehouse features a graffiti art installation, painted on the spot during a happening-wine tasting in the fall of 2014 by local artist Alex Dunne, part of the What Is Beauty series (photos and more at http://www.rarecatwines.com/Story/What-is-Beauty-Art-Series ). It is in this unusual and eclectic setting with an urban modern chic vibe where Sharon shares her passion and wine knowledge.

Founded: With the release of the 2009 RARECAT Lionheart Sauvignon Blanc, Napa Valley

A Woman’s Palate: Sharon founded A Woman’s Palate in 2012 with businesswoman Susan Citron. A Woman’s Palate introduces women vintners and their stories, shares their wines with a larger audience of women and offers programs educating women about wine, including Don’t Give Up The Wine List. Vintner members are some of the most well-known and respected women winemakers in Napa and Sonoma. One recent event was a Boot Camp event in May, which included private events at Spottswoode, St. Supery and Domaine Carneros as well as a cheese class with Lassa Skinner, co-founder of Culture and a Napa cheesemonger.

Chateau des Amis is owned by Sharon Kazan Harris. Arriving in Bordeaux in 1983, Sharon studied at the Université de Bordeaux, worked for a two-star Restaurant in Bouliac and has lived in St. Emilion off and on over the years. Sharon loves to share her passion for this beautiful region and offers this villa as a home base for visitors. St. Emilion is UNESCO’s first world heritage site and one of France’s most bucolic villages. Surrounded by hillside vineyards and world-class wine chateaux, the village of St. Emilion is filled with restaurants, shops and historic buildings and shops. Chateau des Amis is the only luxury villa for rent in the village of St. Emilion. Located just outside the village’s Roman wall, this 4 bedroom villa is strolling distance to all of the local landmarks. The villa combines old world charm with modern amenities. More at http://winevillas.com/. 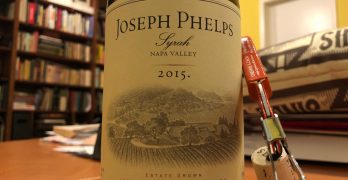