Wine writers have great…contacts…I know you thought I was going to say wine but not this time.  This time a friend sent me the most interesting resume I’ve read in a long time.  Okay, so maybe I’ve just read mine, but Colom Keating, seeking a job as in his current incarnation as a ISG certified sommelier and/or bar manager had the same qualifications also required of an international spy, Porsche dealer, computer tech, television production, fundraiser, had stop secret clearance in nuclear submarines and can translate wine bottles written in Russian, Japanese and Mandarin Chinese.

I give you five questions with Colom today, but don’t expect to receive Top Secret Clearance…

1. Colom, OMG, please tell readers, for a start, about your education.  How in the heck did you attain so much knowledge to span so many fields? 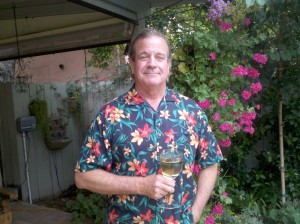 Yeah, I get that a lot!  Basically, I’ve had just one life but it has had many journeys!  I grew up in Taipei, Taiwan as my father’s company built refineries there.  I was sent to a private school and many wealthy Chinese families also sent their children there.  They knew that their children would be the business leaders of the future and they wanted them to learn English and western culture.  (Many of my former classmates and now business CEOs and government officials worldwide.)

Consequently, nearly all of my young dating experiences were with the daughters of these wealthy families.  And trust me, that’s the best way I know of to learn Mandarin Chinese!

After high school, and wanting an adventure before college, I joined the Navy.  After taking a battery of tests in basic training, they found that I had a proclivity to learn foreign languages.  “Right!”  I told them, “I speak Mandarin Chinese!”  “Right!” they said, “That’s why we’re sending you to Pensacola, Florida to learn Morse code!”  Once in Pensacola, I applied to be a Chinese Linguist again.

Following in the true tradition of military brilliance, they sent me off to Washington, D.C. to learn Russian!  Over a year of schooling later, I spoke beautiful Russian.  They then sent me to San Angelo, Texas where my knowledge of the Russian language was put through a sausage grinder in order to learn to use Russian military parlance.  In other words, the Russian equivalent of, “Roger Red Leader One!  You have a bogie on your six.  Execute lima, Charlie, lima!”  And THAT is the Russian I used for the next 4.5 years as I rode on nuclear submarines shadowing the then Soviet navy up and down the Siberian coast.  (Funny, there used to be a time when I couldn’t even admit that!)  That is where I got the top secret clearance.

But, you have to catch submarines somewhere so I was sent to Japan for 4.5 years.  That was my home base in Misawa and Tokyo, Japan. (I’m the only idiot I knew who actually had a CAR in Tokyo!)  Remembering how well I learned Chinese from Chinese women, I thought why not try it again with Japanese ones?  So, I did and THAT is where I picked up my Japanese.  Wonderful times!  The main reason I rarely, rarely go on a pub crawl anymore is that after partying all night for years in Tokyo, everything else just seems dull.

Moving on, I got out of the Navy and went to the University of Texas at Austin where I majored in Radio Television & Film.  I know people laugh at such degrees but I actually worked in radio (I was a classic rock DJ and have a syndicated comedy radio show to this day), I worked in television, (as a writer, director, producer and actor), and film (first as a crew member before I moved into acting.  Google my name, its all there).

Show business, for the most part, is a young person’s game.  I had been a segment producer for NBC, FOX and ABC but I, along with several others, were laid off after 9/11 and I was adrift at 47 years old.

Not knowing what to do, I tried selling cars.  I became a Corvette specialist at a Chevrolet dealership in Pasadena and decided that the real money in the car business was to found in high end cars and I needed to go where the money was.  Hence, Beverly Hills Porsche was my next place of employment.  The money was good but the hours were dreadful and top that off with a Pasadena to Beverly Hills commute everyday and I was exhausted.  No amount of money was worth killing myself.  So I quit.

I tried two other jobs before realizing that I had always liked wine.  Why not try working in a wine place of some sort?  So, off to Heritage Wine Company in Pasadena I went starting as basically, a stock boy, and worked my way up to manager.  I also began attending classes with the International Sommelier Guild (ISG) and, after taking two years to do it, I graduated from their Sommelier Diploma Program in July.  (There’s only a little over 900 worldwide who have done this).  I guess they liked me because they had me go to Canada to be certified as an ISG instructor and I will be teaching in the greater Los Angeles area starting in October.

I became a victim of the Bad Economy and I was laid off at Heritage Wine Company at the end of July.  I don’t know if the place will make it and frankly, I don’t care.  It’s time to move forward to my next adventure.

There are lots of little holes in the story above but I figured that gives you an idea of how I ended up where I am.  This is what I plan to do for the rest of my life —  plus, I have plans to have a wine store/bar myself.  I never knew I had such a passion for wine and talking to people about it.  I just love the wine/hospitality business!

2.  Did your sommelier education ever come in handy with your other jobs?  I realize that your wine career may have come later, but I was thinking that your interest may have overlapped?

When I started in the wine business, I thought I knew a little bit about wine and I was absolutely correct; I knew a VERY little bit about wine!  Looking back, before I took the ISG classes, I was dangerously inept when it came to winespeak!  Why the manger of that place ever hired me I’ll never know but he did it on the spot after one interview.

3.  We have many non-profits running fundraisers with wine in Santa Clarita.  I consult from time to time on how to do it, etc.  Did your work for the Pasadena Senior Center ever involve any wine events?  Any advice?

I was a fundraiser for the Pasadena Senior Center for a little over a year.  It was more or less I job I took because I had to do something to pay the bills and it appeared out of nowhere.  Plus I liked the guy who asked me to come on board.

I now say that there is a special place in Heaven for fundraisers!  Lord, it was desperately difficult work and in this economy, it’s even more difficult.  I’ve heard horror stories from friends who still do it.

We never had any wine fundraisers but we did pour wine at fundraising events at the Senior Center.  Looking back, most of it was bad wine, real dog stranglers!  I remember being given two cases of Crane Lake Sauvignon Blanc to give out as thank you gifts for people who had donated cash.  I drove all over Pasadena dropping them off at people’s offices.  I had one bottle left so I took it home.  That night when I opened it up, I thought I had swallowed Drano!  I called all of the people I had given Crane Lake to the next day to apologize.  Being a non-profit, however, I couldn’t replace it!  Perfectly ghastly “wine.”

My advice to fundraisers is try to do very little of it over the phone or e-mail.  It requires a lot of footwork and face-to-face meetings.  I raised over $180,00 in one year for the Pasadena Senior Center making me their number one raiser.  I was very proud of that!  It’s a great cause.

4.  You’re currently available for a job in the wine field.  In my own career I do tend to prefer the expertise of a certified sommelier from the wine stores and the wine bars I frequent.  Can you tell us why it’s important to employ someone wit your knowledge?

Well, would you have your car worked on by someone who didn’t know anything about cars?  Would you hire an interior decorator who knew nothing about interior decorating?  I will not name names here, but I have been in some pretty well-known establishments where I was appalled at the employee’s total lack of knowledge of wine!  One place, I was talking to a young lady who called herself the store sommelier who didn’t know the difference between a left bank and right bank Bordeaux.  There’s no excuse for that if your business is to ever be taken seriously  —  or more importantly, succeed!

One of my favorite situations is when a customer comes up to me, frightened and meek, and apologizes for not knowing anything about wine but he/she needs a wine for a  dinner that night.  I love guiding them through the process of simply choosing a good wine and it makes my day when they come back to tell me how well it went with the dinner.

Also, in today’s economy, people are grateful when you can show them a marvelous wine that sells for under $20.00; I tell them just because a wine is expensive doesn’t mean it will taste good, but it SHOULD.  Still, there are perfectly enjoyable wines that one doesn’t need to mortgage the house to enjoy.

5.  Lastly, you will be teaching some of what you know to others, please tell us about your upcoming class schedule and how readers can get in touch with you.

Yes!  My next ISG class begins Sunday, October 3rd.  The ISG has three Sommelier levels.  Level I, II and the Diploma level.  I will be teaching Levels I & II.  It is an eight week course and upon successful completion of the course, students will not only have a valuable skill to carry with them into the work force (and bragging rights), but they will also be eligible to enroll in the ISG’s Sommelier Diploma Program.  For more information, the ISG website is www.internationalsommelier.com.  I can also be reached at ckeating@internationalsommlier.com or colomkeating.com (where one can see my resume).  I’d love to see some of your readers there.  Not only will they learn a lot but we also have a bunch of fun!

Who likes sparkling wine? The ultimate wine for celebration, and celebrated as a … END_OF_DOCUMENT_TOKEN_TO_BE_REPLACED