“I follow tastemakers in Los Angeles, San Francisco, and New York to try new ideas here,” said Brune, whose barrel-aged cocktails include a Boulevardier (whiskey, sweet vermouth, Campari) that mellows and melds in a five-liter barrel behind the bar for two months. “Barrel-aged cocktails are so smooth. After a while in barrel, some of the oxygen evaporates, kills the burn, and makes the drink darker and more viscous.” The resulting Boulevardier shows seamless toasty, earthy, and nutty notes from time in barrel, served in a lowball glass over one block of ice and garnished with a ribbon of orange peel. 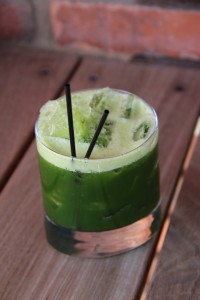 “I call him the mad scientist,” said Managing Partner Carole MacDonal, who launched La Cosecha with her husband and Executive Chef, Santos MacDonal. “Andrew has a passion for developing new cocktails and a sixth sense about what goes with what. Everything he does is always in balance – and he loves working with customers to devise just the right drink to their taste.”

Brune also makes a point of stocking the bar with products most establishments in the area don’t, such as Samaroli “Evolution,” the rare Italian-bottled Scotch whiskey blended from single malts from countless distilleries that span from 10 to over 40 years aged. “I try to target smaller, family-owned distilleries instead of the mainstream ones,” he said. His interest in small family producers extends to local distillery, RE:FIND, with whom he will team up to create a barrel-aged cocktail to be bottled and sold under the RE:FIND label, released later this summer. 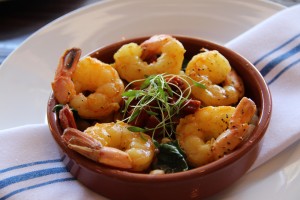 Centering on the flavors of Spain and Latin America, La Cosecha Bar + Restaurant in Paso Robles is the bold creation of celebrated chef, Santos MacDonal. After establishing Paso Robles Italian favorite, Il Cortile Ristorante, Chef Santos was inspired by his own Honduran heritage and the abundance of fresh Central Coast ingredients to bring La Cosecha to life. Along with his brother and longtime collaborator, Jorge MacDonal, and wife and Managing Partner, Carole MacDonal, Chef Santos developed La Cosecha’s menu to be fiercely local while also making use of specialty herbs and spices specific to regional Latin cuisine for a taste that’s both completely authentic and totally unique. Open late, La Cosecha also features a craft cocktail menu designed to make use of garden-fresh ingredients and artisanal spirits. La Cosecha is located at 835 12th Street, Suite A, on Paso Robles’ famed City Park. Please visit www.LaCosechaBR.com or call 805.237.0019 for more information.

A few weeks ago I received an email from Naushad Huda, the “Voice of Modern Wine … END_OF_DOCUMENT_TOKEN_TO_BE_REPLACED