The invitation from Wolf Creek Brewery that got my attention: Vlad from Truffles ‘N’ Toffee has returned! He’s brought 7 chocolate truffles to be paired with some of your favorites here at Wolf Creek including our Howlin’ Hefe with Bananas Foster Crunch and Over the Moon Stout with a Triple Threat Dark Chocolate...purchase tickets in the Tasting Room or email Laina@wolfcreekbrewery.com 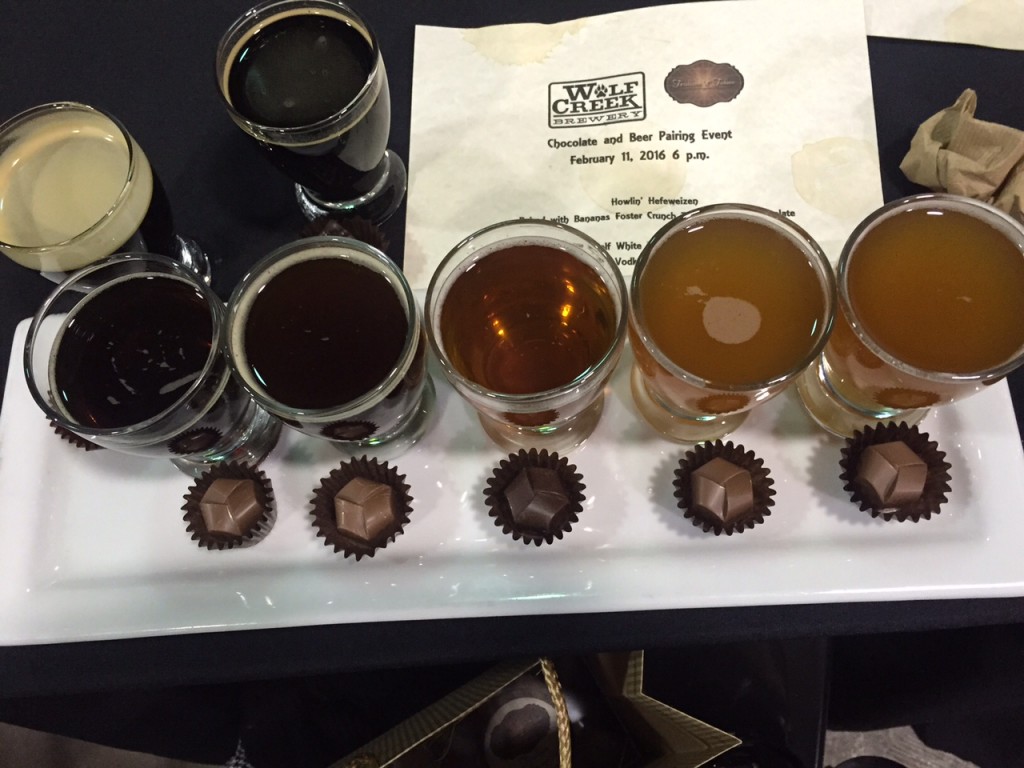 You will be having “Vlad’s amazing chocolates paired with Rob’s amazing beers” Wolf Creek Brewery and restaurant co-owner Laina McFerren began. “See Vlad’s step-by-step instructions on your tables…Vlad will talk about chocolate while Rob talks about the beer. What I love about Vlad is that he is just as passionate about chocolate as Rob is about beer.”

“We’re so excited about what we’re presenting,” Vladimir said. “These are new yet-to-be released chocolates. Please, have a lot of fun. And know that all the chocolate is gluten free but the beer is not. Now…don’t eat all of the chocolate before the beer comes, or dink all the beer before the chocolate comes.”

The instructions (which can be seen in this 1-minute YouTube along with the other shenanigans) are as follows:

#2 Take a bite of half of your truffle, and chew it a couple of times without swallowing.

#3 Take a sip of your beer to mix and swallow.

Tasting B and C

Tasting the beer alone I got hit by a lot of banana. This is made in the style of German wheat beer, unfiltered, German yeast strain and hops with filtered Valencia water, according to Rob. Besides the banana, Rob said apricot could also be found. Together…I thought that the sweetness of the chocolate, and caramel notes, grew with the beer. Very cool.

Aromas of the beer alone was like a freshly sliced orange was popped in my glass, like the way a bottle of Corona is served with a lemon wedge in its neck. Rob said it’s half wheat and half barley malts (that combo is what gives it the white name) with lots of citrusy hops, then they add in real blood orange at the end. The beer was tangy, dry, and did have great citrus. With the chocolate it was a genius blend of “orange peel” (according to Vlad), cigarette (from the IPA according to the beer expert sitting on my left) and tangy cheese. The goat cheese is from local Soledad Goats farm. This was my fave pairing so far.

The beer on its own was all malted barley and smoke, well done. Rob said it had more malt, and more balance than some other IPAs, and more citrus and hops that he thought would go well with the lemon in the truffle. The candy was made with real Meyer lemon that Vladimir had zested himself. Together both the chocolate and the beer became creamier.

Yummy beer, nice and dark, with strong notes of coffee grounds and chocolate. Rob said it’s a dark wheat beer, some banana, and that traditionally Dunkelweizens are made in Germany. Lots of creamy caramel in the candy came out with the beer.

The beer was our darkest yet with notes of prunes and black tea. Rob said cinnamon, nutmeg and vanilla were added. “A dessert all by itself” said my tasting mate. Vlad told us to expect an explosive cinnamon finish on the chocolate. The chocolate was “the icing on the cake” another guest remarked.

The beer tasted like Italian espresso, 90% cacao chocolate, bitter. Rob said they’ve been doing this one for four years, a basic dark IPA with the dark malts. The chocolate on its own is my second favorite after the goat cheese vodka truffle.  Together it’s like candy, or even better: a chocolate croissant and espresso. Vlad caramelizes and then grinds the hazelnuts himself. It’s only hazelnut and sugar to make it into a praline. Vlad said he was working on a hazelnut butter next.

Over the Moon Stout on Nitro

The beer, dark black coal colored, “Texas Tea”, chewy and akin to a double espresso. Rob said he used Intelligentsia coffee, oatmeal, lactose and organic cacao beans. Vlad said that his chocolate was made with three different alcohols but he wouldn’t tell us what they are, they are proprietary, he describes it as having ” big, coffee notes with a Baileys and cream like finish.” We were guessing Baileys, Kahlua and either a Port or red wine.