Papera Ranch – the vines were planted in 1934 by Celestino Papera. Head-trained and dry farmed, the vineyard is mostly Zinfandel with Carignane, Syrah, Petite Sirah and Valdiguie. Stuart Coulson purchased the property in 2007 and he and Chris Bowland of Bowland Vineyard Management have brought the property back to its former glory. Fruit is sold to Bedrock Wine Company, Carlisle Winery & Vineyards and William Selyem.

Belloni Vineyard – planted in the early 20th Century by the Catabriga family, the vineyard in planted to Zinfandel, Petite Sirah, Carignane, Alicante Bouschet and Mataro. The vineyard was eventually split into three parcels and passed on to the daughters. One of the parcels was purchased by Ricardo Belloni in 1971, who passed away in 1997. Ricardo’s widow Natalia manages the vineyard; her son-in-law Wil Dixon met us at the property with Joel Peterson of Ravenswood Winery, which has been producing a vineyard-designated Zinfandel from Belloni since 1991. 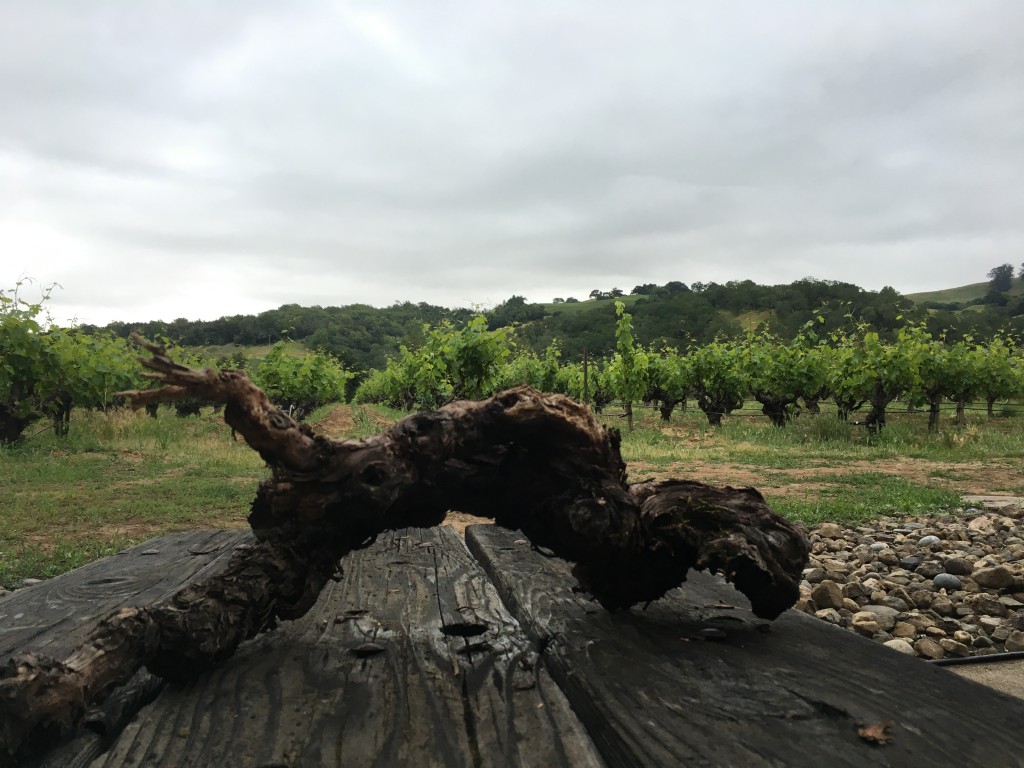 Limerick Lane Vineyard – five acres of the original 1910 planting of this vineyard are still in production. Mostly Zinfandel, but also with Peloursin, Negrette and Syrah, the vineyard was planted by the Del Fava family and later sold to the Collins brothers in 1977. Jake Bilbro acquired the property and winery in 2011. Most of the fruit is used by Limerick Lane Cellars but some is sold to Bedrock, Carlisle, Robert Biale Winery, Matthiasson and Siduri.

Carlisle Vineyard – okay, I admit it – this was the vineyard visit I was most looking forward to this day, and by the luck of the draw for our bus, it was the last one. And I am in no way throwing any shade at the other vineyards we toured as they are all incredible. But winemaker Mike Officer has probably been the single greatest influence on my own love of old vines with his Syrahs and Zins from California’s great old vineyards. So, to visit the home vineyard owned by him and wife Kendall was truly a treat. Please pardon my fanboy digression. Back to some details…the vineyard was planted in 1927 by Alcide Pelletti and consists mainly of Zinfandel but also has Petite Sirah, Alicante Bouschet, Grand Noir de la Calmette, Tempranillo, Peloursin and 34[!] other varieties, including 10 whites.

The tour was over and it was time to head back to Limerick Lane Cellars. We’d had a long day and we were not only hungry but very thirsty from learning all about these great old vineyards. Back at the winery, a delicious family style dinner was waiting for us, catered by Bay Laurel Culinary along with wine – lots and lots of wine.

Wines were available not only from the vineyards we visited but from many others as well. Wineries that generously shared the fruits of their labors included…

I apologize for any I missed.

I’m not going to pick any favorites here, but a few real treats for me were the 1995 and 1996 Ravensood Belloni Vineyard Zinfandels being poured by Joel Peterson, the Y Rousseau Columbard made from 40+ year old vines, and the Zinfandels from Matthiasson and Novy – I do not get to taste their wines often. The other wines were outstanding as well, and having the opportunity to taste them in this setting just added to the experience.

And speaking of treats, a real highlight of this event is the socializing with not only fellow lovers of old vines but also with the winemakers and growers. If you thought I was getting a little fanboyish earlier writing about the Officers, imagine how I felt hanging out with not only them but with Tegan Passalacqua of Turley, Morgan Twain-Peterson of Bedrock, and Jake Bilbro of Limerick Lane. Not to mention I had the pleasure to meet and chat with Tres Goetting of Biale, Adam Lee of Novy and Yannick Rousseau of Y Rousseau.

Bedrock, Carlisle, Ridge, Biale and Turley teamed up to blend together a 2013 HVS wine from the Bedrock Vineyard. Three-packs of this wine were available for purchase, giving all of us a great souvenir of the evening.

Thank you to all the people who made this happen, especially the founders of this organization, as well as Jake Bilbo of Limerick Lane for hosting and giving up his license to sell wine for a day [crazy rules]. Kudos to Mike Dildine for putting together another great event. Thanks also to the Historic Vineyard Society for providing detailed information about the vineyards, which I used in these articles [although any errors are mine alone]. And special “thank yous” to my wife Karen for giving up her Mother’s Day weekend and to my own Mother for not making me feel guilty about not seeing her this year on Mother’s Day.