L.A. Weekly is proud to present the final lineup for Sips & Sweets 2016! In its third year, our now annual holiday party will feature 21 of the city’s top bakers and 24 of LA’s most respected mixologists. Join us Friday, December 2nd from 8 p.m. to 11 p.m. and sample delicious confections, sip on handcrafted cocktails and shop for amazing holiday gifts and trinkets. Curated by the L.A. Weekly’s own food critic Besha Rodell and food editor Katherine Spiers, this eating, drinking and shopping extravaganza is one not to be missed.

General Admission tickets include: entry into the event and museum, unlimited food samples from over 20 LA pastry chefs, beer, wine and artisanal cocktail samples from over 20 mixologists as well as access to our handcrafted vendor village with 20+ vendors. VIP Admission ticket includes: all of the General Admission perks plus 1 hour early entry into the event and a special VIP Gift Bag.

A portion of proceeds from the event will be donated to Food Forward. Food Forward rescues fresh local produce that would otherwise go to waste, connecting this abundance with people in need, and inspiring others to do the same. 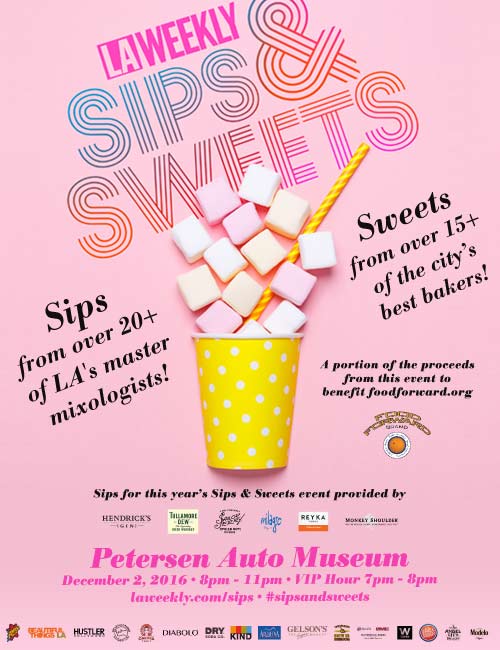