Recently, thanks mainly to the efforts of my sister-in-law Elizabeth (Liz) Haig, we attended the 4th Annual South Bay Beer & Wine Festival. Our spouses Karen and Brian tagged along.

Since Liz went to all this trouble. I’d like to share her thoughts on the event and introduce you all to the person who has really been like my sister for about half [geez!] of my life. 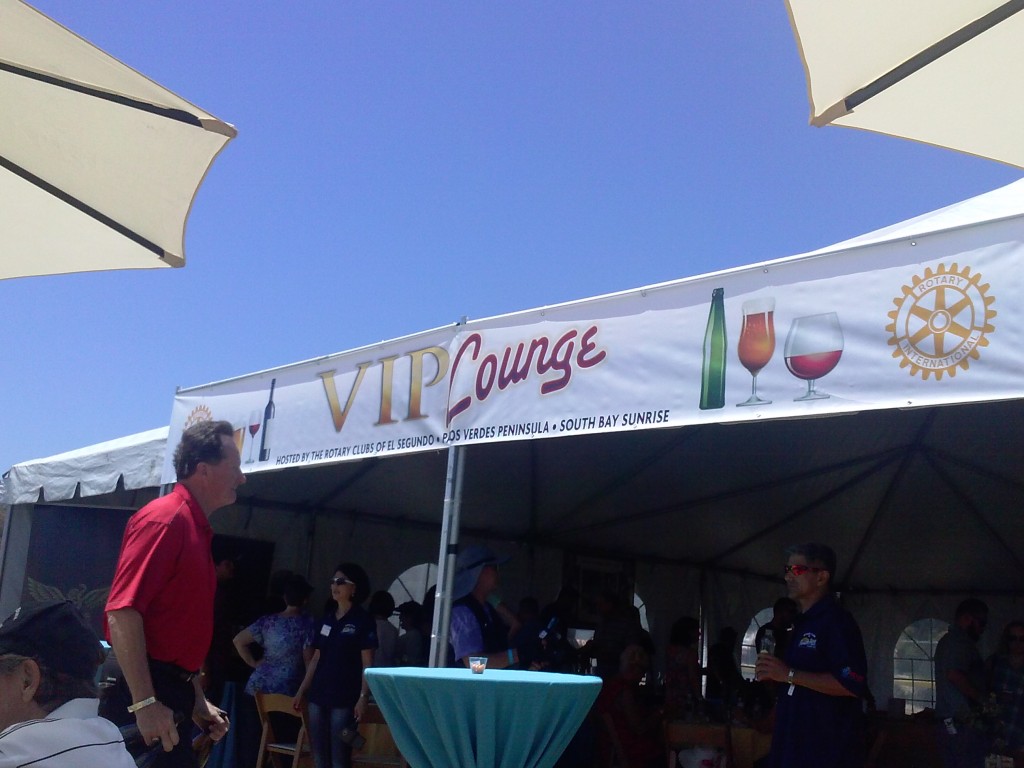 The South Bay Beer and Wine Festival ​​in Rolling Hills Estates is a fundraiser for the El Segundo, Palos Verdes Peninsula and South Bay Sunrise Rotary clubs who volunteer and contribute to many worthwhile charities in our community.

It was a sold out event with nearly 1,300 guests. There were about 30 breweries and almost 20 wineries scheduled to pour and many local restaurants and other vendors serving up great food. I enjoyed several tastings that I thought I’d comment on a few that I really liked. I couldn’t get to all of them.

Kinship Winery in Paso Robles had a very nice Pinot Noir, it was light and refreshing and not too sweet.  The Chardonnay was mild and had a fruity after taste. A portion of their proceeds goes towards helping children in Guatemala.

I tasted a flavored cognac, vodka and fruit juice blend called Mascarade with club soda and a mint leaf.  It was very good and reminded me of a Mai Tai.  And I really like Mai Tais.

Tito’s Vodka was serving up cool, refreshing cocktails and since it was extremely hot, it helped cool things down.

As for the beers, there were so many to choose from with a wide variety to sample.  Absolution, Arts District, Knee Deep, RIPP Beer, Ironfire, Mother Earth Breweries and Scholb Premium Ales had some interesting new beers.

Live music from the band, Detour, who played pop rock classics made us feel like dancing and really added to the atmosphere.  I would definitely go again next year!

I have a few more things to add.

On the day of the event [May 21st] we were experiencing unseasonably warm weather, which made it a perfect day to get out of the Santa Clarita Valley and head down to the South Bay. It was somewhat warm down there too [although not like here] so it was a perfect day to focus on beer, which is what I did.

I had no idea there was such a craft beer movement going on in the South Bay. That area was well represented as well as other parts of LA and beyond.

Here were some of my favorites…

Iron Triangle’s Dark Ale got my nod a second time [see my Masters of Taste article] for my favorite beer.

Also, Phantom Carriage gave me a good education on the purposeful use of brettanomyces in beer, which is usually a no-no for wine. They are definitely worth a trip to Carson to check out.

All in all, a nice way to spend a warm day out of the SCV.

Did you miss me? My blogs over the past two weeks were “Vintage Eve” articles as … END_OF_DOCUMENT_TOKEN_TO_BE_REPLACED