I realize that the drive from Santa Clarita to Newport Beach is a little daunting. In fact, on a weekday it took almost as long to get there as it does to get to Paso Robles. But once there, Karen and I were presented the opportunity to taste with representatives of 35 Paso Robles wineries… 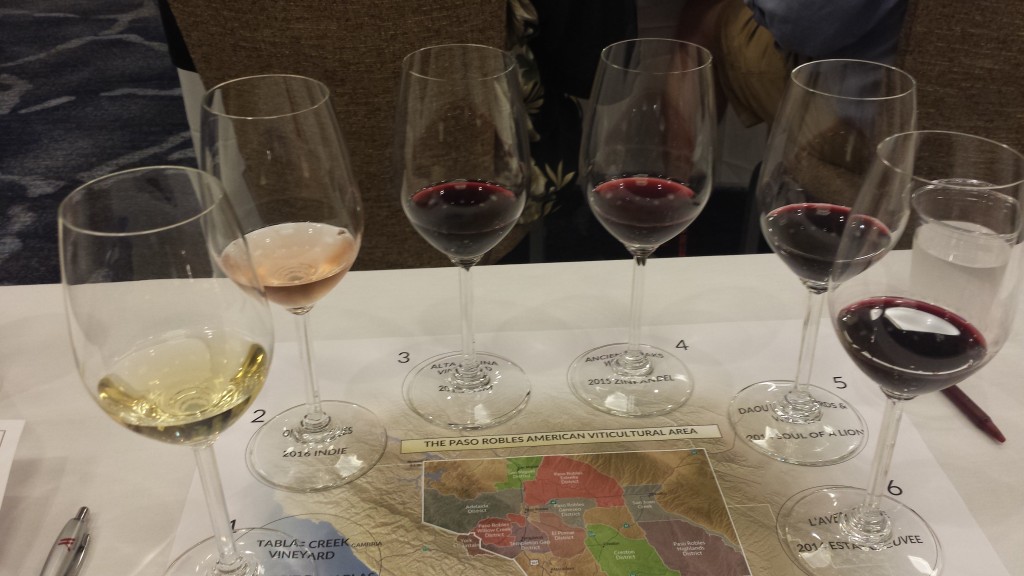 Maybe if you spent a week in Paso, you’d be able to visit all of these. Fortunately, the Paso Robles Wine Country Alliance has a traveling roadshow.

And admittedly, I did have another motive.

Prior to the start of the trade and media portion of the tasting, we were invited to attend a seminar on Paso Robles wine presented by Peter Neptune, MS. For me, this was enough to justify the schlep to Newport Beach even without the grand tasting afterwards.

Master Sommelier Peter Neptune is a world renowned wine expert and educator. I’ve often wanted to attend one of his seminars but never had the chance. I was not going to pass up this opportunity.

We tasted through six wines from wineries that are representative of Paso Robles Wine Country today. Mr. Neptune offered his thoughts on these wines, as well as how Paso has developed over the last couple of decades.

[Yes, I realize that I often bemoan the loss of “old” Paso, as recently as a couple of weeks ago. But I do understand that, overall, the wines are better for a host of reasons. Still, 20 years ago, the wines – and winemakers – were special enough to make us fall in love with the region.]

The wines we tasted during the seminar were [with some of Mr. Neptune’s comments noted as PN]…

We first tasted the 2014 Espirt de Tablas Blanc from Tablas Creek Vineyard. A blend of Roussanne, Grenache Blanc and Picpoul Blanc, PN said that that this is one of his favorite whites from Paso Robles.

Then, we moved on to the 2016 Indie Rose of Tempranillo from ONX. PN referred to the wine’s “sunset” color and that it reminded him of a “creamsicle” [in a good way].

Time for the reds, so we started with the 2013 Grenache, Mourvedre and Syrah blend from Alta Colina, which PN referred to as a “versatile” wine.

A Paso Robles tasting wouldn’t be complete without a Zinfandel in the mix, so we tasted the 2015 Zinfandel from Ancient Peaks, described with the highly technical word of “yummy” by PN.

Then we had the opportunity to taste two of Paso’s super-premium wines – the 2014 Soul of a Lion from Daou and the 2014 Estate Cuvee from L’Aventure. The Daou was a blend of Cabernet Sauvignon, Cabernet Franc and Petit Verdot, which PN referred to as “gorgeous” and the L’Aventure blend of Cabernet Sauvignon, Syrah and Petit Verdot was noted by PN to have “tremendous power and concentration”.

We also discussed the 11 Sub-AVAs within the Paso Robles AVA [American Viticultural Area] and how wineries were labeling their bottles with their specific AVA along with the trend toward estate wines and organic and biodynamic farming.

Peter Neptune’s passion for wine really showed up in the class. His speaking style made a fun seminar even better.

After the seminar we stayed around awhile to taste some of the wines being poured at the Grand Tasting before heading back up to the Santa Clarita Valley. Next week, I’ll let you know our favorites.

Did you miss me? My blogs over the past two weeks were “Vintage Eve” articles as … END_OF_DOCUMENT_TOKEN_TO_BE_REPLACED