The Moral Thinking of the Wizard 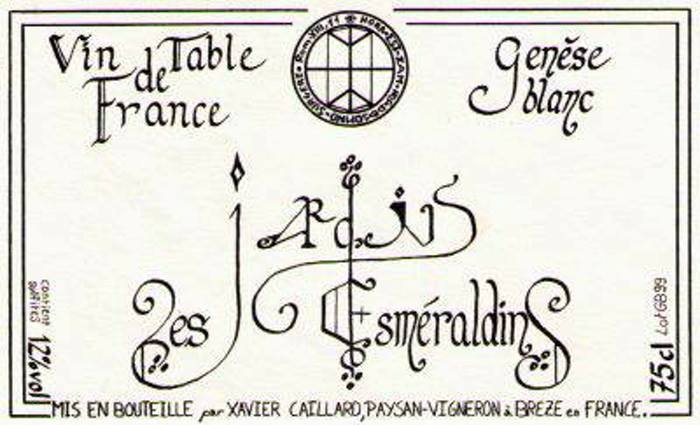 There is a little more magic to mention: the invisible cellar, the shuttered chateau. But I do not want to emphasize this. Xavier does not play any of this up: like the vineyards, all of this disappears. There is no show: only wine. He does not even make a show of his methods; he never mentions his own devotion; he never draws distinctions between his way of working and his neighbors’. He does not celebrate or elevate what he does; he is utterly matter of fact. He never mentions “purity” or any other value. His only point of pride, if I read him right, is his wine’s relation to time. His only theory, insofar as I could grasp, is related to what he calls “matière”– “matter.” His labels have alchemical references (see photo); I think that he means something old-fashioned and metaphysical by this. He does not just mean “matter” or even something like information. He talks about his farming being devoted to translating matter from the field (not just the soil) to the grapes, and his pressing being devoted to translating the matter from the grapes to the juice. The density of this wine is due to this attention to matter– and also the complexity, I think. But this means that “matière” is not just some concentration of molecules, but some kind of system, with architecture, proportion, interrelation. For what else is complexity? His matter, I think, is something more like spirit or soul– not necessarily in the Christian sense, but in a way that Aristotle would understand.

Soul, of course, brings up the question of spirituality and devotion. I thought of his pressing all night and then getting up the morning to harvest fruit. I thought how differently we work at Scholium. For us winemaking is intensely intellectual and sensual– you know that– but it is also intensely athletic in a way that we love. We pride ourselves in a very American way on how fast we can get the job done well. One cannot help but call Xavier’s work “spiritual,” and I mean this only in a good way, not as a stereotype or a caricature. You could only call our work “spiritual” in a very narrow but perhaps equally beautiful way: the spirituality of Huck Finn, a very American spirituality.

It was wonderful and important for me to encounter this difference and to reflect on it.

Would we– me, Alex, Brenna, Koko, would any of us make better wines if we sat with the press all night? I don’t think so– but for us to do that and not simply be aping a quiet wizard in the Loire, for us to do that, we would have to change to our deepest metaphysical core. In this respect, what this amazing visit emphasized is that, in spite of my 1000 careful words…winemaking is not fundamentally about technique, protocol, regime or even about care. It is about decisions and stances that reach to one’s roots.

These two excellent reports by Betrand Celce are very helpful, especially on farming, and contain amazing details and photographs about Xavier’s caves. I tried not to rely on them at all and to base my report only on our conversation, but I know that I was influenced (and informed) by having read these. It is also worth noting how far ahead of the curve Betrand was: they date from 2011.

A note on Xavier’s labels: The typography is mostly fantastic (except for mise-en-bouteille information) and involves some straightforward imitations of Roman epigraphy in a circle at the top. (We will read this in a moment.) The rest of the words are written in the hand-drawn letters of a fantastic alphabet, the majority of which interweave alchemical symbols with the Modern Latin letters. The words in the circle are a quotation from the Latin Vulgate translation of Paul’s Epistle to the Romans: hora est jam nos de somno surgere — “now is the time to wake up from our slumber.” The allusions to alchemy are very interesting to me and not surprising. What is more unexpected is a quotation from the Vulgate. Xavier’s thinking is simple in its commitment and focus; but complex in what you might call its metaphysical underpinnings. Pay attention to every gesture.

Michael Perlis here again. A big thank you to Abe Schoener for allowing me to share this with Eve’s Wine 101 readers. And a thank you to Eve Bushman too for indulging my wish to do so.

It is finally time to move our focus to Northern California, so now we can write … END_OF_DOCUMENT_TOKEN_TO_BE_REPLACED