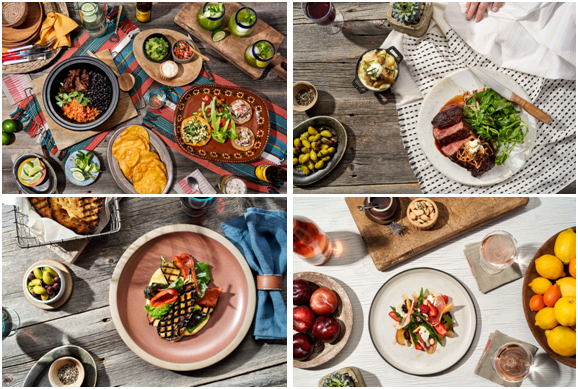 This year concert-goers can skip the line before the concert and use the Hollywood Bowl Food + Wine mobile app and choose pizzas, barbecue, bánh mi, hot dogs, and popcorn, and easily pick up their picnic on the way to their seats. For the highly praised Supper in Your Seats, Suzanne adds her Susanita’s Carnitas Feast for Two as well as a new picnic box, the Maple Drive, slow-roasted prime beef tenderloin served with Early Girl tomato salad, roasted potatoes, wild mushrooms and a caramel chocolate brownie. For a grab-and-go option, Alex’s Veggie Sandwich – a tribute to Suzanne’s daughter Alex – will be found at all Marketplace venues.

Returning for the 2018 season is the well-received Winemaker Wednesdays series, an eight-week program of complimentary wine tastings at the Plaza Marketplace from guest winemakers hand selected by Caroline Styne.

Highlights of the 2018 Hollywood Bowl Food + Wine portfolio include:

Picnic Boxes – All five of Suzanne Goin’s complete picnic boxes can be pre-ordered a day before a concert and picked up at the Plaza Marketplace or delivered to your box seats. Menu Highlight: This year Suzanne adds The Maple Drive – peppered beef tenderloin with horseradish cream; early girl tomato salad with red onion and basil pesto; fingerling potatoes and wild mushrooms with salsa verde; triple crème cheese with dried figs and walnuts; and a caramel chocolate brownie.

Street Food and Snacks – Authentic street foods can be found throughout the grounds of the Hollywood Bowl, including a diverse range of multi-cultural foods of Los Angeles, from street tacos, gourmet pizzas, specialty hot dogs, BBQ, bánh mì, sandwiches, and nachos, to confections and signature desserts at the Sweet Shop.

Lucques at the Circle – This is a full-service dining experience for subscribers of the Pool Circle, showcasing a seasonal made-to-order menu and exceptional wine list styled from the award-winning cuisine of Lucques. Menu Highlight: Tunisian grilled halibut with couscous, summer squash, harissa, and pistachio yogurt.

Please visit hollywoodbowl.com/foodandwine for more information about the food and wine experiences available at the Hollywood Bowl.

The Los Angeles Philharmonic Association, under the vibrant leadership of Music Director & Artistic Director Gustavo Dudamel, presents an inspiring array of music from all genres – orchestral, chamber and Baroque music, organ and celebrity recitals, new music, jazz, world music and pop – at two of L.A.’s iconic venues, Walt Disney Concert Hall (www.laphil.com) and the Hollywood Bowl (www.hollywoodbowl.com). The LA Phil’s season extends from September through June at Walt Disney Concert Hall, and throughout the summer at the Hollywood Bowl. With the preeminent Los Angeles Philharmonic at the foundation of its offerings, the LA Phil aims to enrich and transform lives through music, with a robust mix of artistic, education and community programs.

One of the largest natural amphitheaters in the world, with a seating capacity of nearly 18,000, the Hollywood Bowl has been the summer home of the Los Angeles Philharmonic since its official opening in 1922 and plays host to the finest artists from all genres of music, offering something for everyone. It remains one of the best deals anywhere in Los Angeles; to this day, $1 buys a seat at the top of the Bowl for many classical and jazz performances. In February 2018, the Hollywood Bowl was named Best Major Outdoor Concert Venue for the 14th year in a row at the 29th Annual Pollstar Awards and was awarded the Top Amphitheater prize at the 2017 Billboard Touring Awards. For millions of music lovers across Southern California, the Hollywood Bowl is synonymous with summer.

With the opening of Lucques, their flagship restaurant, in 1998, James Beard award-winning Chef/Author Suzanne Goin and James Beard award-winning Restaurateur Caroline Styne planted the seeds for The Lucques Group, a Los Angeles hospitality company that comprises two other fine dining restaurants – a.o.c. and Tavern – and four marketplace restaurants – The Larder at Maple Drive, The Larder at Burton Way, The Larder at Tavern, and The Larder at Tavern at the Tom Bradley International Terminal at LAX. Along with these culinary enterprises, the company also operates Lucques Catering, the Larder Baking Company and, since 2016, comprehensive food services for the Hollywood Bowl. The Lucques Group is dedicated to seasonally influenced cooking and focuses on sourcing local, organic produce from which Goin creates soulful dishes that are bold in flavor, vibrant, layered and complex.

Sodexo Sports & Leisure, a division of Sodexo, Inc., is a premier provider to cultural destinations and event venues around the world and in the U.S., including The Jules Verne restaurant at the Eiffel Tower, the Museum of Science and Industry in Chicago, Space Center Houston, the Smithsonian’s National Zoo, and the Detroit Institute of Art. Sodexo, Inc. is headquartered in Gaithersburg, MD, and funds all administrative costs for the independent and charitable Sodexo Foundation – granting more than $29 million since 1999 to end childhood hunger in America. Visit the corporate blog at sodexoinsights.com.

Haven’t done a “round-up” article in a long time. That’s where I ask pals on … END_OF_DOCUMENT_TOKEN_TO_BE_REPLACED