MONTREAL — The International Sommelier Association (ASI) is pleased to announce MS Pier-Alexis Soliére as the winner of its first continental competition of the year, Best Sommelier of the Americas. Soliére won a dramatic final over Argentina’s Martin Bruno, who came in second, and Canada’s Carl Villeneuve Lepage, who took third place. The Final was observed by dozens of people in the Marie Gérin Lajoie Theater of Montreal and followed by thousands of sommeliers and aficionados around the world via live streaming. 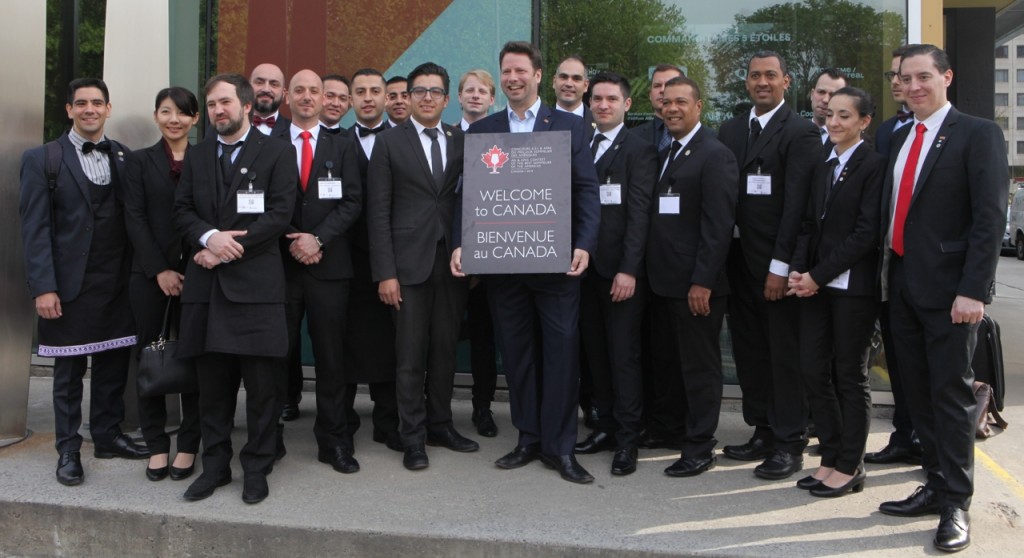 The event was organized by ASI in conjunction with the Alianza Panamericana de Sommeliers (APAS) and the Canadian Association of Professional Sommeliers (CAPS). This three-day competition started on Tuesday with 20 competitors from 10 countries and was an idyllic launchpad for ASI’s new longterm vision.

“The responsibilities of a modern sommelier are today seen as going far beyond merely serving wines,” says ASI President Andres Rosberg. “We at ASI aim to elevate the position of sommelier within the industry and increase global awareness of how special and important this field is to consumers.”

Founded in Reims (France) in 1969, ASI is an international non-profit organization with over 30,000 members from national sommelier associations spanning almost 60  countries. It is the world’s largest organizer of sommelier competitions, running periodical, continental and global contests. Ongoing objectives include promoting the culture of wine and bringing sommeliers together from all over the world as well as introducing and developing sommellerie in countries where it does not yet exist. The organization as a whole strives to enhance the métier of the sommelier and generate more awareness among consumers and restaurateurs alike.

ASI President Andrés Rosberg (43) is one of Argentina’s first professional sommeliers and was named “Wine Personality of the Year” by Wines of Argentina as well as being named one of the “50 Most Inspiring People” by La Nación (Argentina’s most important newspaper) in 2017. Andres was a co-founder of the Argentine Association of Sommeliers (AAS) in 2001, serving as its President between 2005 and 2016 and has been a Board Member since then. He also co-founded the Pan American Sommelier Alliance (APAS, in Spanish) in 2007, was its president between 2013 and 2017, and is its VP today. Andres has judged and/or helped organize dozens of national, regional, continental and world sommelier competitions. His ongoing interest in exploring the boundaries of the world of wine led him to organize the Forum del Vino wine fair between 2001 and 2004, the first of its kind in Argentina, and Cavas del Sur, the country’s first rare and limited edition wine auction house, between 2005 and 2007.

Andrés often appears in TV and radio programs as well as being quoted in various media, including the likes of Wine Spectator, Vinum and Decanter. He has run a weekly wine column in a local cable TV channel for almost two years and participated as columnist and host in many radio and TV programs. He has been a member of FIJEV for several years, and has directed the wine department of the Argentine chapter of the Slow Food international movement, and the editor of the wine section of Slow, its quarterly magazine between 2004 and 2008.

His first book, Más allá del Malbec. Conversaciones sobre vino sin dogmas (“Beyond Malbec. Conversations about wine without dogmas”) was published on December 2013, and has been awarded the Best 2013 Wine Book by the country’s most prominent specialized journalists, cooks and restauranteurs. Andrés has also collaborated with Neal Martin, from The Wine Advocate in the organization of his 2012 – 2013 Argentine wine report, and with the texts of the Argentina chapter in the 7th edition of Hugh Johnson and Jancis Robinson’s Atlas of Wine and the last edition of the Oxford Companion to Wine.

Earlier this year, in April, I attended the Universal Whisky Experience in Las … END_OF_DOCUMENT_TOKEN_TO_BE_REPLACED