Alessio, one of Sicily’s most iconic winemakers, will share a first look at the full range of wines from his family’s new estate on Mt. Etna. These high altitude, volcanic vineyards are yielding some of Italy’s most exciting wines, marked by minerality, finesse and elegance. Read more about Planeta’s new Feudo di Mezzo estate here: http://www.planeta.it/en/territori/etna-feudo-di-mezzo/.

The culinary team at Terroni West Hollywood will design a casual, Sicilian-inspired menu to match Planeta’s Etna wines, which will include a traditional method sparkling wine, indigenous whites made from Carricante, and reds from Nerello Mascalese. 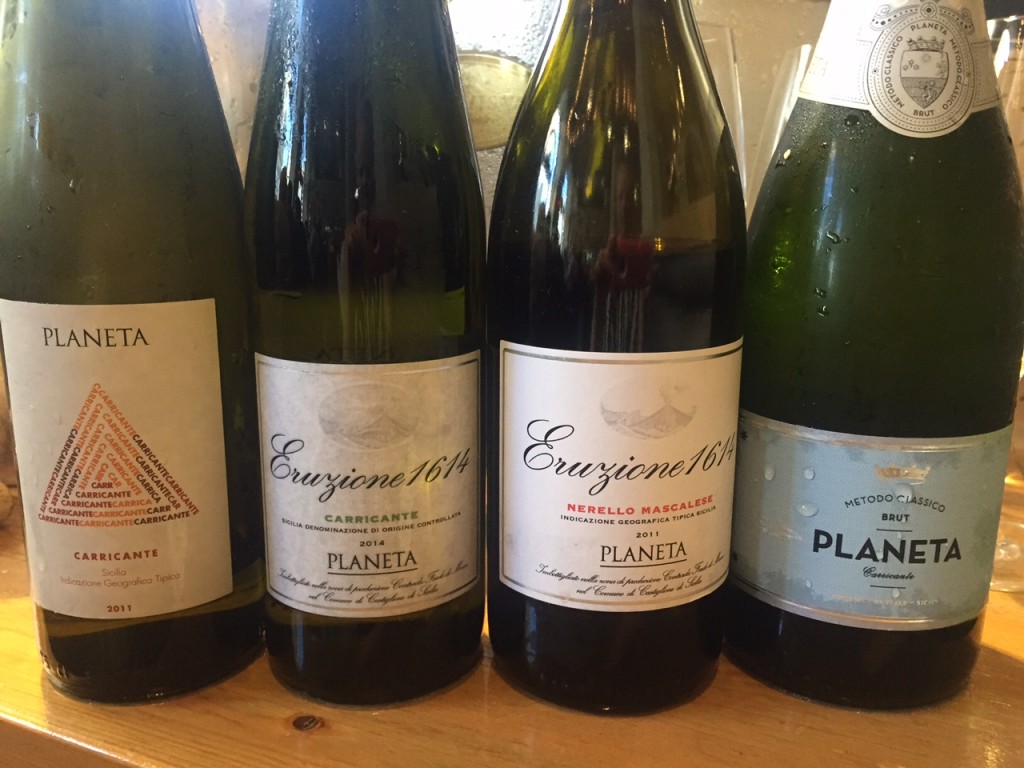 Tasting (aromas and flavors separated by ;

Etna Rosso DOC 2014, 100% Nerello Mascalese – Cherry, stems (indicative of a Pinot Noir) and then a blast of blackberry; tart, dusty and bright at the same time, young, dry. 88 Eve pts.

A couple of thoughts struck me as I went through the above tasting. One was that the two grape varietals were ones I was unfamiliar with, and the other was that their flavor profiles were familiar. In asking winemaker Alessio Planeta more about this I was happy to see that I was on the right track.

First I learned that both of the grape varietals, Carricante and Nerello Mascalese, are only grown in Etna, Sicily.

The white wine grape, Carricante, reminded me of a Spanish Albariño, while the Nerello Mascalese was similar in taste profile to an earthy Pinot Noir. Planeta agreed with my findings, on both counts though he noted more minerality and Riesling qualities to the Carricante. I agreed with him then, especially with the Carricante wines that had been blended with Riesling grapes.

The wines with some age on them were remarkably more developed on both the nose and in the mouth. All were very pleasant as a whole, and worth looking for.

Mount Etna covers an area of approximately 460 square kilometers, which makes it the largest active volcano in Europe, and is the third most active in the world. The surrounding area is an ancient and charming wine-growing zone, which has seen few substantial changes since the days of the ancient Greeks who some 25 centuries ago described it in their legends.

After years of research, Planeta has identified three extraordinary sites. The first is Sciara Nuova, 870 meters above sea level, in the municipality of Castiglione di Sicilia where, due to the altitude, the first grapevines planted were mainly white grapes. At the moment there are about 6 hectares and a fine old winery that will be transformed into an excellent place to receive guests. Then there is Montelaguardia.

Running alongside the Circumetnea railway, there is a small valley of about 10 hectares. Its soil is perfect to bring out the best from grapes grown on the volcano. Finally there is Feudo di Mezzo, in a central position compared to the other vineyards. It will host the wine cellar. The ambitious architectural project sees it – once again – perfectly integrated into the landscape, by building it in an old lava flow. Planeta wines from Mount Etna will soon be produced in this wine cellar.

Soils
The soils have a perfect exposure. Mount Etna’s volcanic soils originated from the slow erosion of the lava stone, ash, and organic matter, and are rich in minerals. The stones of the buildings, millstone and ancient terraces are black too. All around, the woods and more recent lava flows create a timeless atmosphere.

This would be the second year of discovery for us: attending the Mutual Trading … END_OF_DOCUMENT_TOKEN_TO_BE_REPLACED