On the heels of the first Feed SCV Chef Auction where I couldn’t contain my thrill of a wine class with me being purchased for $900 (photo next to these wines), I celebrated a great week with some old pals, and two wines from our cellar. So, though I do like my one bottle posts, this week I give you two. 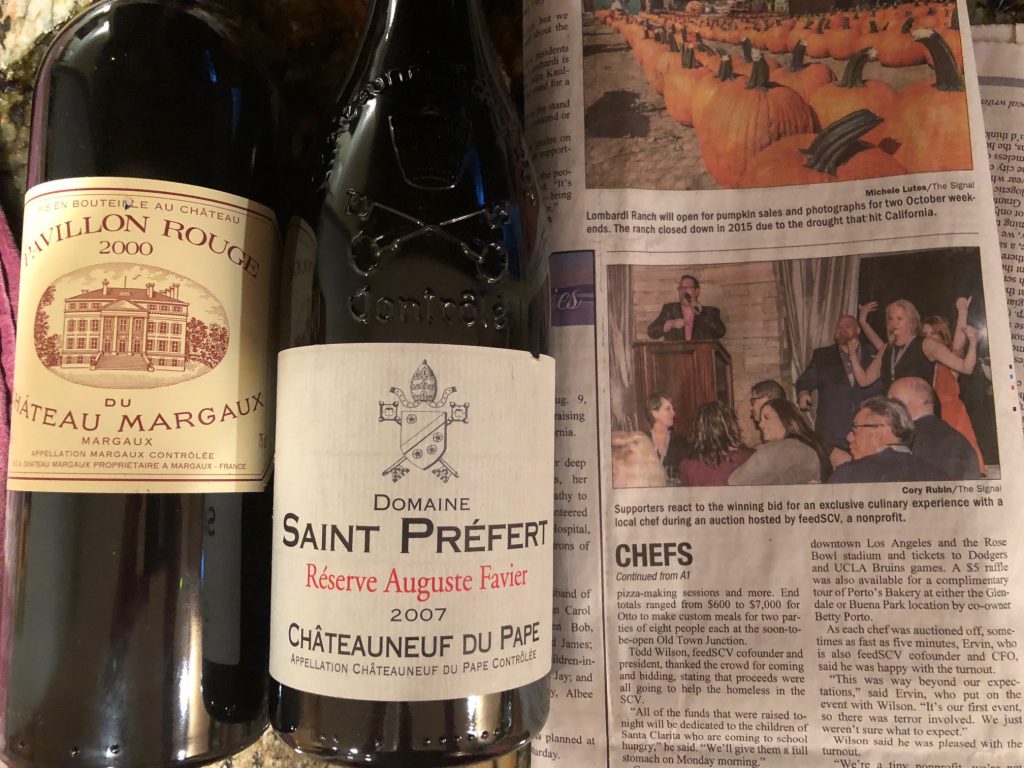 I stole away into the kitchen to sample and review the two wines alone, as is my way so that I can be completely devoted to the task. Then, as my guests asked, I let them know my findings and suggested they sample each before deciding which to start with. For me I thought that the Bordeaux was lighter than the CDP (Chateauneuf Du Pape) in both style, fruit and spice. I enjoyed both, but the chocolate and beer chili I had made for dinner screamed out for the CDP that I presumed was predominately Syrah, followed by Grenache and Mourvedre grapes.

Very dark garnet in color, with aromas of aged red fruit, musty, tri-color peppercorns, earth, cigar, savory beef and pencil shavings. On the mouth I got that same red fruit – with a brighter flavor than expected, along with mild pepper, slightly medicinal, good mouthfeel and good tannin structure. 91 Eve pts.

This 2000 Bordeaux is one of the six 2000 vintages I knew I would be reviewing this year. I had pulled up the Wine Spectator ratings on each of these to compare with my review:

Glorious aromas of freshly picked raspberries, with tiny hints of cream and minerals. Full-bodied, with superfine tannins and a long, long finish of berries and cherries. Super second wine from Margaux. Best Pavillon Rouge I have ever tasted. Best after 2010. 20,525 cases made. –JS

The color began as garnet with a golden brown edge, however 30 minutes in the glass and it became more purple. On the nose there was raspberry, blueberry, mushroom, stewed meats, rubber and earth. It was quite inviting. I was thrilled with what I found on the palate: a huge mouthfeel, just wow, clean and fresh, killer berry fruits and spice rack notes, as well as milk chocolate and a little bit of mint on the finish. 100 Eve pts.

Being a fan of both Bordeaux and Rhone blends I was thrilled to have had the opportunity to sample such stellar older vintages. My husband has the cellar keys, and though I do keep track of the wines in our cellar on a spreadsheet, I didn’t realize we had some older CDP as well as the 2000 Bordeaux I knew we had.

Thinking I need to take another look at the spreadsheet, and our cellar, and soon.

A few weeks ago I received an email from Naushad Huda, the “Voice of Modern Wine … END_OF_DOCUMENT_TOKEN_TO_BE_REPLACED